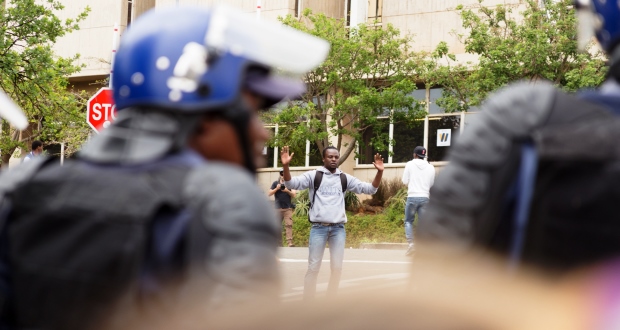 Last Friday, three students were arrested after a computer lab was set alight at the Pietermaritzburg campus of UKZN. There was minimal damage caused by the fire which was swiftly extinguished by University Risk Management Services.

On Saturday morning, another four were apprehended in connection with the fire. The seven faced charges of contravening a court order against violent protest action and appeared at the Pietermaritzburg magistrate’s court on Monday. They will be held in custody until 11 October when they formally apply for bail.

7 UKZNatal students- arrested for burning a laboratory and stone throwing- are making their first appearance at the PMB Magistrates Court.

This brings the tally of arrested students on the Pietermaritzburg campus to 18 students. Eleven students were arrested a few weeks ago and denied bail following violent clashes with police and the fires at the entrances of residences on campus.

The 11 face charges of public violence, failure to obey police orders, assault and malicious injury to property.
They are expected at court again on Monday, 10 October.

At UKZNâ€™s Howard campus, a student was arrested on Thursday for leading a group to disrupt classes. The student is yet to be released as he was unable to get a late application for bail.

student arrested at Howard today was not released, we were unable to get a late hour bail application #UKZN

The 17 appeared at the Lenasia Magistrate Court on Thursday after being detained at the Kliptown Police Station for two days. They were to be charged with contravening a court order which prevents protest action at any of its four campuses.

Sixteen of the students were released but Khumalo remains in custody. This is due to his pending case of assault which cannot be fully withdrawn until his court date on 14 October.

At UCT, nine arrests were made this week. On Monday, six students were arrested for disrupting classes. These students were subsequently released.

On Tuesday morning, two more students were arrested. One of them was student leader, Masixole Mlandu. He was charged for contravening the court order that bars him from campus. The other, Zukisa Sokhaya, faced two charges of assault.

Then on Thursday, Sibusiso Mpendulo was detained facing charges of crimen injuria, intimidation and assault.

The three were taken to the Wynberg magistrate’s court on Thursday. All were released on bailÂ of between R500 and R1, 000 and are expected to reappear in court on 23 November.

And in a twist, student leaders at UCT are planning to lay charges against the university and the private security company deployed by the university for their rough treatment of protest action. The only factor preventing them is a lack of resources.

University of the Witwatersrand (Wits)

At Wits, two students were arrested on Tuesday morning and released that same afternoon.

One of the arrested was student leader, Catherine Busisiwe Seabe, who was reportedly taken into custody for asking questions about the other studentsâ€™ arrest.

Seabe is also named on the interdict that bars students from disrupting academic activity on campus.

At NMMU student, Mpumzi Ndsonde was arrested on Monday morning for obstructing the road to the north campus with flaming tyres. Ndsonde was charged with damage to essential infrastructure. He appeared in court the same day and was released onÂ R200 bail. His case was postponed to the 22nd of December.

Meanwhile, a group of parents and NMMU students intends to take legal action against the university if it doesnâ€™t resume academic activity soon. The university has been closed since 20 September, and the group says it is in breach of its contractual obligations entered into with paying students.

Looking ahead, the court hearing for the UP24 will be held on Monday, 10 October. The UP24 are the 24 students who protested against Afrikaans as a medium of instruction in the #AfrikaansMust Fall protests at the beginning of the year. The students were arrested for public violence and released on bail pending a court appearance.

This is the seventh time that the hearing has been postponed since the arrests were made in February.

Students ask that the case against the #UP24 be withdrawn. It is their constitutional right to strike. #TUKS