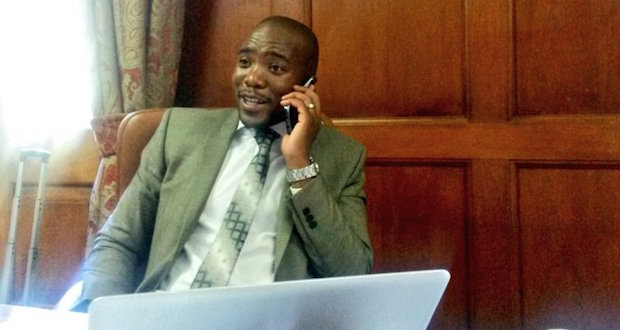 Amogelang Manganyi, 23, medicine student, Johannesburg
I have a few questions for Mmusi Maimane: Who wrote your speech? Are you bitter that you arenâ€™t the president? Why do you talk badly about people in other parties when your own house isnâ€™t in order? Are you Helen Zilleâ€™s new Lindiwe Mazibuko â€“ the new trophy black? And tell me this. After going through post-apartheid transitions for the past 20 years, what does a fixed country look like? Weâ€™ve survived a recession, political power shifts, Eskom â€“ so tell me: whatâ€™s still broken?

Mlungisi Radebe, 26, processor, Rustenburg
When you say that Zuma presides over a broken society, do you consider yourself and Zille as broken people? When you keep on pushing for Zuma to step down, do you think our problems will end once he does? On the issue of land, since the willing-buyer, willing-seller policy failed and whites still hold a majority of our land, what then should we do to properly distribute land equally? Khanyisani Dlomo, student, 23, New Germany, Durban
Many South African citizens believe President Jacob Zuma has cost South Africa too much and is not fit to lead the country. The DA has been calling for his resignation and continues to put pressure on him. Lately, Zuma has been average, people lost faith in him and the ANC â€“ this was reflected in the election last year. It took a brave Maimane to look the president in the eye and tell him that he is broken and leads a broken society. But Zuma is strong and calm. He doesnâ€™t usually respond to insults and criticism. I would ask Maimane what strategic plans the DA can institute to ensure that pupils at the foundation level are well taught by qualified teachers, and have all the resources required â€“ especially in rural areas. Iâ€™d also ask him about plans to root out corruption, grow the economy and create decent and sustainable jobs. Thembiso Phantsi*, 24, unemployed, East London
The DA is always against the president. When can we hear what they want to do for a change, and not what they donâ€™t want the ANC to do? Can Maimane prove that Zuma is a broken man? On what claims can he justify that? Just because Zuma built himself a home in Nkandla, now heâ€™s broken. Maimane cannot say that this nation is broken. How can we trust and see him as our leader when he believes we are broken? This country is not broken, the people who undermine the rules and the constitution make it seem so. The DA will never lead because they undermine the constitution, so they can never have followers because they are destroying the constitution. Dumisani Katiya, 35, prison warder, East London
I donâ€™t see anything wrong with what Maimane said to the president. We have a broken president breaking the nation. Maimane could lead this country because he is objective and determined to keep the state on a straight line. He is educated and cares for the people. You see it in the way he tries to get accountability from our president â€“ he wants to fight corruption, he defends the constitution. I think besides fighting poverty, leaders need to look at the situation in prisons. We as wardens are threatened by prisoners who hit us and we cannot defend ourselves and fight back or else we will be charged or fired. The situation is too often one-sided. Yes, prisoners require rehabilitation, but they need to respect us.

If youâ€™d like to add your voice to the hangout, please send us questions via the comments section, Facebook,Â Twitter, orÂ WhatsAppÂ on +27 72 899 4461Â