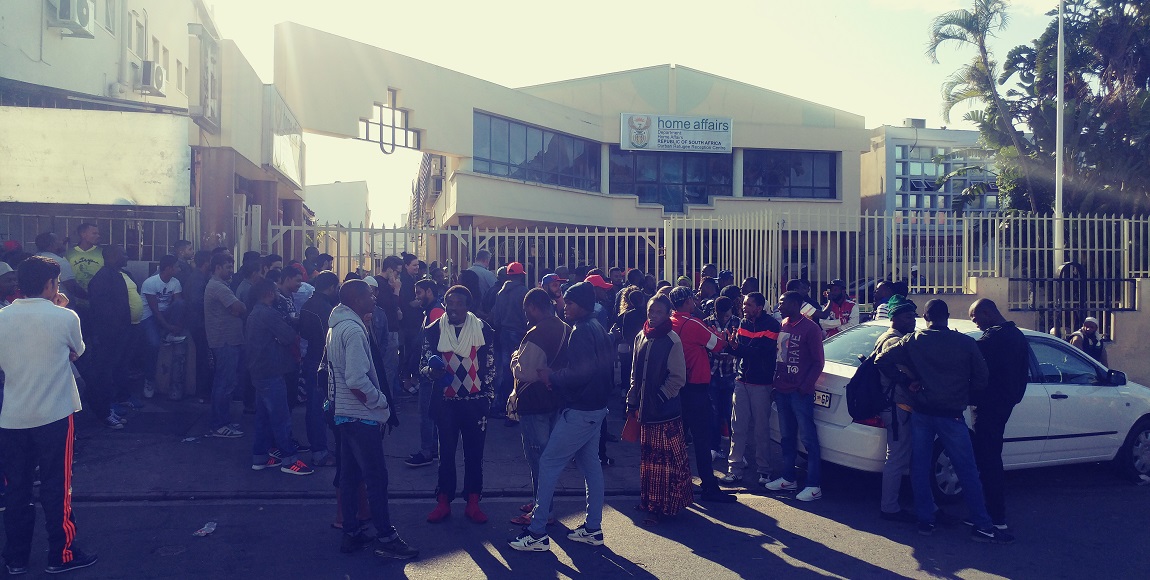 Almost everyday, Moore Road is packed with hundreds of refugees of different nationalities who desperately stand in long queues and some sit on pavements outside the Durban Refugee Reception Centre, with the hope to obtain documents allowing them legal refuge in the country. They describe the process as daunting and hopeless.

“They expect us to produce documents that are impossible for some of us due to the fact that we flee our countries,” said a Congolese asylum seeker who asked not to be named.

He said that sometimes they are being told to come back after five to six months.

“It’s difficult for us when they say we must come back after those months because we hardly have any proof to produce to the police when they search us. We can’t even prove that we are in a process of getting our asylum,” he said.

South Africa is currently home to thousands of refugees, with some being people who flee due to war while others seek economic opportunities.

Standing in front of a locked gate, young and old, men, women, and children, the asylum seekers started shifting away as they saw journalists taking out their cameras. One Congolese national, Muriti Ngoy, asked if they would not get into trouble for speaking after they were approached by a Democratic Alliance (DA) delegation member. The main opposition party conducted an oversight visit on Monday morning.

Ngoy has been in South Africa for the past six years, after fleeing the Democratic Republic of Congo. He told the DA delegation and journalists of the appalling conditions asylum seekers endure at the centre and how the system has failed them.

“Some people flee their home countries due to war but they are still expected to produce documents that they don’t have. Sometimes you come here only to be referred to different other departments to get other papers, and when you come back here but still unable to receive any assistance.

“It’s really hard for us because we don’t understand how the system works. It seems that the South African system is too complicated for us. Maybe if they could explain to us what we need to produce if you’re an asylum seeker or waiting on your refugee status. They are making it difficult for us to be legal in South Africa,” he said.

Another Bangladeshi refugee, Azad Fakhruddin, stays in Port Elizabeth where he works as a shopkeeper. But says he is expected to report to the Durban RRC every three months to renew his permit.

“I don’t earn much and sometimes my salary can’t even cover the travelling expenses between Durban and PE. I am forced to save up from the little that I make so that when it’s time to travel I am able to pay for accommodation in Durban since I don’t have any relatives or friends this side,” he said.

DA shadow home affairs minister Haniff Hoosen visited the Durban Office on Monday to conduct an oversight visit. Hoosen said South Africa has a problem of high number of undocumented immigrants. He expressed concern about the effectiveness of the immigration system on the country.

“The system is not effective and efficient enough to be be able to allow people who come into South Africa as asylum seekers to regularise themselves,” Hoosen said.

He added: “Home affairs in the past had shut down refugee reception centres and people had to travel long distances all the way to Pretoria just to go and regularise themselves. And people don’t have that money, so we end up having a high number of undocumented refugees in various cities in the country.”

Asked what the DA would do about the matter going forward, Hoosen said “We would raise this particular matter at the parliament and make sure that we put sufficient pressure on the home affairs department, to ensure that the asylum seekers who do want to be regularised, there is an efficient way to do so.”

Update: an earlier version of the article stated that the Cape Town Refugee Reception Centre had reopened. According to a spokesperson from Sonke Gender Justice, this is factually incorrect. “The RRO is not open for new applications and is in contempt of the Supreme Court of Appeal court order to reopen to new applicants and be fully-functional by 31 March 2018,” they said.