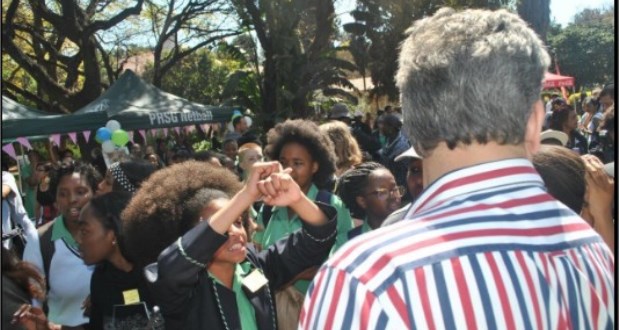 A powerful image of a young girl in school uniform standing up to a man with her arms crossed above her head has gone viral. Her name is Zulaikha Patel. And the image of her defying the policing of black bodies has becomeÂ iconic. Zulaikha’s actions might have been directed at Pretoria High School for Girls, but her story resonates with many others. We tried talking to her, but she was in class. So we caught up instead with her elder sisterÂ AMIRA PATEL, about the protest against the school following its treatment of black pupils.

My parents were upset this morning. My dad was particularly angry and demanded to speak to the headmistress. The school was on shutdown at that moment so parents were not being allowed into the premises. It was tense. My mother has an appointment with the school and governing body regarding Zulaikhaâ€™s hair because sheâ€™s gotten into trouble for her before. Sheâ€™s even been in detention for it.

Zulaikha didnâ€™t do anything for her hair to be like that. I can prove it by providing pictures of her when she was a toddler. She still had the afro. Unfortunately when she was younger, we had to cut her hair because the big afro would cause heat rash.

People are shocked that a 13-year-old girl can pull such a movement at a young age but I think itâ€™s been a long time coming.

My mother is also shocked at this point. My sister has gone through a lot of bullying, sheâ€™s had to change school three times because of her hair. Other children would laugh at her and say, â€œOh my god, your hair looks like a cabbageâ€. It broke my heart.

Sheâ€™d cry everyday when I picked her up from school. Sheâ€™d get home and cry because of how she was treated because of her hair, and say that the school said her hair is a distraction and called it exotic.

Iâ€™m kind of glad that sheâ€™s done this but Iâ€™m also concerned about how itâ€™s going to affect her emotionally at a later stage. I know her, sheâ€™s a very fragile person. What led to her to actually start this movement is the pain that sheâ€™s felt when looked down upon, constantly feeling like she needed to be accepted or change herself to be accepted.

Sheâ€™s been sitting in her room for the past two weeks, studying the school code of conduct. She asked me for information on human rights and childrenâ€™s rights as well. Imagine that? She later shared the information she got on her own and I was surprised. At the time, I didnâ€™t think it was as serious as it is now.

The hair thing was not much of an issue when I was there or maybe we swept it under the carpet. Overall, the schoolâ€™s code of conduct is biased and one-sided; itâ€™s not a system or book of rules that can fit everybody.

Parents wake up at 5am to stand in the queue and register their children into these schools. We fight for our children to be there because we know these as good schools. I myself went to that school and having gone to that school has paved a lot of ways for me. I want the same thing for my younger sister too.

Have you experienced similar discrimination at your school? Talk to us. Email thedailyvoxteam@gmail.com, tweet us @thedailyvox.co.za or Whatsapp us: +27 Â 76 430 5905.