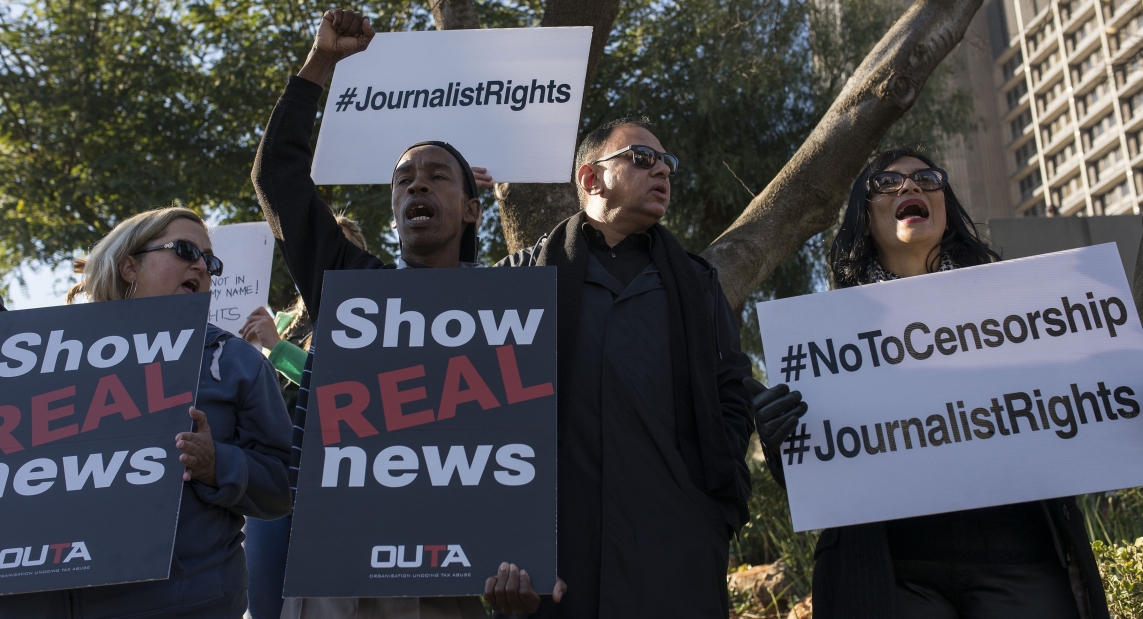 From the large city centres to the rural townships, South Africans are witnessing a nationwide crackdown on their civic rights. Citizensâ€™ ability to speak out, organise and take action on social issues in South Africa is becoming increasingly restricted. For those critical of business and government elites, there are much higher rates of harassment and detention by security forces. Social activist Kgalalelo Gaebee lists five threats to our basic freedoms that we should be concerned about.

1. Policing protests
Recently, South Africa has been experiencing a spate of public protests across the country, including the nationwide anti-Zuma marches, #NotInMyName demonstrations against women abuse, Fees Must Fall protests and service delivery related protests (housing, water, electricity) happening in various communities. While the vast majority of the protests are conducted peacefully and within the parameters of the law, there have been many reported incidents of police using restrictive and excessive measures to curb these protests. During the previous yearâ€™s Fees Must Fall protests, the police arrested 567 students, including the leaders of the protest movement. The police also responded to the protesting students by using excessive force, using rubber bullets and tear gas.

2. Intimidation of whistle-blowers
Activists and watchdog organisations often risk harassment, intimidation, detention, injury and death for exposing corruption and speaking out against extractive and development projects in the country. In what was seen as an effort to intimidate civil society groups, the Helen Suzman Foundationâ€™s offices were raided three days after the social justice group had formally challenged the appointment of Berning Ntlemeza as the head of Hawks at the high court in March last year. In another case, on 22 March 2016, human rights defender and anti-mining activist, Sikhosiphi Rhadebe was shot dead outside his house by unidentified persons. Before his untimely death, Rhadebe was the chairperson of Amadiba Crisis Committee, an advocacy organisation opposing open-cast mining of titanium in the Xolobeni area in Eastern Cape Province by Mineral Commodities Ltd (MRC), an Australian-owned mining company. The Amadiba Crisis Committee feared that the mining operations threatened to displace members of the community and would cause severe health problems for the community members and use up scarce communal water sources. Rhadebeâ€™s death and that of many other human rights activists highlights the persecution and the ultimate price that activists are paying in their struggle for justice.

3. Vilification of civil society activists
There is also a growing trend of the vilification of those working in the civil society sector. Senior officials and some members of the ruling African National Congress (ANC) have in recent times made unsubstantiated statements alleging that non-governmental organisations (NGOs) are backed by Western powers trying to undermine and destabilise South Africa. State Security Minister David Mahlobo claimed that some NGOs are â€œjust security agents that are being used for covert operations.â€ Moreover, according to the amaBhungane Centre for Investigative Journalism, the ANC has adopted â€œa highly conspiratorial report that claims Western imperialist powers are working through opposition parties, NGOs and hash-tag campaigns such as Zuma Must Fall to force â€˜regime changeâ€™ in South Africa and other countries of the region.â€

4. Silencing dissent
Those in power tend to deny members of civil society safe space to voice dissent. In particular, the CIVICUS Monitor shows how in an attempt to curtail critical voices, private companies, states and others are restricting active members of the society from speaking out. Investigative journalists usually bear the brunt of this crackdown on freedom of expression.

Journalists Suzanne Venter, Vuyo Mvoko, Sipho Masondo, as well as Mzilikazi wa Afrika are some of the reporters who have received death threats for exposing high-profile corruption scandals. Judicial harassment is also a common tactic employed by those in power to silence dissent. Currently, a subsidiary of Australian mining company MRC, known for its attempts to mine mineral sands at Xolobeni on the Wild Coast, is suing the Centre for Environmental Rightsâ€™ attorneys for defamation.

5. Proposed non-profit organisation legislation
Although it hasnâ€™t been signed into law, non-profit organisation (NPO) legislation has been seen in the civil society sector as a legislative measure to clamp down on South Africaâ€™s non-profit sector. Should the bill be adopted, many fear that the government will impose stricter controls over the NGO sector and, specifically, make it more difficult for NGOs to receive foreign funding and for international NGOs to operate in South Africa.

So how does South Africa compare to the rest of the world?
South Africa is not the exception. In both authoritarian and mature democracies, civil society rights violations are occurring on a global scale. These legal rights are being violated in 106 countries, where civic space is considered to be Obstructed, Repressed or Closed. Unfortunately only 3% of the world’s population lives in a country where all civic rights are respected and protected.

Kgalalelo Gaebee is a social activist based in Johannesburg, South Africa. She works for CIVICUS: World Alliance for Citizen Participation, which helps monitor and investigate civil society rights violations around the world.