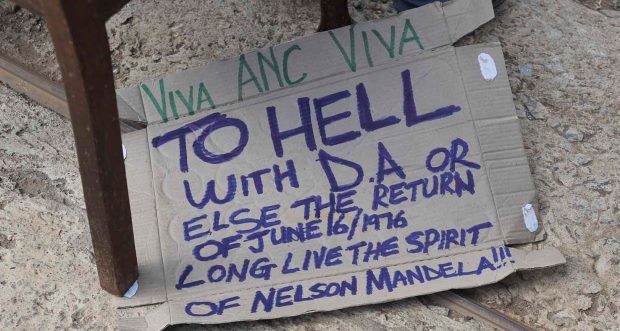 Aubrey Matshiqi is a rockstar columnist, political analyst and researcher. Heâ€™s written a fantastic paper ahead of this yearâ€™s elections, on the false dichotomy between rationality and identity. Itâ€™s a mouthful, we know. So we read it for you, and here is our TL;DR version.

You only have to look at this past weekendâ€™s stadium wars aka final campaign rallies to understand the tendency to reduce votersâ€™ views, interests and preferences to caricatures.

Voters, unlike what the party propaganda machines will tell you, are not simple beings, and their electioneering ignores the real complexity driving peopleâ€™s politics.

And here, weâ€™ve got to fault what we call â€œpolitical analysisâ€ in South Africa. There is a tendency to draw on the same people, with the same world views. Itâ€™s sort of like how all your Facebook friends like the same stuff, so Facebook only brings you stuff in your newsfeed that it thinks youâ€™ll like. Itâ€™s what the cool kids are calling the filter bubble.

Our exposure is restricted to people with similar thoughts, feelings, experiences and worldviews.

The more religiously devoted one becomes to these group sentiments, the less likely those views are to be critical or thoughtful. So what this then translates to in SA, is the formation of isolated groupings, with views that never fully engage with anything outside of it. Our political discourse then is sometimes thoughtless, lacking in nuance and complexity because it is never challenged or interrogated with exposure to fully developed contrarian views.

South Africans have been unable to imagine a future of SA without the ANC and DA. This has caused some to see the issue of our electoral politics as an â€œeither/orâ€ matter between the two parties and what they represent. Among these people are those who believe that the quality of SAâ€™s democracy will improve the day most of the black population vote for the DA.

Related to this idea is the argument that ANC supporters vote with their hearts. The assumption is that a vote for the DA is a rational decision, rather than an emotive one.

But that argument misses the point because:

1. White voters kept the National Party, with increasing majorities, in power for forty-six years.
2. This means that for the past 68 years, South Africa has not had a strong opposition – of course weâ€™re excluding the decades of struggle against white minority rule.
3. In the space of just a decade or three general elections, between 2004 and 2014, the ANC lost thirty seats in the National Assembly. Itâ€™s cold outside the party

There is an over-reliance in South Africa on party politics.

For the opposition, therefore, the only means by which change can be achieved is through the removal of the liberation movement â€“ which in our democratic setting, is embodied by the ANC. This means that success in this narrative of the democratic project is dependent on opposition forces joining forces around the dominant opposition party â€“ which is currently the DA.

Success, under this understanding, is about the alternation of power between two dominant parties fighting for control, over the same â€œmotive forceâ€. As the ANC argues, â€œthe peopleâ€, particularly those who are not just â€œblack in generalâ€ but are also â€œAfrican in particularâ€, constitute the motive force for the National Democratic Revolution, of which the anti-apartheid struggle was simply one part of. Beyond the apartheid struggle lies the historic mission of creating a society that will be the complete opposite of apartheid society â€“ but which in itself must also prove to be better than life under apartheid.

By limiting the legitimacy of the political sphere to party politics, efforts to push for social change through other means are often overlooked as realistic avenues for change.

The challenge for political parties then, is to avoid the error of thinking that those who vote for the ANC have a fixed identity and recognise the fact that politics in general, and electoral politics in particular, will be shaped by the evolving identities and complexities of citizens in their lives as voters and nonvoters.