Home Features Itâ€™s back to school in Vuwani – in shared classrooms and under...
WhatsApp
Facebook
Twitter
Email
Print 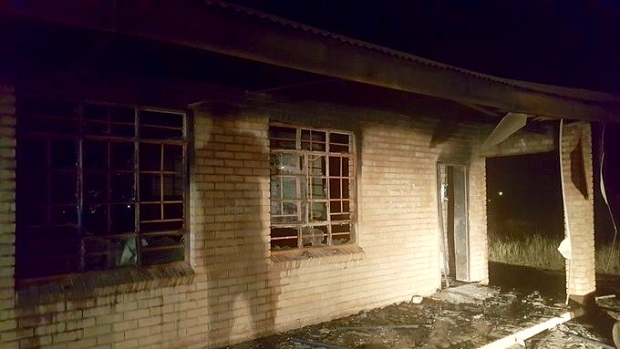 Four classrooms at a school in Vuwani, Limpopo, were torched ahead of the reopening of schools in the district following school closures in May.

The Mugoidwa Secondary School is the latest of the more than 20 schools that have been burnt down and vandalised by Vuwani residents in protests against a Municipal Demarcation Board decision to merge municipalities.

The latest arson attack does not appear however to have affected the planned resumption of classes.

Learners were back in class this morning, with some pupils having to share classrooms while others are learning under trees.

The Department of Basic Education spokesperson Elijah Mhlanga said the attack was disappointing and discouraging as efforts to end violence suffered a major setback again.

â€œNothing is going to stop us… We are going to work closely with the community to make sure that we isolate people who are doing this, because it has gone beyond comprehension. It has gone to a point where, we really need to take drastic steps to ensure that we restore our education, we show respect on the future of our children,â€ Mhlanga said.

Itâ€™s not just the department that expressed dissatisfaction with the torching of yet another school in Vuwani.

Burning of schools erupts again in Vuwani. Why target centres of education in voicing dissatisfaction? Do children not matter anymore?

If you went to school, received education and passed your grades it will be hard to set a school alight, let alone a book #Vuwani

Burning of schools and what kids learn from this ably captured in this cartoon about Vuwani folks.

As part of the ongoing protests against changes to municipal demarcation, many residents boycotted the local elections and opted to attend a community sports day. Approximately 1,600 out of some 40,000 residents that had registered to vote showed up at the polls.

Ten out of the 56 voting stations in the area returned zero results. Although nine of the voting stations in the Makhado municipality would not be part of the new municipality, residents stayed away in solidarity with Vuwani residents. Â The ANC won the disputed municipality in which Vuwani is situated, despite the boycott. It was also reported that a by-election will be held in one ward because the ward councillor had died after the candidate nomination lists had closed, but before the elections.

Mhlanga said the department is confident that with the cooperation of all stakeholders, they’ll be able to recover and normalise the learning programme in Vuwani. The department is implementing a catch-up programme for pupils in Grade one to 11 while the grade 12 pupils were taken to camps a month ago in an attempt to catch up.