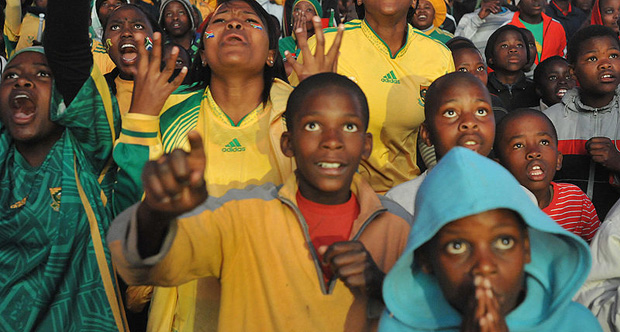 Hlompo Kekana’s wonder goal against Cameroon over the weekend may have left us in awe but Bafana Bafana fans know too well that it will take more than just individual brilliance to win Tuesdayâ€™s return-fixture at Moses Mabhida stadium. It is a must-win after all, and our only chance of reaching AFCON 2017. And, as ALICIA PILLAY puts it, it about damn time that they do so too.

Kekanaâ€™s 55 meter-long-potshot has seen him become an online hit (mind the pun) with the video of the goal swirling, curling and crawling across social media.

Why the desperation?
Bafana Bafana are currently third on the log in group M with just two points. Our opponents lead the group and Mauritania are second. The game has now become a must-win with this three games to go and only 9 points left on offer.

What does Shakes say?
Coach Shakes Mashaba allayed fears of failing to qualify for AFCON 2017 saying that the team has a lot of self-belief and that they are confident of getting through. Which doesnâ€™t really mean much.

By the way, Mashaba needs to qualify for AFCON 2017 as this is one of his mandates. A loss to Cameroon could see South African fail to make it to Gabon and it maybe say goodbye to Bra Shakes. And he wouldnâ€™t be the first. There have been 16 national coaches since 1992, and the national team hasnâ€™t really given the supporters much to shout about overÂ the past few years.

What can we expect?
Honestly, Bafana Bafana fans have become so used to mediocrity, itâ€™s hard to know what sort of expectations weâ€™re allowed to have of them. We get excited when we score. Even if it’s own goals. Ah, Pierre Issa, where did you go?

Most young Bafana fans would have no recollection of their team actually winning anything, kind of like your average Liverpool fan (me being one). Fans could be forgiven for thinking theirs is a lifetime of collective punishment.

Why Bafana MUST win
Winning against Cameroon could catapult the side into qualifying. That in itself would be a remarkable achievement. It will lift both the team and fansâ€™ spirits.

South Africa boasts one of the best football leagues on the continent but this hasn’t meant a strong national team (like England).

Everybody loves history
Twenty-four years ago Bafana Bafana played the same opponents in Durban for the first time since readmission and won. It’s time for history to repeat itself.