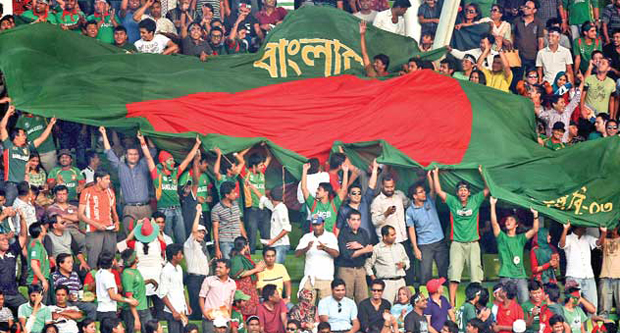 The Bangladesh cricket team inspires a nation: every time they set out for a tournament, we pray till the last ball is bowled. Even amid the chaos of the political instability that dictates our lives, during the cricket World Cup you notice people gathering in groups at every olee goli (alley) or in homes watching cricket on TV or intently listening to the commentary on the radio. RIFAT ISLAM ESHA spoke to cricket fans about their hopes and dreams for the Bangladesh team â€“ and who theyâ€™ll be supporting should the Tigers get knocked out. Shah Newaz, 62, consultant, Dhanmondi, Dhaka
We obviously want our country to win and do well. But there are two things at work here: one is our hope and the other is whether or not we are capable of winning. Yes, Bangladesh did play well against Afghanistan, but there is something we should also keep in mind â€“ who the team Bangladesh played against. In my opinion, the four semi-finalists will be Australia, New Zealand, South Africa and India â€“ whether we like it or not. From these teams, I would choose South Africa and India. And if you ask me to choose one, I would obviously pick our neighbouring country, India. Although I have been supporting South Africa like a fanatic for years, now, to be honest, I donâ€™t know all the players that well. South Africa is also infamous for playing well but not making it at the end. Nahian bin Asadullah, 30, journalist, Uttara, Dhaka
I really hope the best team wins this wonderful tournament and gets the trophy. With the minnows performing well, the tournament has become wide open. In modern-day cricket, any team really can cause an upset on their best day. Being a Bangladeshi, I obviously donâ€™t want to see my team knocked out of the tournament. But if that does happen, Iâ€™ll be rooting for Sri Lanka and South Africa. South Africa is a wonderful unit; they are a thoroughly professional and a brilliant fielding side. I definitely rate them very highly, and I see them as one of the hot favourites to lift the trophy this time. MD Kawsar Ali, 45, chauffeur, Muksudpur, Gopalganj
I watch the matches on television and when I am on duty and out with friends I hear them on the radio. Of course, I want Bangladesh to win. I want our team to bring the title home: they have gone so far. Iâ€™ve always wished and hoped our team wins, you know. I really like West Indies and, if Bangladesh loses â€“ God forbid â€“ I want them to win. I donâ€™t know why but I have always supported West Indies â€“ they always play well and work hard. Sushmita S Preetha, 26, activist, Sonargaon, Narayanganj
Well, I canâ€™t say that I have unrealistic expectations from Bangladesh but, win or lose, I would like them to play good cricket with consistency and humility â€“ that includes not losing their head under pressure. If not Bangladesh, Iâ€™d like South Africa to take the cup. Iâ€™ve been an avid South African fan since I was a kid, and I still feel emotional every time I think about that calamitous 1999 World Cup semi-final and the last run-out involving Lance Klusener and Allan Donald! Despite having solid teams, I donâ€™t know why they always lose tragically towards the end. Maybe the curse will finally be lifted from South Africa. Go Proteas! Naziba Basher, 24, reporter and actress, Dhanmondi, Dhaka
I have the same hope every World Cup â€“ to discover new talents, to have new players to be excited for, new reasons to love the game more. As much as I want Bangladesh to win, I hope for any deserving team to. I will support India if Bangladesh loses (once a Sachin fanatic, always a Sachin fanatic). South Africa has always been one of the strongest opponents in most World Cup tournaments, with some of the best players around the world, includingÂ  Hashim Amla, AB De VilliersÂ andÂ Dale Steyn. I would say, if Bangladesh or India donâ€™t win, Iâ€™d want SA to win, mostly because I adore Dale Steyn! Ferdous Quawser Pathan, 27, Mansurabad, Dhaka
I expect a better tournament in terms of competitive matches. There are a lot of potential champions: Australia, South Africa and New Zealand. I want to see competitive pitches that offer something for both bowlers and batsmen â€“ that is something that was missing during the last World Cup. The pitches where they played in 2011 [on the subcontinent] seemed too much in the batsmenâ€™s favour. If Bangladesh gets knocked out, I am torn between South Africa and New Zealand. South Africa has a very good squad. I actually predict they will win the tournament. Rifat Islam Esha is a Bangladeshi poet and feminist with a middle-child syndrome.Â  You can follow her on Twitter at @rifat_islam.

– Featured image: By Leemon2010 via Wikimedia Commons.
– Image of Preetha by Prabir Das; Image of Basher by Ridwan Adid Rupon; Image of Pathan by MR Rana. All other images: Supplied.
– Voxes have been edited for brevity and clarity.