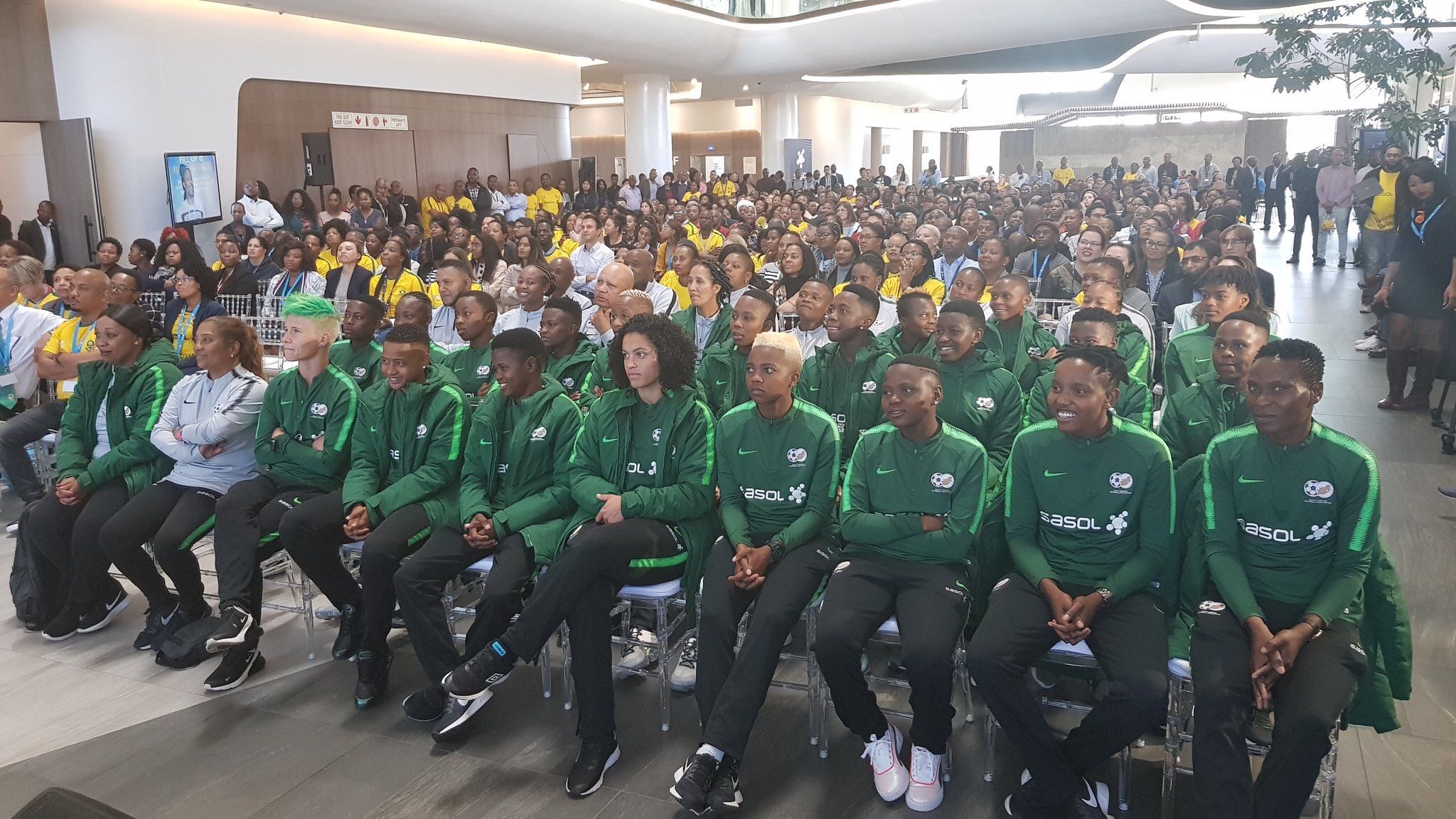 Hosted by their sponsors Sasol, Banyana Banyana were treated to a fantastic send-off in Sandton hours before they jetted off to France.  There was singing, dancing and even a praise singer from the Mzansi Youth Choir. The team were visibly overwhelmed by the support and cheers from the crowds

The South African women’s soccer team will be playing in the 2019 FIFA Women’s World Cup in June. This will be the team’s first World Cup and there is much anticipation around their performance.

Coach Desiree Ellis who has been leading the team since 2016 said the team didn’t realise the magnitude of what they did by qualifying for the World Cup.

“When we reached Oliver Tambo, that for me was the ice-breaker. The messages of support we got from everyone – really keeps us going,” she said.

Ellis said her team will never give up: “We will make sure that when we leave that World Cup, people will remember who we are. People will say what a team, and what fantastic football they played.”

The South African women’s team for this World Cup in 2018. They completed qualification after beating Mali in the semifinals of the2018  AFCON Women’s Cup. This will be South Africa’s first ever World Cup. Banyana are the current Cosafa Cup Winners having won it two times in a row.

Banyana have been drawn in Group B along with Germany, China PR, and Spain. Banyana’s opening game will be against Spain on June 8.

In anticipation for the World Cup, Sasol has been hosting the Fill-up and Fly campaign. With the competition, people were encouraged to spend R300 and more at a Sasol station to be entered into the competition. The winners will be going to France to watch the team in their three group stages matches.

During the send-off, Sasol’s Muhammed Carrim recounted how captain Janine van Wyk was encouraged by a petrol attendant to enter the competition. She replied to him saying she has a VIP ticket to France.

Van Wyk said qualifying for the World Cup has been an emotional journey for the team.

“We can finally say through all our challenges, and failures that we have finally qualified for a World Cup,” van Wyk said.

Van Wyk said they will be fighting every moment to succeed, knowing that the country is behind the team.

Sasol who have sponsored the team for the past ten years hosted the send-off at their offices. It was attended by the team, officials from the South African Football Association (Safa), and the United Nations. There was an electricity in the air as the team entered the room to huge cheers from all gathered.

Sasol went into partnership with Safa in 2009 – officially launching its sponsorship of the national team. They also sponsor a women’s soccer league.

The sponsors along with Safa also launched the #Limitless campaign. The campaign aims at creating more support for, and inspiring participation in women’s football. It highlights the contributions individuals are making to grow women’s football in South Africa.

As part of the #Limitless campaign, fans can send a message of support to the team. Fans can register on the Sasol website and send the message. Every supporter will receive a Banyana Banyana avatar with the 10 supporters with the best messages will stand a chance to win a Banyana Banyana jersey signed by the full squad.

Safa President Danny Jordan used the send-off to announce that the match fees and bonus structure for Banyana at the World Cup. Jordan said a total prize R7.3m is to be spent on Banyana. He confirmed that this will be the same for both men’s and women’s teams.

“It’s not about the money, it’s about the history you’ll be making,” Jordan told the players.

He did warn the team that the association expects them to fulfil many more targets including being amongst the top teams on the African continent and in the world.

The Women’s World Cup will be from June 7 to July 7.