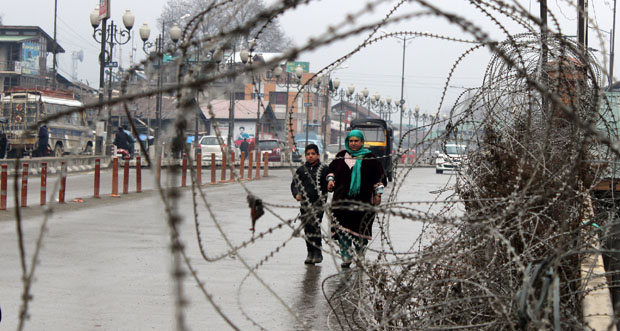 Barbed wire is a common sight in Indian-administered Kashmir. More than 25 years ago Indian troops sent to suppress militant groups embarked on an armed struggle for independence first set up barricades made with barbed wire around bunkers and camps. Today it is everywhere, and injuries to children and adults who have accidentally walked or run into it are common.

The Hurriyat Conference, an alliance of political and social groups seeking self-determination in Kashmir, last year filed a petition before the stateâ€™s Human Rights Commission seeking the removal of the barbed wire from major roads and thoroughfares in the interest of safety. No action was taken. Bunkers fenced with barbed wire are manned by army or in the main markets of Srinagar and in major towns in Kashmir. Whether in busy markets or bus stations, most Kashmiris have simply accepted the barbed wire as part of their lives. In city squares, parks and gardens, barbed wire is still found tied around trees, plants and shrubs, supposedly to prevent people from gathering in public spaces. In places where army bunkers from years ago have been removed, the barbed wire that fenced them off still remains, causing injury to pedestrians. At various points, where barbed wire from bunkers was removed few years earlier, it is still found there lying haphazardly causing hurdles to the free movement of the people and very often injuring them or cutting their clothes. Barbed wire even tops fences around graveyards. Why is anyoneâ€™s guess. Bilal Ahmad opened a store at a railway station in his village expecting good business, but immediately after the station was made functional in 2009 a barbed wire fencing was installed in front of his store.

â€œI donâ€™t understand why the railway station was fenced with barbed wire from my side when its other three sides are completely open. I tried to convince the concerned officials to cut it few a yards in front of my store as it was no security threat to anyone, but they did not allow it,” he said. On special occasions like Indian Independence and Republic Day, security at strategic points is beefed up with temporary barricades made of still more barbed wire. On call for marches by pro-freedom parties, armoured policemen are stationed and barbed wire installed at every nook and corner to impose curfew and prevent the free movement of people. Rolls of barbed wire, kept ready for use by the military, can be found lying in footpaths or outside parks in Srinagar. After the major floods in Kashmir in September last year, which caused huge damage to houses and buildings, barbed wire has gathered at various points in the city and has not yet been removed.

Afzal Sofi is a journalist in Srinagar, Kashmir.