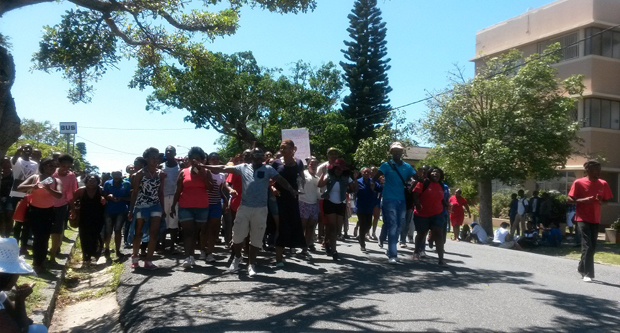 A violent strike at the Buffalo City FET College (BCC), East London, ended on Tuesday after management came to a settlement with the Studentsâ€™ Representative Council (SRC).

The college was closed on Thursday last week after a petrol bomb exploded and a fire erupted at the schools administrative centre during a protest.

The protesting students wanted funding for textbooks, transport allowances, and accommodation at school residences and hostels.

Students who had not been approved for housing at the college had been occupying hostels and residences without permission and were issued with a 30-minute ultimatum to vacate the premises by officials and threatened with physical removal. In the end, the college did not follow through with its threats of eviction but tensions continued to run high. Students had long been made aware of the lack of additional funding for transport or accommodation â€“ a newspaper advert posted in the Daily Dispatch on Friday, 9 January, had warned students that the college had limited funds.

Principal Dharamchand Singh told the Daily Vox via email that the college was not in a financial position to help additional students but that it was seeking alternatives.

He told The Daily Vox: â€œThe college is in the process of requesting extra funding from DHET [the Department of Higher Education] and NSFAS to fund the shortfallâ€.

Students have been given until Friday to resubmit applications for bursaries.

Singh said that while peaceful strikes were legal, they still caused students and staff to lose teaching and learning time

â€œI do not agree with illegal and violent strikes. I am of the view of sitting around the table and finding solutions,â€ said Singh.

The management team, he said, â€œ[engages] with the SRC on a regular basis to resolve student issues timeously. Furthermore, I implement the policies and legislation of our government and I cannot deviate from them.â€

The SRC said it had called for a strike because it had felt its demands had not been heard.

â€œWe felt we have exhausted our channels of communication, and that is why we decided to strikeâ€, said Mpumelelo Sicatsha, the SRC secretary-general.

According to the SRC there are 200 students in need of accommodation, transport money and textbooks. It says about R7-million is needed to cover these costs.

The details of the settlement are unconfirmed, but according to SRC officer Nkosinathi Ndevu, the college agreed toÂ pay students who do not have accommodation aÂ R1,200Â housing subsidy.

The Daily Vox was, however, unable to confirm the details of the settlementÂ with Singh.

Meanwhile, classes have resumed as normal.

â€œEven though some students are complaining that this amount is little, the majority of students are pleased to be going back to class,â€ said Ndevu.

– All images: By Bongiwe Tutu.