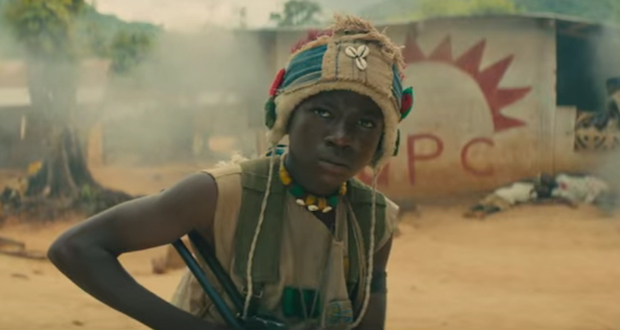 Idris Elba shines in Beasts of No Nation, a flawed but deeply moving film about the coming of age of aÂ child soldier in a conflict-ridden West African country, writesÂ PHILIP OWIRA.

When Hollywood takes on African conflicts they often mess it up. Films often include one-dimensional characters, everyone speaking English with funny accents, the smiley African who needs to saved, and the white personÂ who will save the needy African from the evil rebels or corrupt government. Hotel Rwanda, Tears of The Sun, Blood Diamond, and Machine Gun Preacher are among the worst films about Africa that Hollywood has ever made.

When I first saw the trailer for Cary Joji Fukunaga’s Beasts of No Nation, I thought to myself â€œHell no! What the hell is this?â€

The English-speaking characters were the first thing to put me off. There’s nothing wrong with English-speaking characters, and I know that many production companies choose to film in English, because it makes the film easier to sell and market. After reading the write-up that accompanied the trailer, I had no interest in seeing the film. To me, it looked like one those films that over-simplifies complex African conflicts.

But last Friday, Beasts of No Nation came up during a lunchtime conversation at the School of African Studies in London, where I am studying. Two of my classmates had already seen it, and they were trying really hard to convince me to watch it. I told them about my reservations, and that I doubted it would live up to Kim Nguyen’s War Witch and Abderrahmane Sissako’s Timbuktu, which I regard as theÂ gold standard when it comes to depicting recent African conflict. My classmates insisted, and I eventually gave in to their demands. And that’s how I came to watch one of the most powerful and difficult films I have ever seen.

Beasts of No Nation is the first ever feature produced by the video streaming company Netflix, and was adapted from a novel of the same name.Â The story is told through the eyes of Agu, a young boy living in aÂ war-torn African country, who is forced to make difficult decisions in order to survive theÂ conflict.

The country where the war takes place is not mentioned, but what is depicted on screen has striking similarities to war that took place in Sierra Leone in the late 90s.

His mother and infant sibling have been sent off to the capital and areÂ not heard from again and heÂ isÂ orphaned after his father and brother, falsely accused of siding with rebels, are killed.

Agu flees into the forest, where is captured by a group of mostly child soldiers lead by a man known only as The Commandant (played by Idris Elba). Agu is recruited to become a child soldier and we witness his transformation from an innocent boy to a ruthless killer.

The story of Agu’s coming of age in the midst of a war reminded me of Steven Spielbergâ€™s Empire of The Sun, except it wasÂ more extreme. A few people have also compared it to City of God, the disturbingly violent 2002 Brazilian film directed by Fernando Meirelles. One scene involving the rape and murder of a mother and daughter by child soldiers, is probably one of the worst things I have ever seen on screen, and I am finding it very difficult to get it out of my mind.

Despite the difficult subject matter, itâ€™s the two lead actors that make the film work. Idris Elba is at his very best, as he plays the charismatic and morally dubious leader of the child soldiers. ButÂ itâ€™s the performance of first time Ghanaian actor Abraham Attah, who plays Agu, that steals the show.

The film is not without its flaws. Noah Tsika, writing for the blog Africaâ€™s A Country, raised several concerns about the film, one of which is the language issue. The films opening act features characters speaking Twi, a language spoken mostly in Ghana. Apart from the opening narration, English is hardly spoken in the first chapter of the film. However, after Agu flees and is captured, the Twi is discarded and English becomes the language of choice. Not a single character speaks Twi for the rest of the film. To me, this made the story less credible.

Despite the excellent performances, the compelling storytelling, the evocative cinematography, and the haunting musical score, the film still fails to authentically capture the world it’s trying to portray.

The first chapter of the film also feels a bit rushed. We donâ€™t spend enough time with Agu and his family to care about his life before becoming a child soldier. Itâ€™s the part of the film that gives you an indication that film was made by outsiders, who are foreign to the subject matter. From the dinner table conversations to Agu getting into trouble for selling his parts of his fatherâ€™s television set, the film fails to accurately capture the nuances of West African family life.

We also donâ€™t get to fully understand his culture, his family background, and the circumstances which lead to the death of some of his family members. Basically, the first act of the film feels like an overly produced advert for Oxfam. All of this could have been avoided if the filmmakers had simply been brave enough to set the conflict in a real country, and not a mish-mash of generic West African locales.

Despite its flaws,Â Beasts of No Nation has raised the bar on how stories of African conflict are told and is one of the best films I have seen this year.

Philip Owira is completing his masters in African politics at the School of Oriental & African Studies, University of London.