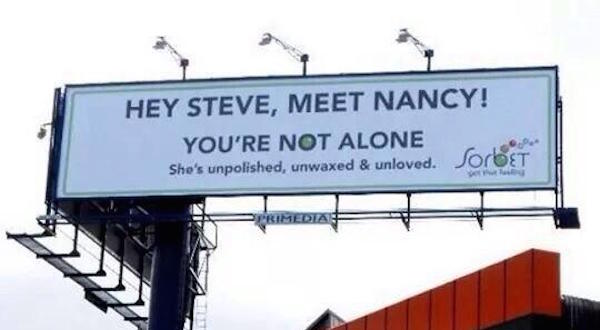 The latest marketing campaign from Sorbet Group, which describes itself as being “at the forefront of professional grooming, for women and men” since 2005, is a bit of a head scratcher.

The campaign revolves around Nancy, a woman Sorbet describes as â€œunassuming and ungroomedâ€, “a consumer that needs a little push in the right direction” – towards their salons, to have her body waxed, buffed and shined, at a price of course, lest she find herself “unloved”.

According to a Sorbet press release, the campaignâ€™s goal is to â€œeducate the aspirant female grooming generation on the importance of being well-kempt in business, home and lifestyle.”

Because of course, women need to be educated about how unlovable their bodies are when left in their natural state.

Marketing manager Jade Kirkel says: “At Sorbet we believe in regular manicures and pedicures, waxes, facials and massages – not only because it looks good, but because it promotes the ‘feel-good’ factor we’re all after.”

The beauty salon group must have been surprised to find that South Africans weren’t buying it.

@Paulachowles @SorbetGroup I take issue with this new campaign too. It smacks of sexism.

@Paulachowles the entire thing has unreal levels of sexism. read the marketing bumf in the second link.

Sorbet Group quickly issued an apology on Twitter, albeit a rather lame one.

But if Sorbet thought it could brush this off so easily it had another thing coming.

It’s surprising that a business that makes its money almost entirely from the patronage of women could be so tone deaf to issues of body image and body politics but whatever, #sexistSA. This Nancy is quite happy the way she is.