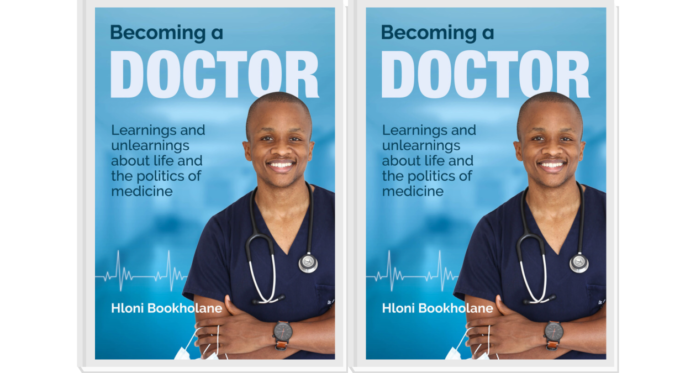 In his book, Becoming A Doctor, Hloni Bookholane speaks about his life and learnings in his journey to become a medical doctor. The book follows him from a student to intern at the Groote Schuur Hospital to going to study at one of the best schools of public health in the United States. The Daily Vox chatted to Bookholane about his book and journey.

What inspired you to write a book about your medical journey?

You go into medical school, knowing you’re going to learn how to diagnose and treat patients. But I never expected to learn all these other life lessons that come with it. I learnt how to speak to people in their time of need, what facilitates how you treat and diagnose. More than that, I learnt how to take into account the multitudes of factors that can influence the person when you meet them at that point. They might be going through psychological, emotional, and financial issues which result in their medical problem.

I learnt how there’s more to the patients than their medical conditions. I saw how they’re influenced by all these different factors that they bring with them to the hospital.

“Being a junior doctor in South Africa is an incredible privilege, it really is. We get to play a part in saving and enhancing lives, and often we get to welcome new life into the world… However, medicine is also mentally and emotionally taxing. Being involved in unsuccessful resuscitations, certifying deaths, seeing multiple patients’ clinical conditions deteriorate and breaking the bad news of terminal cancer to a patient – I have done all of the above, sometimes on the same day.” [Extract from Becoming A Doctor]

Read more: Covid-19: A day in the life of a medical intern

For those who want to be doctors, what advice would you give them to stay healthy – both physically and mentally?

Firsty, it is important to know the full spectrum of what you’re going to go through as a medical student and then as a junior doctor. Secondly, it’s about identifying those feelings. You know when you’re feeling catastrophic or you find yourself going from one failed resuscitation to the next. It’s also important to speak to those around you, whether it’s your colleagues or your loved ones instead of moving swiftly along when something traumatic happens. Doctors also need to seek professional help, we’re not infallible people.

Bookholane was awarded a Fulbright Scholarship to pursue a masters in public health at John Hopkins Bloomberg School of Public Health in the United States.

What are the differences you noticed between the United States and South Africa in the medical systems?

The United States health system is very complicated. I did an introductory course on US health policy and it was a lot to take in. What may be similar is that the people most affected tend to look the same like those who are in South Africa – Black and Brown folks.

In South Africa, if you’re in a public hospital, whatever service you get employed or unemployed, the government pays that bill. Whereas in the United States there’s a big financial barrier. If you’re not on Medicaid or Medicare, you need to have medical insurance to pay for that bill.

Read more: What repealing ‘Obamacare’ will mean for Americans, and us

There are more financial barriers in the US than they might be here but still the similarities remain the same. Black and Brown people are still minorities who are marginalised. Unfortunately Black and Brown people in the US are the minority whereas in South Africa, [they are the majority] but they are the marginalised. Yet it’s the same demographic suffering unfair consequences.

What’s next for you?

The stuff that really gets me excited and gets me impassioned lies in the Academia of medicine, the health policy and legislation around healthcare and access. That’s what I want to embed myself in going forward.

The book is available at all good bookstores and online.

About the author: Hloni Bookholane completed his medical degree at the University of Cape Town. He was awarded a Fulbright Scholarship to pursue a Master of Public Health at the Johns Hopkins Bloomberg School of Public Health in the US. He is passionate about medicine with a specific focus on organ donation and transplantation policy.