Home Voices Being gay in Jo’burg: “I could not change my feelings, so I...
WhatsApp
Facebook
Twitter
Email
Print 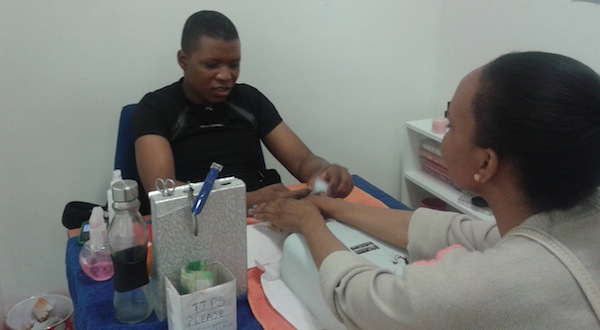 Musa Mthethwa (30) sits behind a table, surrounded by nail products. He spends his days as a nail technician at the bustling Carlton Centre, in the heart of the Johannesburg CBD. Mthethwa, who has been openly gay for 15 years, spoke withÂ PONTSHO PILANE about the daily negotiations he must perform in a society that still discriminates against gay people.Â

I am originally from eSikhawini, near Richards Bay. I am one of my motherâ€™s eight children. I have two brothers and five sisters.

When you are a young boy and you realise that you like boys instead of girls, like you are supposed to, it confuses you so much but I could not change my feelings, so I embraced them.

My first gay encounter was in 1999, when I was 15; I decided to tell one of my school mates that I had a crush on him. He was so shocked and he went to report me to the principal, I got suspended for a week. Upon my return, the principal asked me why I did that, and I came out to her and she was supportive from that day onwards.

I later decided to come out to my family because I could not pretend to be something I was not anymore. When I did, my motherâ€™s older sister chased me out of the house and I had to sleep outside, under the banana tree in our yard. The next day, I went to my other auntâ€™s house and told her everything. She accepted me for who I am and from that day onward I stayed with my aunt and cousins. They have always supported me in this journey. Until this day, we are still very close.

My mother has not accepted that I am gay. She always says “Ang’zalanga istabani mina.” (I didn’t give birth to a gay child.) All my siblings are supportive, they have defended me to people in our community.

But no amount of support prepares you for the harassment you will face as an openly gay person. Coming from eSkhawini, where many men hate us gays, I have had to run all of my life.

One night I was coming from a party and I met a group of men.Â They said â€œMasibulale lesâ€™stabani!â€ (Let us kill this gay!) I have never been so afraid in my life. I ran into the road and a taxi stopped. I pleaded with the taxi driver and he helped me. I donâ€™t know where I would be if he hadnâ€™t shown me such mercy.

These sort of incidents were common for me. It was hard but I got tired of running and I decided that I will fight and stand up for myself. So I started confronting these bullies and this often resulted in physical altercations.

I came to Johannesburg in 2009 and I can tell you now that gay people are more accepted here than back home, but it is not enough. People still shout â€œstabaneâ€ when I walk in town. Sometimes the harassment is so bad that I have feared for my life. But nobody can help you, not even the police.

I once went to the police station to complain about being harassed by someone. I wanted to get a restraining order against him but the police officers just laughed at me and didnâ€™t take me seriously. Where do we go when even the police canâ€™t help us?