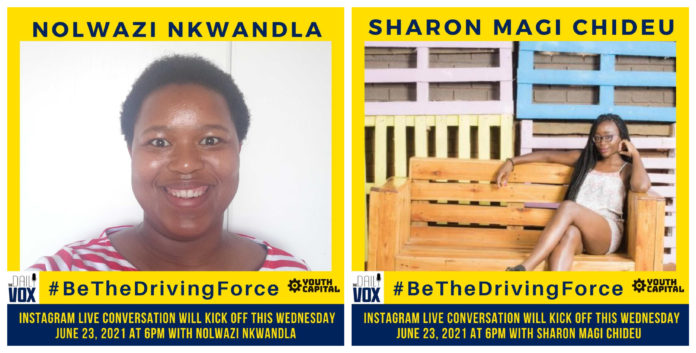 Over a month into the campaign, we’re excited to see how #BeTheDrivingForce is creating a space where we are learning about occupying spaces in a way that helps build a new narrative around young people as committed, keen and active.

This week we chatted to SA-based Nolwazi Nkwandla and Zimbabwe-based Sharon Maggie Chideu on how comedy offers a way to tackle socio-economic issues in a way that  is entertaining and engaging.

Taking something serious and turning into a joke offers a way to cope with it. Indirectly, comedy is a vehicle to promote free speech and therefore activism. Sharon says that  “my followers call me an activist”. She shared how once she had to stay in a safe house because the Zimbabwean government had threatened her and her team for criticising them. Nolwazi also added that comedy can also just be a way to share and normalise life stories.

If we look at the last year, comedy (even in the form of memes and GIFs) has helped us cope with our pandemic experience and de-stress from the global situation. Comedy, in general, helps us stay happier and takes our minds off things to keep us sane, even if it’s just for a couple of minutes. “I need to laugh everyday”, says The Daily Vox journalist Ling Shepherd who hosted the conversation with Siboniso Bophela from Open Dialogue.

What could we tackle with comedy right now? “The running joke is the lack of vaccination in our country is a laughing joke. We’re obviously worried but let’s laugh about it; because if we don’t, we could cry about it. The government always provides good material, and the Thembisa decuplets, of course ”, says Nolwazi. We can also poke fun at people who send tons of fake news WhatsApps (Bitcoin works!).

In her shows, Sharon highlights patriarchal issues in a male-dominated industry –  female comedians like Sharon are setting a new narrative in Africa with their content.

We also had Jameel Abdulla from the Tshisimani Centre for Activist Education. Jameel spoke about the Digital Tools & Tactics: Activist training for aspiring media officers they are launching. He encouraged digital activists who want to support their movements and organisations with basic media skills to sign up for the training. Check out the information here. (LINK)

#BeTheDrivingForce has shown us what young people are already doing! But now we need to transform that work into political influence. Youth Capital’s Comm Strategist Clotilde Angelucci and The Daily Vox’s journalist Fatima Moosa reflected on what we have learnt, a month into the #BeTheDrivingForce campaign for the Daily Maverick. While young people’s voices are still missing from the spaces where decisions on their development are made, there are still ways in which young people CAN incrementally build political influence.

Make sure to keep an eye out on our social media for the announcement of our next speakers. It’s going to be an exciting one.

The #BeTheDrivingForce series includes a WhatsApp group, where young people can pose questions that will be answered in Instagram Lives, every Wednesday from 6 to 7pm for the duration of the series. Join the Whatsapp group here: #BeTheDrivingForce whatsapp group There will also be a special pop-up newsletter for the duration of the campaign. Sign up for the newsletter here.