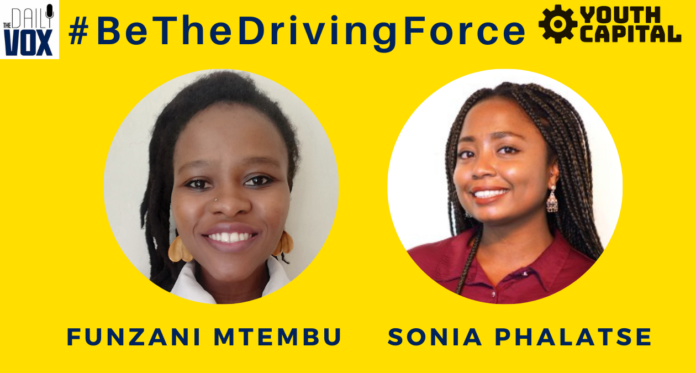 On August 18, the series hosted activists and economists Funzani Mtembu and Sonia Phalatse. In conversation with The Daily Vox’s Ling Shepherd and Youth Capital’s Lethiwe Nkosi, the pair discussed the current economic situation in South Africa and much more. The #BeTheDrivingForce Whatsapp received a great number of interesting questions in the days leading up to the live.

Funzani Mthembu is an economic analyst and an activist advocating for ethical economic practices. She was listed on Mail and Guardian’s Top 200 Young South Africans 2020. She is a member of the Fallist movement and was one of the ground activists who stood in the forefront of mobilising the Fees Must Fall movement at her university.

Sonia Phalatse is an economist and researcher at the Institute for Economic Justice (IEJ). She holds an undergraduate degree in Economics and Finance from the University of Cape Town and a Master’s degree in Economics from Wits University. Her current research focus is on the role of the developmental state and state-owned enterprises in South Africa, with a particular focus on Eskom.

Related article: #BeTheDrivingForce: Why we need the basic income grant

The highlight of the Instagram live was both Mthembu and Phalatse’s explanation of the term neoliberalism. They had mentioned the term during the live show and responded to a question about what the term means exactly. Neoliberalism is a political approach that favours free-market capitalism, deregulation, and reduction in government spending, they said. They also mentioned that is the neoliberal, capitalist system which is currently in place in South Africa and many other countries. It is anti-poor and most concerned with profit over people.

Both Mthembu and Phalatse noted the importance of structures needing to change in the National Treasury. They said there was a need for a diverse group of thinkers instead of recycling the same people without the department and having the same results.

They also noted that in general South African policies are not pro-women and the economy is not pro-women. For society to be pro-women economically, they said the most marginalised people i.e. Black people and the LGBTQ+ community need to be helped.

This will have a snowball effect in improving the economy and quality of life for all South Africans. Mthembu and Phalatse both agreed that the youth of South Africa needs to stay informed, and mobilise amongst each other to effect change.

Speaking to the Sunday Times days after his appointment, new finance minister Enoch Godongwana said he would rather use the basic income grant funds to help employ Black youth, rather than deliver another handout. This has caused much concern amongst supporters of the BIG.

Related article: Why an income guarantee would create a South Africa where everyone can thrive

To the question about women’s productivity and contribution to the economy, Mthembu expressed the concern that in an effort to acknowledge more of women’s contributions we should be weary of commodifying women’s social reproductivity, like the work they do in a domestic space because typically that’s what capitalism does, it turns means of income into commodity.

In terms of creating an economy that’s more responsive to women we need to look at the metrics we use to account for growth. Mthembu and Phalatse pointed to the idea that the GDP is not a telling indicator of economic growth and it does not really take into account women’s contribution.

The series includes a WhatsApp group, where young people can pose questions that will be answered in our social media sessions. Join the Whatsapp group here: #BeTheDrivingForce WhatsApp group.

On August 25, the #BeTheDrivingForce series will be hosting Twitter spaces to discuss youth clubs.