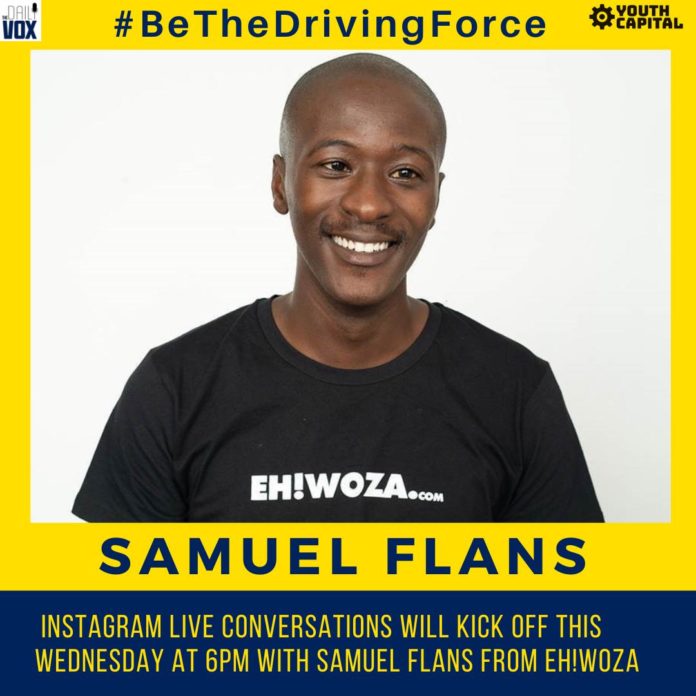 [ICYMI] The series will run between May 14 and July 9 and will explore the different challenges facing young people. These include climate change, menstruation rights, policy activism, infectious diseases, the cost of job-seeking, certification challenges, and the basic income grant, amongst others.

This past Wednesday, we hosted our first Instagram live with musician and filmmaker Samuel Flans mostly known as Innocent Muziq. In 2017 Innocent began his collaboration with Eh!woza, the first output being the production of one of the featured songs from the EP, Single Parent. Samuel has been working with Eh!woza since this initial project – first as a musician collaborator on Eh!woza’s MSF/Musos/DR-TB project, and then becoming a lead facilitator of Eh!woza’s workshops.

Samuel is currently being trained in all aspects of Eh!woza’s creative processes and recently begun to produce independent content and material, including documentaries about the impact COVID-19 and its containment measures, spread and social determinants on people in Khayelitsha, Cape Town.

During the live, Samuel took viewers through his journey and what he has learnt along the way about the importance of using one’s voice to make a difference. Samuel also explained the importance of young people using their voices within their communities. As he said so eloquently during the live: “Youth has power.”

“Even though our traditional ways of having marches are restricted, I think it’s important to not throw it under the bridge. We can still have those numbers that are allowed outside and have masks and sanitisers […] We can also have activists sharing their ideas online. We should always try to engage with people using social media,” said Samuel.

Next week, we turn our attention to the very important issue of climate change with two very special guest speakers. Make sure to tune into our social media for the announcement.

Also the series includes a WhatsApp group, where young people can pose questions that will be answered in Instagram Lives, every Wednesday from 6 to 7pm for the duration of the series. Join the Whatsapp group here: #BeTheDrivingForce whatsapp group

There will also be a special pop-up newsletter for the duration of the campaign. Sign up for the newsletter here.

The Daily Vox is an independent media organisation that aims to put the young citizen at the centre of news. Our reporters seek to find, curate and amplify the voices of young South Africans.

Youth Capital is a youth-led mobilisation campaign with an Action Plan to reduce youth unemployment.