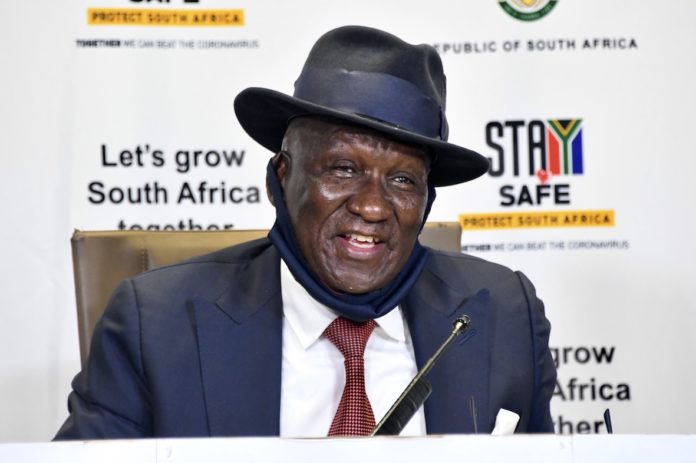 Minister of Police, General Bheki Cele opened a mobile police station in Kopanong/Skierlik, Mamelodi east of Pretoria. This was during his community outreach imbizo on Thursday.

Now residents will no longer walk distance. They will also save transport costs to visit Boschkop police station to report criminal charges. The minister engaged with the community about criminal activities taking place in the area. Cele appointed a temporary special task team for the area to help fight crime.

For a long time, residents have complained about many issues in the community. These include rape, gender-based violence,car hijacking, common assaults and murders. Since lockdown, they have also complained about the illegal tavern operating in the area and not adhering to lock down restrictions. There has also been the abuse of state resources by cops.

Minister Cele together with a team of South African Police Service (SAPS) leadership took to the streets. They engaged the community of the Kopanong\Skierlik informal settlement one-on-one addressing incidents of crime.

The crime prevention imbizo sought to provide the community with a platform to discuss and engage on crime in the communities. The imbizo also gives the residents of the area an opportunity to report policing related services delivery challenges. The SAPS outlined a policing plan to respond to the identified crime problems in the area.

Residents said they are so happy and excited to get their mobile police station. They can’t wait to use it and will finally save money from travelling long distances to other places to report cases.

“I’m so excited that finally I will no longer walk long distances and spend money on the transport necessary just to report a crime. I am overwhelmed by joy that I will just take a walk to lodge a criminal complaint in the nearest police station,” said Rethabile Khumalo.

“I will be able to report crime any time because I will no longer walk long distances unnecessarily. I’m happy that there is a mobile police station in the area and now I believe crime will decrease in the area,” said Mahlatse Nkadimeng.

Nkadimeng said the area is a crime hot spot. “It is worse during the night. Every time we call the police they don’t bother to come at all. The abnormal use of drugs,  high rate of unemployment and poverty in the area are the contributing factors to the crime wave.”

“I’m aware of crime in the area and that there are gangsters that are threatening ward councilors. I got a list of suspects and I’m coming for them,” said Cele, addressing the residents.

He said he’s been in the area several times and won’t allow the community to be intimidated by criminals. Cele said they won’t allow criminals to extort money from the business people. “We have a long list of cases in Boschkop police station and all these cases will be resolved. They will find a better way in solving these cases,” Cele said. Cele said he wants the community to elect the structures that will work together with the police. The structures elected by the community will work with the police to arrange a program of CPF.

“I have appointed a team of police to be in the area until I come back with a permanent task team that I will appoint to fight crime. All I want is peace in the area,” said Cele.