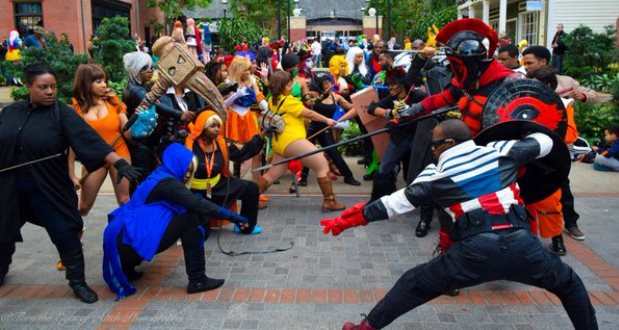 The hashtag #29DaysOfBlackCosplay, which didÂ the rounds throughoutÂ February celebrates the excellence of black cosplayers. For those of you who don’t know, cosplaying is the practice ofÂ dressing up as a character from an anime, TV show, comic book, movie, or some other mythical universe. DANA DA SILVA rounds up some of her favourites from Twitter.

The hashtag was originally started by Chaka Cumberbatch, 28, who intendedÂ it to unite, inspire and showcase black cosplayers of all sizes, ages and shapes.

Speaking to IGN she said, “This is about lifting each other up instead of waiting for anyone to do it for us. It’s about giving light toÂ blackÂ cosplayers of all ages, shapes, skill levels and sizes. It’s about making this community a little more welcoming than it was when we came into it. And most of all – it’s about positivity. Many (if not all) of the cosplayers taking part in the campaign this month have had negative experiences while cosplaying due to our race.”

When posting their cosplays online, black cosplayers generally receive racist comments. Some people think you need to look like a character right down to the height, weight and skin tone.

Writing in 2013, Cumberbatch said photos of her in full cosplay mode had captured the attention of many internet users, especially racists.

“After my pictures started making the rounds on deviantArt, tumblr and 4chan, it became pretty clear that my cosplay brings all the racists to the yard, and they’re likeâ€¦white cosplay is better than yours,” she said.

And so, the motivation behindÂ #29DaysOfBlackCosplay is clear.Â

The project was also created to tie in with black history month, which celebrates the many achievements and contributions of black people from Canada, the USAÂ and the United Kingdom.

Because #Superman & #WonderWoman should identify with everyone #29DaysOfBlackCosplay #cosplay pic.twitter.com/Dm5QcCn5Fy

7. Yuna and Tidus from Final Fantasy

9. Queen of the Damned

Akasha – Queen of the Damned by Princess Mentality

And the cutest for last…