Home Muslims “Black Muslims are getting tired of being considered less of a Muslim...
WhatsApp
Facebook
Twitter
Email
Print 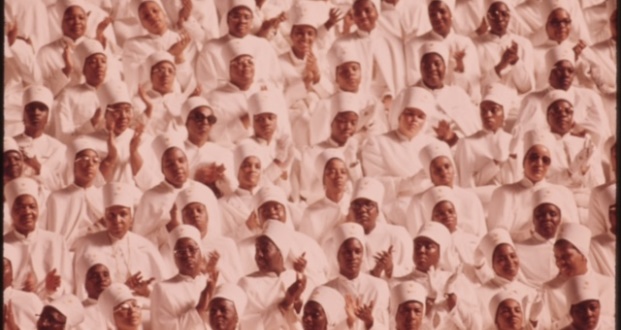 At the end of 2015, the hashtag #BlackInMSA went viral on social media, sparking a conversation around the experiences of black Muslims as they tried to interact within Muslim community spaces. Calling out the racialisation of Islam as – amongst other things – a religion of brown people, the hashtag also highlighted how the issues that black Muslims and black people more generally face are rarely championed by Â Muslim community groups that are primarily brown. Blogger bamanamuso, a black Muslim woman, broached these issues and discussed her experience as a black Muslim woman on her blog FarafinnaÂ .

As-salam â€˜alaykum [peace be upon you]. Yes, on top of being Black and a woman, I am Muslim. Couldnâ€™t get any better.

Most of my family and friends are Black African Muslims, so to me being Black and Muslim is the most common and normal thing in the world. When I went to the UK, however, I noticed that it wasnâ€™t the same for everybody. Many Muslims in Great Britain are of Arab or South-Asian descent, so-called Brown people or non-Black POC [people of colour]. Although we share common experiences due to White supremacy, they can perpetrate anti-Blackness and Afrophobia.

Being in England was an eye-opening experience and it was the first time in my life that I found myself in a big Muslim community. Before that I only shared my faith with my family and close friends.

At first, I was happy that so many Muslims were around me but very soon I realised that it wasnâ€™t that great. Although there were many Muslims of African descent, Muslim places were often dominated by Arabs and Desi (people of South Asian descent). It didnâ€™t strike me at first, because we were all together in the name of Islam, but little by little I started feeling not so connected with my brothers and sisters in religion.

This was the main reason why I didnâ€™t join my ISoc (Islamic Society) in the university I was in. Everything or the vast majority of what was organised was to raise awareness and help populations in Syria, Palestine and other Middle-East countries. Now, donâ€™t get me wrong, itâ€™s a wonderful thing to do because they need our help. What was disturbing in my view was the utter disregard towards Muslim countries in Africa.

Half of the continent practices Islam; many African Muslim countries face difficulties but no one seemed to care. When I realised that I understood that I didnâ€™t belong in there. The fact that I felt more connected, comfortable with and closer to other Blacks, even if we didnâ€™t share the same belief, than with non-Black Muslims is quite telling. Anti-Blackness and Afrophobia is present everywhere.

I did, however, go to a couple of events and lectures and the only time they talked of Africa was when speaking of witchcraft.

Personally, I havenâ€™t had any negative experience with Arab or Desi Muslims (because Iâ€™m mostly surrounded by Black Muslims of African descent) but I know people whoâ€™ve had. They were called slaves, Black women were called whores, some thought that Black people couldnâ€™t possibly be Muslims and others changed place in a mosque so as not to sit near a Black person.

Our contribution to Islam is often ignored and/or forgotten. I wonder how many people of Arab descent living in North Africa and in the Middle-East know about Mansa Musa for example. He is considered to be the richest person in history. During his famous pilgrimage to Mecca he stopped in Cairo and gave so much gold away that it took 12 years for Egypt to recover from inflation.

Once my cousin told me that she had read a tweet by a Muslim of Arab descent wishing a happy â€˜eid to all Muslims. She mentioned every single Muslim country (even tiny islands no one knows of) but didnâ€™t mention a single sub-Saharan African country. When asked why she said â€œI couldnâ€™t have written all of them, theyâ€™re in the three dotsâ€. Half of Africa reduced to this â€œâ€¦â€

Black Muslims are getting tired of being considered less of a Muslim than Brown people and to have our experiences and the intersectionality of being Black and Muslim silenced and ignored. Thanks to #BlackinMSA more people are sharing and getting to know what it means.

Having to constantly endure your Arab and Desi friends throwing the N-word around like candy, and having the â€˜sensitivityâ€™ to ask you whether you’re okay with it, and then hearing them throwing it around next door when you arenâ€™t there, ultimately defeating the purpose.

Being #BlackinMSA means that every Khutbah, every MSA night, every token Muslim fundraising group is constantly raising money to “help our brothers and sister in Syria, Palestine, (maybe Somalia or Sudan if weâ€™re lucky) Pakistan” and every other â€œMiddle Easternâ€ or Indopak country that is going through hardships or difficulty. As if other predominately Muslim countries like Sierra Leone, Nigeria, or Mali donâ€™t exist. Do they feel so distant from you, or have you decided that other areas in the world have a higher priority?

#BlackinMSA means having Billal, one of the most trusted companions of Muhammed [peace be upon him] and the first man to give the call to prayer as the token black in Islamic History, completely ignoring that he as well faced racism and discrimination. The companions of the prophet Muhammed [peace be upon him] referred [to Billal] as â€œyou son of a black womanâ€ and then hearing Muslims today pretending that there has never been a race problem within their community.

Edit: The Prophet Muhammed [peace be upon him] upon hearing this then said to â€˜Abu Dharr: â€œYou insult him based on his mother? There is still some trace of Jahiliyya (ignorance) left in you.â€

Being #BlackinMSA means hearing your friends and prominent Muslim organisations that you respect constantly hold struggles of blacks in America today in contempt, smugly and patronisingly telling African Americans to be more civil in their actions, not realizing that black people arenâ€™t in need of civics lessons from individuals who were only able to come to America as results of their struggles.

â€œâ€¦disturbed over the escalation of violence and rioting shortly after the funeral of Freddie Grayâ€¦â€
â€“ statement by ISNA in the wake of the Baltimore protests.

Being #BlackinMSA means constantly having to endure the neglection of your peopleâ€™s own contribution to Islamic History. Knowing that names such as Sundiata Keita, Usman Dan Fodio, Mansa Musa and great Islamic civilizations like the Mali Empire, the Songhai Empire and the Sokoto Caliphate mean nothing to the majority of Muslims.

Being #BlackinMSA means that this hashtag is disturbingly necessary.â€

Non-Black Muslims have the habit of silencing us and trivialising our struggles by quoting passages from the Qurâ€™an and the Sunnah.

Just like when White people say â€œyouâ€™re being divisive, weâ€™re all the sameâ€, they say â€œIslam is not racist, weâ€™re all Muslims and besides Bilalâ€¦â€. They are right, Islam isnâ€™t racist, but Arab and Desi Muslims can be and often are.

What non-Black Muslims fail to understand is that by quoting this hadith theyâ€™re actually silencing us. It shows how little credibility we have when dealing with anti-Blackness and Afrophobia. Anytime they say that no one is superior to another person based on skin-colour or nationality, theyâ€™re erasing and trivializing our reality and our experiences. They hide behind our religion and refuse to acknowledge whatâ€™s really taking place. We do live in world where being fair-skinned (White or Brown) is more preferable than being dark and being labelled â€œMuslimâ€ doesnâ€™t protect us.

Itâ€™s a constant reminder that we, Black people regardless of faith, have to suffer quietly so as not to offend either White people or non-Black POC. We have already to deal with White supremacy but when it comes to our interactions with Muslims we also have to cope with Arab/Desi supremacy.

How dare we want Muslim African countries to be part of those who need our help? How dare we openly and publicly say that Arabs are still enslaving us? We need to be quiet because what we say may be offensive and make them feel uncomfortable. Itâ€™s more outrageous to say that Lebanese people who hire Black African women sexually abuse them, beat them and burn their vaginas than the fact in itself.

Iâ€™ve been told to be patient and leave it to Allah. I interpret this as someone telling me â€œignore injustice, racism etcâ€¦ it will eventually go awayâ€. No, itâ€™s precisely because I practice Islam that I shed light on whatâ€™s wrong and do what I can to combat it.

However â€œunpleasantâ€ it may have been, Iâ€™m happy that I had the chance to see for myself what it means to be Black and Muslim outside of my family circle.

Itâ€™s time for us to open our eyes and face reality. Islam teaches us not to be racists, but weâ€™re people, weâ€™re not perfect and we make mistakes. Let us acknowledge those mistakes and get rid of Arab/Desi supremacy, tribalism, anti-blackness, nationalism, Afrophobia.

May we be able to follow the path and examples of our beloved prophet Muhammad [peace be upon him] and build one Ummah [loosely translated, ‘Islamic community’]