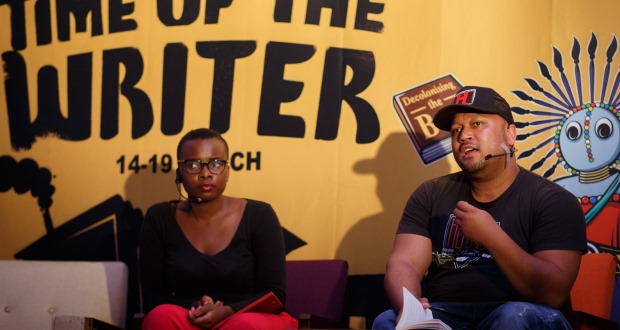 On Wednesday evening, writers Panashe Chigumadzi and Eusebius McKaiser headed a panel at the Time of the Writer festival entitled “Why Must a Black Writer Write About Blackness?” THE DAILY VOX TEAM rounded up some highlights from the conversation – and yes, point 1 and 2 are very similar because that’s how important it is.

1. Black people can write about whatever they want to write

Whether it’s love, race, politics, or death. Black writers don’t need to be censored anymore by publishers and markets. When people choose what they want to write, everything gets covered.

2. Blackness does not have to be the point of departure

Sometimes black writers are reluctant to write or speak about race – and that’s fine. Because they can write about whatever they want to. Eusebius’ next book is about death, illness, and the meaning of life. And it’s okay to write books without any white characters.

3. It’s not actually fun to write about racism

“this will be the last invite i accept to literary festivals to talk about racism,” @Eusebius. #TOW2016 #DecolonisingTheBook

4. Different forms of writing are important

Writers can write short stories, essays, novels… the list is endless. There is no single way to tell a story, and we shouldn’t confine writers to that. Each different method has its own unique function.

5. Non-fiction is important, and writing it demands skill

As with any form of writing, you don’t wake up and become a natural at it. Practice makes perfect. And non-fiction is very raw, so sometimes it can be harder to write.

6. Reimagination is important and a necessary part of decolonising literature

As a black person, your race will always follow you and confront you in the spaces you’re in. But for black writers, your writing is a way to write about black people outside of just their proximity to whiteness – something very powerful.

@panashechig: I have tended to deal with race in my nonfiction than in my fiction… In my fiction reimagination is important #TOW2016

7. Literary black tax is a thing

The pressure of the few black writers who do make it into the mainstream is a misplaced pressure. They’re fighting a system that doesn’t want them there. An expansion of the number of black voices that should be heard is very necessary.