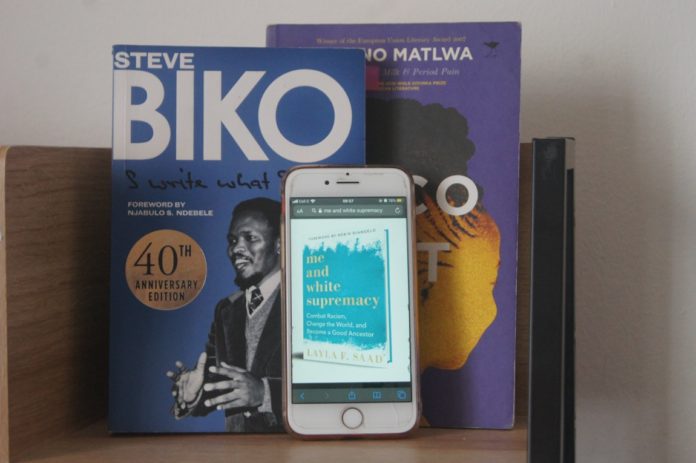 The wave of anger in reaction to the murder of George Floyd that sparked a new wave of #BlackLivesMatter protests in the United States and the world will not ebb. It has led to a flow of interest in race and race relations. Here’s a list of local and international titles, fiction and nonfiction, which we recommend for those who want to learn about systemic racism, white privilege and their legacies on Black people the world over.

Kopano Matlwa’s Coconut, released in 2018, won her the Wole Soyinka African Literary Prize. It tells of two young black women, Ofilwe and Fikile, with vastly different lives which both reveal the burden of apartheid on its “born free” generation. While Ofilwe grew up in the suburbs and is trying to assimilate into whiteness, Fikile grew up in the township and is looking to escape to the glamour of Johannesburg. Coconut deals with identity, poverty, economic privilege, systemic racism, and the psychological scars of apartheid. This book is for anyone who wants to better understand the South African landscape.

Twenty-four young black contributors write 28 pieces in Writing What We Like. The collection, edited by Yoliswa Qunta, is both serious and lighthearted. While many stories are written by ordinary young South Africans, the collection also features some prominent South African voices like Simphiwe Dana, Siv Ngesi and Loyiso Gola as well. The volume showcases important and astute slices of contemporary life in South Africa. Topics addressed in the collection range from whitesplaining to hip hop and Rhodes Must Fall. This is an important read that voices Black youth in South Africa.

No book list about race will be complete without Steve Biko’s I Write What I Like. Biko is one of the most important South African anti-apartheid activists. He was murdered on 12th September 1977 in his prison cell at age 31. But his ideas, captured in this collection of his work, are alive in South African politics. This book holds Biko’s work from 1969, as president of the South African Student Organisation, to 1972, when he was barred from publishing. In it, Biko grapples with the foundations of Black consciousness, Bantustans, African culture, and Western involvement in apartheid.

Here is a collection of stories that delves into the everyday lives of Black South Africans. ‘Black tax’, which refers to the income Black professionals contribute to support their families, is a daily reality for many Black South Africans. The anthology, edited by Niq Mhlongo, features a range of personal stories. While some believe supporting family is part of African culture, others speak of the financial pressure it places on Black students and professionals who then struggle to grow their own wealth. The stories look at the historical roots of Black tax, Black family and the Black middle class.

On the Other Side of Freedom by DeRay Mckesson

As a key activist within the Black Lives Matter organisation, DeRay Mckesson writes about the movement from the frontlines. The book reads like a memoir as he speaks honestly about his experiences as he transitioned from a teacher to an activist and political organiser. It also reads like a BLM manifesto as it delves into activism, resistance, and justice. It sets out America’s history and the oppression that persists, and the impact of racial injustice. In a bid to understand and dismantle structures of oppression, this book is a valuable read.

In journalist Emma Dabiri’s essay collection, she looks at how black hair has been appropriated and stigmatised throughout history. Exploring race, body politics, pop culture, and her personal journey to loving her hair, Dabiri shows how Black hair has historically been used as an avenue for discrimination. She looks at pre-colonial Africa, the Harlem Renaissance and the contemporary Natural Hair Movement. No stone is left unturned from women’s solidarity to the criminalisation of dreadlocks, and Kim Kardashian’s foray with braids. Dabiri shows that it’s not just hair: but can be viewed as an allegory for Black oppression and liberation.

The Sellout by Paul Beatty

An Essential Booker prize winner, Beatty’s satirical novel takes place in and around Los Angeles. It’s about a protagonist who grows artisanal marijuana and watermelons and attempts to reintroduce segregation and keep a slave. His attempt leads to a Supreme Court case, Me Vs. The United States of America. Using pure comedic genius, Beatty challenges the United States Constitution, the civil rights movement, and the father-son relationship. It pokes holes in the idea of a “post-racial” America in the best way possible.

An American Marriage by Tayari Jones

Tayari Jones’ moving story is centred around newlyweds Celestial and Roy: the embodiment of the American Dream and the New South. But just as they settle into their lives together, they are shaken by an unimaginable disruption. Roy is arrested and sentenced to 12 years for a crime Celestial knows he didn’t commit. The race-based injustice in the prison system in America is widely written about. But Jones’ book looks at the way this plays out in a tale of love, marriage and loyalty. The book is an Essential Women’s Prize for Fiction winner, and it’s easy to see why.

Edited by Margaret Busby, this anthology merges the work of over 200 women writers of African descent. Showcasing a wealth of genres, you can read poetry, oral histories, diary entries, speeches and more. It features writers’ voices from across the diaspora, celebrating a unifying African heritage, Blackness and sisterhood. The anthology also highlights common obstacles that Black women writers still face as they negotiate intersecting identities of race, gender and class. Whether you read this cover to cover or keep it as a resource to dip into as you need, this is a must-read.

Layla Saad’s workbook on privilege and institutional racism initially started off as a month-long Instagram challenge in 2018. Thousands globally took part in her #meandwhitesupremacy challenge, examining and owning the ways in which they are complicit in upholding white supremacy. Almost 100 000 people downloaded her Me and White Supremacy Workbook in just six months. Now, that guide is a published book. It’s an important resource for white people to understand their privilege and participation in white supremacy; to stop inflicting damage on Black people and people of color, and help other white people do better too.

Fostering empathy and understanding is a means to disrupt entrenched racism and white supremacy. Reading is one of the best ways to reimagine entrenched systems and look to cultivating revolution.