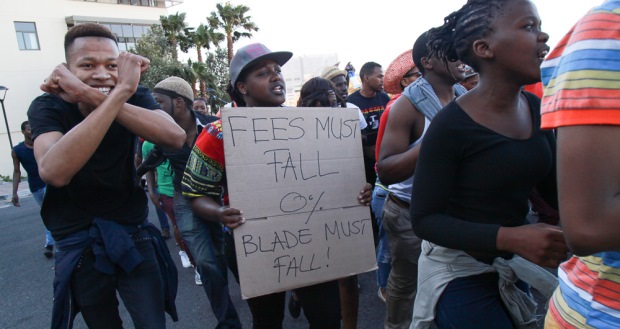 University fees are set to rise by 8% for the 2017 academic year but a proposed new funding model from the department of higher education could see 70% of undergraduate students exempted from this.

Nzimande, who was speaking at a special briefing on governmentâ€™s recommendations for the 2017 fee increases in Pretoria on Monday, described the intervention as â€œenormousâ€.

He said that, while the best approach would be to allow to universities to set fees to the level they require, government was recommending a fee adjustment of not more than 8%.

â€œWe have reached an agreement with the vice chancellors and the university council chairpersons that, given the sensitivity of this matter, they would all be committed to being guided centrally,â€ he said.

However, this would not affect all students. Students on the state sponsored student loan scheme, NSFAS, as well as â€œthe missing middleâ€ will have no fee increments for 2017, which will be funded by government, and therefore taxpayers.

The missing middle refers to students who do not qualify for NSFAS but whose parents still cannot afford to pay fees. According to Nzimande, this would cover any students from families with an income of less than R600 000 a year.

The department estimates that the programme will cost government around R2,56-billion.

For those who can pay, 8%He reiterated that government policy was to support students from poor backgrounds, and more permanent solutions to the funding crisis are in development.

He warned against those who would use the â€œlegitimate concerns of students for their own narrow political endsâ€ and said students should not be mobilised for those whose parents who can afford to pay feesâ€.

â€œThose who can afford to pay, must pay,â€ he said.

He added that South African institutions of higher learning are facing â€serious challenges in terms of fundingâ€.

Nzimande ended his address noting that universities are expected to pay their staff, both permanent and contracted, a fair living wage, a seeming reference to the #OutsourcingMustFall campaign.

He’s shifting the onus onto universities who don’t have the means to change resource acquisition. Complete non-response #Fees2017

The announcement has been met with skepticism from students.

Simone Cupido, a student activist at Stellenbosch University, accused Nzimande of passing the buck back to universities while actually supporting a fee increase.

â€œI think people are in shock that it went this way and we definitely know that our university will increase [fees] by 8%,â€ Cupido said. â€œThe consensus is however, that we would need to see what the universitiesâ€™ reaction is and our demands still stand.â€

This is a developing story and will be updated as events occur.