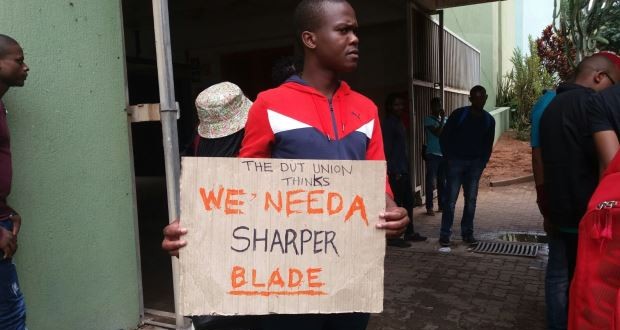 There is a meeting scheduled between Minister of Higher Education Blade Nzimande and university vice chancellors for Thursday. A group of university academics and activists have released a statement reminding us that we need to be wary of what will likely be discussed in the meeting.

We should be all concerned about the anticipated meeting between the Minister of Higher Education and the universities to discuss the Council on Higher Education’s (CHE’s) advice (following the work of its task team on this issue) about a regulatory framework affecting future fee increases, in response to the minister’s request to it. Its advice is likely to be based on economic models examining the impact of differing levels of fee increases for students taking into account CPI in particular. This advice is particularly directed at fees for 2017.

This CHE Task Team’s advice will be given in the context of the Presidential Commission of Inquiry and other initiatives which will ostensibly impact on the question of the costs of higher education and student fees in particular beyond 2017. In other words, at this stage, the Task Team’s work is not directed at the question of the chronic underfunding of higher education but is limited to the fees for next year.

What should we make of this?

1. The Task Team’s work “ even if it might refer to it in passing “ pays little attention to the massive opposition to fee payment (let alone increases) by students nationally. It is as though 2015 never happened.

2. It should be understood that the CHE Task Team’s approach was based almost entirely on economic modelling to provide advice about student fees for 2017.

3. Its recommendations are therefore not about the fundamental question of the progressive realisation of the rights to education – i.e. not about issues of social justice and what is required by the Constitution – but is about what would be the proper level of fees for 2017. It paid no attention to the larger questions that are implicated in such an economic model. Nor, as far we can see, did it invite any representation about the issues which it deliberated on or take account of other approaches to the question of fees outside the framework of economic modelling used by it.

4. There is no barrier to the CHE “ independently of the minister’s request “ formulating advice to the minister which goes beyond the limits of the economic approach it has chosen. It seems to have chosen not to do so, despite the fact that it has the legislative power to do so.

5. Universities represented by their vice chancellors are likely to be concerned mainly with the question of the fees that they should levy in supporting the process of learning and teaching and the other activities in which universities are engaged. Their arguments are likely to be constructed around questions of the viability of institutions “ especially in the short term and especially as a consequence of the fees increase decision of 2016. They will be concerned to show that the situation for them has become even more parlous relative to 2015 because of the increasing costs for staffing, infrastructure, equipment, libraries and other expenditures necessary for the provision of quality education. Regrettably, their approach too is unlikely to focus on the rights to education and the question of fee-free education in particular.

6. There is absolutely no doubt that the higher education system as a whole is chronically underfunded. The elements of that underfunding range from: the ratio of students to lecturers at this time relative to when the student population was much smaller, to the level of per student subsidy through the NSFAS system, to the funding for what has been termed the missing middle, to infrastructure and maintenance costs, libraries and other necessary infrastructure related to the academic enterprise. And all of this does not take into account the question of the â€œfull-cost of study which is associated with all academic costs, transport, accommodation and other costs associated with student life “ matters which were in fact raised in the earlier enquiry chaired by Professor Swartz.

7. The most troublesome issue is that the discussion with the minister could be limited to the single issue of 2017 fees, based on the work of the Task Team of the CHE. And therefore it is not clear how this discussion will deal with the question of the reaction of students to the levying of fees – an issue which has been fundamental to their struggles and concerns over fee-free education.

8. As we know, these struggles are based as we know on at least the following considerations:
a. The unfulfilled political promise of â€œfree education for all;
b. The increasing debt-burden being placed on students in general and students from working class and rural backgrounds in particular in the context of rampant unemployment and its effects on the most vulnerable communities from which they come;
c. The denial of a constitutional imperative which speaks about the progressive realisation of the right to education – including higher education.

What is the best way forward?

It is clear that in the next few days a very important event is likely to take place, affecting the fate of students. It is necessary to make this issue more public open and the subject of democratic deliberation, not only by students but by the public at large. Such a discussion can be based on the following grounds:

1. That any discussion about the issue of funding for next year must in the first place be premised on a discussion about how free education is to be achieved, its time frames, milestones and implementation. That is and has to be the only starting point of the discussion.

2. Once that is agreed to in principle, then discussions about the specific mechanisms for funding the university system can follow since there is no question that although universities are grossly underfunded, that is no reason to assume that such funding must be derived from students.

3. The present discussions are punitive from the point of view of students since it is only about increasing the burden on them and not about what is socially just. The idea of tying students to bankers and loan agencies contradicts an approach based on social justice. In fact, it simply increases the power of the most powerful institutions in society “ bankers and financiers whose sole purpose is profit making for themselves.

4. There is no question that any discussion about university funding for next year or for any succeeding years has to be premised on a starting point which takes its cue, inter alia, for the Constitution and from a commitment to social justice. It can be shown from a legal point of view that the very reverse of what is promised in the Constitution has actually taken place, that is, that students have been required to carry an increasing burden of funding their own education, a practice which flies in the face of any reading of the idea of progressive realisation.

5. Most importantly “ who should be involved in these discussions is a fundamental issue. Students must of course – with parents – be involved in the discussion about the process of meeting the promise of free education for all and how this will be an achieved. In other words, who must be in the discussion to design and frame a response to the question of a roadmap to free education is absolutely critical. In this regard, such a process cannot be left to a group of economic modellers since they do not have the conceptual tools to do what is required from the perspective of social justice and equality. The mandate of any group identified for this purpose has to be absolutely clear and democratically constituted.