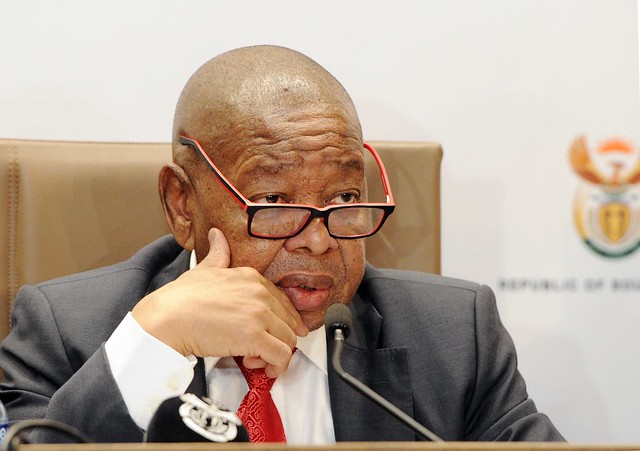 The last time he was the higher education (DHET) minister he said “students must fall” and dismissed the student movement. Now Dr. Blade Nzimande is back as the minister of the newly combined higher education, science, and technology.

During his cabinet announcement, President Cyril Ramaphosa announced the combining of the DHET and department of science and technology. Nzimande – now in charge of the portfolio – is no stranger to Higher Education.

He was in charge of the DHET between 2009 to 2017. He takes over from Naledi Pandor who was the last DHET minister from the fifth administration. Jacob Zuma removed Nzimande as higher education minister in 2017 during a cabinet reshuffle. (Supposedly because of the fee commission report.) Hlengiwe Mkhize replaced him back then.

His First Tenure in Higher Education

Ahmed Bawa, CEO of Universities South Africa (Usaf) said Nzimade has a great legacy from his time at the DHET.

“Minister Nzimande made a huge influence on post-school higher education training. Constituting a single system of the universities and TVET colleges is one of his legacies,” he said.

Bawa says Usaf worked well with Nzimande but this time around they are hoping for more policy stability. Many don’t agree with Nzimande’s reappointment. Bawa says the minister pushed a hardline against FMF demands but it wasn’t really from the DHET.

“He pushed a very hard line that further expansion of the financial aid scheme was not viable. That wasn’t coming from his office. That was from the office of the treasury,” he said.

Political analyst Tasneem Essop takes an opposite line to Bawa. She says Nziamnde was likely chosen as minister as a sign the president is taking the ruling party’s alliance partners seriously.

As for his appointment she says the experience of Nzimande during the student protests taints his second tenure with higher education.

“But the thing is the experiences of the student movement and the engagement there is of concern to me,” she said.

In 2016, Nzimande accused student leaders of duplicity during a meeting between students, government, and university management.

“What I announced the other Monday, the R600,000, the 8% and so on we agreed with you as the SAUS (the South African Union of Students). Yet today you come here and say what you are saying,” he said.

At the time Nzimande also said student leaders had agreed on the amended fees increase for the 2015 FMF protests.

“I want people to know that last year you agreed on a maximum 6% increase last year,” he said. “Then, we were all supposed to go out and convince our constituencies to accept that. The moment we left that meeting you never did that. You left me on my own, thrown under the bus.”

There were many negative reactions from students to the announcement that Nzimande would be in charge of the department once more.

Leigh-Ann Naidoo, educationalist at UCT’s school of education say there are many concerns around Nzimande’s appointment including the reports showing how badly the FMF student protests were managed.

“To me it seems like a slap in the face that you reappointed the same person who didn’t manage the situation very well. He said students must fall and was quite dismissive of the student movement throughout the time until his back was against the wall,” said Naidoo.

She adds she worries that there hasn’t been any accountability with regards to the bad way the student movement and protests were managed.

One of the last acts before Naledi Pandor’s term ended was the appointment of a ministerial task team to advise on matters relating to sexual harassment and gender-based violence (GBV) in public universities. Essop says that commentators have said this was Pandor’s parting gift to higher education.

The task team was formed following an open letter written by a group of academics, highlighting issues of GBV, including sexual harassment.

Lisa Vetten, Wits-based gender researcher and member of the task team told The Daily Vox in an interview prior to the cabinet announcement that she hoped Pandor was retained as the minister.

“If it’s someone else it might set the whole process back. Politicians have an unfortunate habit of only wanting to do their [own] things. They don’t like to seen advancing their predecessors’ work,” she said.

However, both Essop and Bawa said that they doubt Nzimande will be changing the policies of his predecessor.

Bawa said he thinks the minister will continue with the commitment to attend to issues of gender-based violence: “I don’t see any chance of those being reversed.”

“I don’t think he would change that and I certainly hope he wouldn’t,” Essop said about the task team.

Naidoo said in Pandor the higher education sector has a minister who responded to what people were telling her.

“Whether Blade is going to continue to do so is something we are going to have to wait and see,” said Naidoo.

Merging of the departments

Whether it’s a good or bad decision that Nzimande has been put in charge, both Bawa and Essop agree that the merging of the departments is a good choice.

Essop says it is a good move from the president to have the portfolios fall under a single department. “It flows in terms of how our cabinet and higher education operates and the key concerns within that portfolio. I think it’s a good thing and I think a lot of the other merges and portfolios were positive and make sense,” she said.

Ramaphosa’s entire cabinet have the nation’s expectations upon them. Many people are eagerly waiting to see how the ministers attempt to tackle and changes things in government services to people.

Bawa says Pandor did a fantastic job of addressing a whole range of issues while she was minister “so there is a very good platform to build forward.” He says while there are many questions and challenges they shouldn’t be insurmountable to Nzimande.

As whether he is up to the job, Essop says he is the minister appointed so the president thinks he is able to handle it. She says none of the portfolios are unmanageable and while some ministers might fail, there is a hope they won’t.

“We can only go on his record historically,” said Essop.