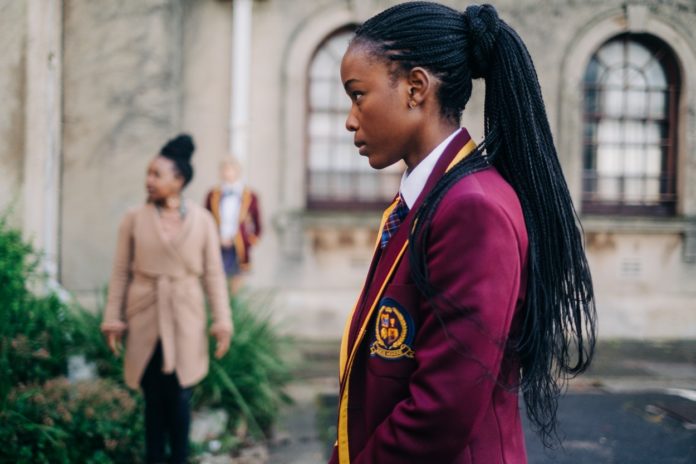 Following its major local and international success, Netflix’s Blood & Water is back for season two. The Netflix original show which premiered in 2020 is going to be on the streaming platform from September 24. After the cliffhanger ending of season one, fans of the show are going to be in for an entertaining time.

If you haven’t watched the first season, be warned there are spoilers ahead. On the other hand, if you haven’t watched the first season, where have you been? The show follows Puleng (Ama Qamata) on a search for her sister who was abducted 17 years ago. At a party, she sees Fikile “Fiks” Bhele (Khosi Ngema) and thinks Fiks could be her sister. Puleng ends up transferring to the elite Parkhurst High where she gets caught up in all secrets and lies of the rich and famous. The season ended with Puleng revealing her investigation to Fiks. Puleng’s father is also implicated in the abduction and we found out that there are much bigger role-players involved. If viewers thought the first season was dramatic, the second season is even more exciting.

Season two brings all the familiar faces back. KB (Thabang Molaba), Wade (Dillon Windvogel), Wendy (Natasha Thahane), Zama (Cindy Mahlangu), Chris (Arno Greeff), Tahira (Mekaila Mathys) and Reece (Greteli Fincham). There are also some new exciting characters in the mix with the introduction of Sam (Leroy Siyafa), Pauline (Katishcka Chanderal) and Zayd (Alzavia Abrahams). But one of the most important additions to season two has to be the new school therapist Janet Nkosana (Zikhona Sodlaka). Expect a lot from every scene she is in. She has secrets no one would ever guess the friendly, pregnant therapist has.

Sodlaka, Ngema and Fincham truly give the standout performances for this season.

What to expect from season two

There’s a line from Wade in one of the initial episodes which sums up a lot that happens in the season. “Are you jas?” he asks Puleng during one of their scenes together. It’s going to be interesting seeing international audiences try to understand what that means.

There are times when viewers are definitely going to be echoing those words. While Puleng is justified in trying to find out the truth about her family’s secrets, some of her decisions go a little too far. She also burns way too many bridges in this season through her actions. At times, Puleng doesn’t seem to care about her friends and family as she tries to uncover the truth. Also Wade should have been asking himself that at many times in the season.

Something that makes season two stand out is the focus on the secondary characters. The first season did give some screen time to Wendy, Tahira, Chris and Reece. But in the second season, we get to see a lot more of their family backgrounds and histories. Some interesting dynamics also emerge between the secondary characters. It makes for a break from the bigger story. During those times when Puleng was being a little frustrating, it was nice to be immersed in the other story lines going on. There is also some huge character development for Wendy and Chris at the end of the season which was refreshing to see.

Well we’ve already spoken about Puleng and some of her questionable actions during the season. But her parents might just win the prize for being even more questionable. They are so out of it that they don’t even seem to understand what is happening with Puleng. They play off her behaviour as being rebellious without understanding how their actions are affecting their children. But then again, that’s a central theme among all the parents and adults in the show.  Many of the adults either try to impose their ideas onto their children or treat them like they don’t know anything. In particular Reece’s story line this season was heartbreaking and concerning.

The change in camera work and cinematography for this season was interesting. Some of the shots are just too dramatic leaving nothing to the imagination. But perhaps as the show has gained international attention, there was a slight attempt to rely on Hollywood style editing. There was a lot of intense music for the background and intense staring from the characters.

But besides that the soundtrack was on point. It was filled with loads of songs from hip hop, amapiano and gqom artists. There’s also a special musical appearance in the final episodes that’s probably going to be well received by viewers.

The Girl At St Agnes, And The Dark Side Of SA’s Private Schools

The politics of the show

Blood & Water is not a political show. It’s a teen drama show which gives viewers Gossip Girl, Teen Wolf and Riverdale vibes. There’s the excess of substance abuse and teen angst. Teens solving mysteries on their own. Sometimes you would even forget the show is taking place in South Africa.

But it is a show set in South Africa and more importantly in Cape Town. There is just no way to escape politics. There’s corruption from school teachers to the parents to the prison officials. Then there’s the classism where Puleng and Wade think a man in the informal settlement is out to rob them but all he wants to do is return something they dropped. Bad things happening to whistle-blowers. There’s the overarching theme of human trafficking which is a big issue in South Africa.

We know that the criminals and looters in South Africa aren’t the people on the streets. It’s sometimes the people wearing the fancy suits and living in the swanky beach-side houses. Blood & Water makes that point quite well, we must say. The weaving together of current systemic issues with the plot line was done quite well.

The ending is probably going to leave viewers with more questions than answers. There are points when the show dragged throughout the season with the final minutes of the season being action-packed. We can only hope season three gets approved otherwise the ending is going to be unsatisfactory.

Many of the critiques of season one mentioned that the show doesn’t have a South African “feel”. Basically reviews said it felt like a more diverse version of the many Hollywood teen shows. There is no denying that. There is also no denying the fact that amplifying the privileged lives of teenagers living in Cape Town in a country with such high rates of inequality and unemployment is problematic.

But South Africa and South Africans are complex so we can love the representation and still call out the flaws.

Blood & Water season two will be streaming on Netflix from September 24.