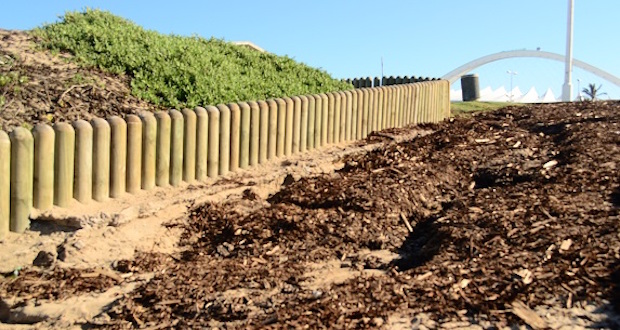 Heavy rains in Durban last week washed piles of garbage off the streets â€“ good for the city, not so good for Blue Lagoon Beach, where it all ended up. LIZEKA MADUNA spoke to Durbanites to find out how they feel about the trash piledÂ up on the beach. Sabelo Mthembu, 32, beach guard, Umlazi
I have spent years on this beach but I have never seen such dirt before. People often come to the beach during weekends and litter but it doesnâ€™t compare to what I have seen during the past few days. Having litter piling up the beach isnâ€™t good at all because Blue Lagoon is mostly occupied by tourists and having to see such dirt portrays a bad image about our city. Itâ€™s better today since the municipality workers have cleaned. People need to learn not to litter at all because the trash doesnâ€™t only end up on the streets but when rains – it gets washed off to the shore. As a guard I normally discipline people when I see them littering and make them pick up after themselves; itâ€™s not easy but itâ€™s part of my job. Ila Maegdefrau, 20, tourist, Germany
I have been to Durban five years back but I have never seen such dirt on the beach. It is understandable that the trash might have been washed off from the streets but that alone says something about the people of the city. Blue Lagoon beach is beautiful and peaceful, people just need to learn to be responsible enough and dispose their trash on the legal dumping sites and recycle. It is really disturbing to walk on the beach and find empty bottles of alcohol and plastic containers. Bradley Hendricks, 36, driver, Newlands
The trash was basically washed off from the Umgeni River. People find it easier to dispose of their trash in the rivers than to send it to the municipal dump sites. If people had recycling bins at their homes it would be a lot better and it would create jobs because more people would be hired to collect those recycling bins. I recycle my own trash so that it wonâ€™t cause any inconvenience for other people. Walking along a shoreline and finding trash piling up is really disturbing. If a person is caught littering, they should be made to pick up that litter and dispose of it properly. Namhla Sitwayi, 22, student, Overport
The litter situation has us all concerned because most people love the beach. We havenâ€™t been to the beach for a few days [because] of rain and then we come here only to find litter all over; itâ€™s rather disturbing. Perhaps the municipality could put up signs [saying] that whoever litters is being watched over by a surveillance camera; that might help scare people off and teach them to be responsible. Those who litter on the streets should be disciplined and making them to pick up all the litter could be the best way to teach them never to litter. There are rubbish bins and recycling bins all over the streets but people [donâ€™t] make good use of them. We want a clean city with clean beaches. Nathi Fono, 23, student, Overport
Now that we are faced with this situation, there isnâ€™t much that we can do about it. The least we could do is to help clean it up instead of pointing fingers. Some of us know that garbage needs to be disposed of properly and I do that; other people just find it easy to throw rubbish anywhere that is convenient for them. We need to teach ourselves to clean after ourselves because no one will do it for us. If I see someone littering I normally ask them to pick it up and throw it in the trash bin – I do in a polite manner course.