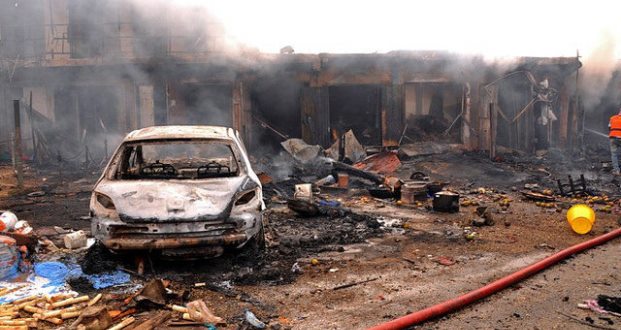 With news that one of the over 200 kidnapped Chibok girls was found this week, with a four-month-old baby, the horrors of what Boko Haram is capable of are back in the news. Itâ€™s not just Nigeria that needs to fight this battle against one of the deadliest extremist armed groups in the world. It affects all of us. MBALI PHALA explains why.

The humanitarian/refugee crisis
Hundreds of thousands have fled the fighting between government forces and armed groups in the northeast of Nigeria. This has caused large waves of displacement, affecting more than half a million civilians. Many have sought safety in neighbouring countries, Cameroon, Chad and Niger. However, the United Nations reported that the violence had also spilled over into those countries. The UN refugee agency estimates that there are more than 100,000 Nigerian refugees in Niger and 66,000 in Cameroon. The humanitarian crisis resulting from this conflict has shown no sign of reduction. Refugee camps in Cameroon continue to experience a steady influx of displaced civilians from both Nigeria and Cameroon as soldiers extend their raids against Boko Haram. Hundreds come into these camps monthly, and babies are even born in these camps.

Aligned to groups outside Nigeria
In March 2015, it was reported that Boko Haram leader Abubakar Shekau pledged Boko Haramâ€™s allegiance to the Middle-East based militant group Islamic State (IS). The group has since changed its name to WilÄyat Gharb IfrÄ«qÄ«yyah, translated as â€œWest Africa Provinceâ€ (ISWAP). It is still unclear how the fundamental dynamics of ISWAP have been altered since joining IS, beyond the name change. Prior to its pledge to IS, Boko Haram was allegedly cooperating with other regional criminal and terrorist networks operating in the Sahel and North Africa. Classifying itself as part of the Islamic State may provide recruitment and fundraising opportunities, but Boko Haram’s area of operations remains geographically removed from Syria and Iraq. Reported links between Boko Haram and Islamist militants in North Africa, including other IS “affiliates” in Libya, may be of more immediate concern. Some reports suggest that Boko Haram militants have been sighted in with IS factions in Libya.

Deaths outside Nigeria
According to the 2015 Global Terrorism Index, Boko Haram was responsible for the deaths of over 6,644 people in Nigeria and Cameroon in 2014 alone. Lauren Ploch Blanchard, specialist in African affairs, reported that Cameroon has been subject to the largest number of suicide bombings and guerrilla-style attacks. Cameroonâ€™s military response to Boko Haram has also drawn criticism from human rights groups for allegedly torturing and executing Boko Haram suspects. â€œIn November, the army forcibly returned more than 17,000 Nigerian refugees to Nigeria; and in December, Nigerian villagers accused Cameroonian army units of killing more than 150 residents in one incident and more than 70 in another attack weeks laterâ€ stated the report.

The international community has been asked to intervene
In a report by Human Rights Watch, the organisation suggests international communities, to support transparent investigations and prosecution of perpetrators of human rights violations by Boko Haram, government security forces and pro-government militias. The report also recommends that the International Criminal Court continue to press Nigeria, consistent with its obligations under the Rome Statute and the principle of complementarity, to ensure that individuals implicated in serious crimes committed in violation of international law, including attacks on educational institutions, are investigated and prosecuted according to international fair trial standards.

Overall, an entire generation of children in the northeast is being robbed of their right to education, a vital ingredient for their future and for the development of the northeast region. Without urgent action to address the lack of access to education occasioned by the Boko Haram attacks, these children will become locked in continuous cycles of underachievement and poverty.