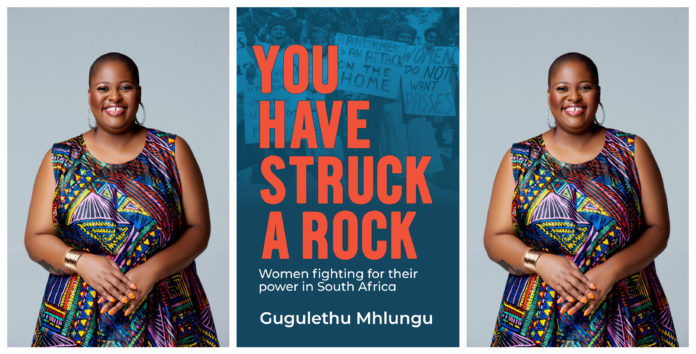 “You Have Struck a Rock“ by writer and commentator, Gugulethu Mhlungu looks at how history has shaped the conditions women face today. The book expands the narrative of gender issues by celebrating the ways women have worked tirelessly for equality. Here is an extract from the book.

Although it seems a given that a federation of South African women would be broad based, this was a concept that defied the political environment as the National Party (NP) intensified its gutting of human rights along racial, income, geographic and ethno-linguistic lines. The federation, although it pledged its support to all efforts to end apartheid, was very deliberate in highlighting the particular challenges that women faced. The preamble to the charter stated:

We, the women of South Africa, wives and mothers, working women and housewives, African, Indians, European and Coloured, hereby declare our aim of striving for the removal of all laws, regulations, conventions and customs that discriminate against us as women, and that deprive us in any way of our inherent right to the advantages, responsibilities and opportunities that society offers to any one section of the population.

This inclusiveness is reiterated in a Fedsaw commemorative pamphlet written by Hilda Bernstein, a founding member of the federation: ‘One strong concept – a basic idea – underlies the history of the Federation of South African Women: unity . . . It was founded on the principle of a national women’s organisation that would be open to women of all races, and of any political, religious or other faith.’ This mattered, especially for Black women, who, according to racist and sexist ordering of the time, were relegated to the lowest rung of society. Pass laws had applied to Black men since 1952 but, from September 1955, they were extended to include Black women – something that would have a devastating impact on those wanting to live and work in the cities. The charter was clear that women’s experiences of race, class, gender and poverty and violence were directly linked to the socio-economic structure of the day, noting that the evils of apartheid had impacted women, especially poor Black women, because ‘the society in which we live is divided into poor and rich, into non-European and European. They exist because there are privileges for the few, discrimination and harsh treatment for the many.’

The federation did what many of the movements of the time were failing to do, which is to connect the material conditions and struggles of women with the broader struggle for freedom – not as an afterthought but as part of the struggle. They drew on the traditional role of motherhood and used it as a concept around which to organise politically – demanding more freedoms for women as mothers and also for society at large. In her paper, Healy-Clancy wrote: ‘Lillian Ngoyi explained the arc of her activism in terms of this

transcendent power of motherhood: “The main thing is we do not want to discriminate. As mothers a child is a child”.’ Part of the politics of Fedsaw imagined motherhood as going beyond the home, which, she says ‘highlights both the extended family and the broader society as spaces where mothering happens, as the capacity to create life has given women spiritual authority in both precolonial and modern Africa’.

The women of Fedsaw took the previously domestic and private role of motherhood and made it public and political by raising concerns for each other as women, as well as for society at large. This is also important in challenging the masculine, often toxic environment of public space and politics, and its ideas about the place of women. An anecdote that illustrates this appears in Hilda Bernstein’s Fedsaw commemorative pamphlet: the year the federation was established (1954), Drum magazine asked its mostly Black readers to vote on whether women should have equal rights with men. The response, she wrote, was: ‘Out of 159 replies, 101 readers answered no. The winner of the prize for the best letter said: “Let us give them courtesy but no rights. They should continue to carry no passes for they are harmlessly inferior; put on their bonnets everywhere, for it is a shame for women to go bareheaded.”’ Bernstein commented: ‘This was, after all, only thirty-five years ago, and certainly represented a majority view. And it was these attitudes the women had to confront.’

The Women’s Charter was also very clear – in a way that continues to provide a means of measuring South Africa’s progress – about what the poor place of women meant for South Africa, and that it served as an indictment of society. It stated boldly: ‘The level of civilisation which any society has reached can be measured by the degree of freedom that its members enjoy. The status of women is a test of civilisation. Measured by that standard, South Africa must be considered low in the scale of civilised nations.’ In saying South African society represented a low state of civilisation, the federation was dealing with the very particular ways in which apartheid oppressed women, especially Black women. Through its charter, Fedsaw also articulated that, while the women of the federation would struggle for a society that was free, they would do so specifically with women in mind. Fedsaw foresaw that it was important to highlight women otherwise they would be sidelined. Also, that the attainment of freedom would be only partial if patriarchy was not addressed.

It is of great significance that, through the broad-reaching Women’s Charter, the federation was clear on how tradition and culture could be, and were, extensions of state violence. In a provision that remains just as relevant in contemporary South Africa – especially with the national conversation about land reform – the charter tackled women’s access to land and property.

This extract was republished with permission from Kwela Books. The book is available at all good bookstores and online.