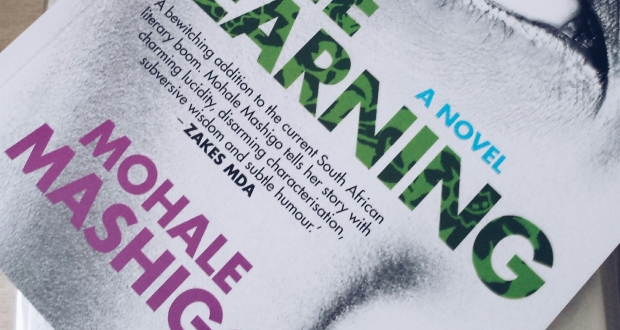 Mohale Mashigoâ€™s book, The Yearning, is one that takes the reader on a journey into the life of a young woman who has an endless yearning. The novel provides various possibilities for this yearning, and is set in the dusty streets of Soweto and Pietersburg, and the breathtaking city of Cape Town. SIMONE MATIKA reviews the novel.

When picking up the book, the title, and snippet from the writerâ€™s mentor, Zakes Mda on the cover, caught my eye. The quote: â€œA bewitching addition to the current South African literary boom Mohale Mashigo tells her story with charming lucidity, disarming characterisation, subversive wisdom and subtle humour.â€ To me, this sounded like another South African story based somewhere in the bundus about the witchcraft that is thought to be practised there.

It turned out to be more than that. It took me through a spiritual journey, and a cultural one as well. The first page of the novel is titled the â€œThe Yearningâ€. It is quite confusing, as the novel is structured in way that this page can only really be understood once you have read the entire book.

Mashigo divides the book in an unexpected way, with the chapters being titled: â€œThe Name, The Father, The Son, The Holy Spirit and â€œAmenâ€. Each chapter links to the current setting of the story and something from the past that describes the â€œyearningâ€ that Marubini.Â the main character, has. â€œThe Nameâ€ introduces the reader to the life of this innocent little girl who brought joy, comfort and rain to the family. It follows the story of her name which her granny, Nkgona gave to her. Not to reveal much about the book, this chapter calls for you to page endlessly and continue reading to understand how the life of this girl will unfold. In this chapter, a lot of characters are introduced, and what gave me the urge to page endlessly is how she unfolds her relationship with her family, friends, and boyfriend, who eventually she marries.

In the chapter, â€œThe Fatherâ€ she introduced me to her life in beautiful and breathtaking Cape Town. As a girl from Soweto, she shares how â€œliving close to the sea is calming.â€ She prefers being in Cape Town as the ocean â€œquiets my mind, it slowly puts me to sleep at night and sees me off when I drive away in the morning.â€ She also prefers it to the bright and loud â€œGauteng Maboneng.â€

The book is quite interesting, but played with my mind when I thought I had it figured out. As you read, you put together the pieces, only to find out later that you were wrong. Then again, I got to the end of the book and – surprise – she really did become what I had initially thought she would be.

I think Mohale did this on purpose, but I understood the â€œyearningâ€ as the journey that her father took as the same one that she would take. Her father had to become a traditional healer when he received a calling. However, as the story unfolds, it reveals a different yearning which, personally, I found uninteresting. Marubini actually has all the signs that her father had which had made him go through the traditional rites to become a healer. This was something that her mother and her granny feared for the little girl, so I thought that was the â€œyearningâ€ in the title.

But it turned out not to be.

Perhaps her yearning was to know why her father went through what he did, because the girl is described as being curious. Marubini is also a described as a very weird child who would rather choose to spend the day with her grandfather than go play outside with other kids. To me as a reader, this might be something interlinked to that yearning. But it turns out that she only feels the urge of the yearning when she is older and living in Cape Town. She starts getting dizzy spells, children singing in her head and a dark shadow haunting her in her house. She only feels relaxed when she is in water, and these are clear signs that she has a calling. Her dad got the calling, so she will likely get the calling as well.

Her past haunts her so much it wants to be unfolded. She keeps getting dreams that are based on her childhood. The dreams confuse her, and the only way she can understand what is going is by consulting her elders. Sometimes, it took me a while to understand what was really going on. At times, I had to go back a few pages just to understand what just happened, or why this issue is being brought up – how does it link up? This helped a lot because I would understand and made me want to read further.

From my own culture, I know of rituals and things like the callings. It was interesting how this aspect of the story unfolded, however, it came as snippets of information. To me, this was the main characterâ€™s biggest yearning.

Her brother Simphiwe is another interesting character. He is the one that helps her through her journey. Although he is younger than she is, he convinces her to speak to her elders so she can understand why she was getting the dreams. He reveals all her dreams and her journey with the art that he creates. This was very weird because he would draw something and few weeks later she would dream exactly what was in his art. They only notice the connection when he reveals a file of all his art, which turned out to be a sequence of her dreams and the â€œyearningâ€ she had. They say dreams have meanings. I never used to believe this, because dreams are your inner consciousness or thoughts. But this part of the book made me question my own dreams… maybe they mean something?

The end of the book revealed what I had suspected (no spoilers). I wanted to read more, but the book ended rather prematurely. It became interesting but, yet again, only a few snippets were revealed. Thanks to her brotherâ€™s art, she got to unfold her â€œyearningâ€ the same way her father did.

It is quite an interesting book and a good one, but I felt it to be too short. It’s the type of book you do not want to put down. I believe that it could help many people understand why we have South African traditional healers. It reveals the way that they are called and how the traditional rite takes place, and although it does not reveal much, itÂ goes a way to helping people understand some of South Africa’s cultural dynamics.