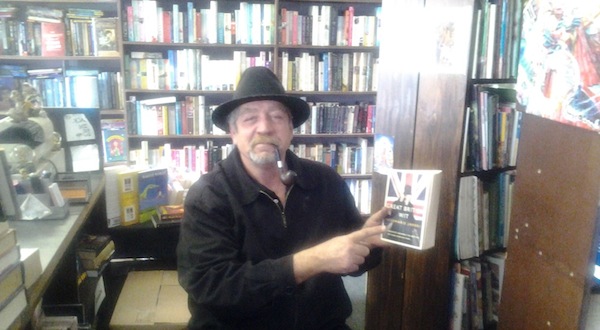 â€œQuite a mix you got there. Thatâ€™s how you know you’re not reading to pass time, but reading because you love books,” Chris Smit, the owner of Book Browzer, tells me as I stand at his till holding a copy of Steinbeckâ€™s Of Mice and Men and Across Africa on My Bicycle by South African explorer Rian Manser.

The tiny second-hand bookstore sits tucked neatly between a funeral parlour and a property letting agency in Melville. I can never resist the urge to peruse the shelves in the hopes of finding some hidden treasure or bargain when I pass by.

Chris smokes a pipe and has anÂ encyclopedicÂ knowledge of English literature. He opened the store with his partner Natasha Adegent several years ago, combining their shared love ofÂ the written word with a way to pay the bills.

â€œI see young people walk through these doors and I see their faces light up when they find a book theyâ€™ve been searching for. We donâ€™t get many but I still love watching it happen,â€ he says.

â€œYoung men today walk around wearing this badge of honour which I donâ€™t seem to see. There is this confidence and bravado associated with being an airhead. If you read books or the newspaper youâ€™re a nerd or accused of acting â€˜oldâ€™. Books will set your generation free, but they seem to celebrate wearing these shackles of ignorance,â€ he tells me.

According to the Unesco Institute for Lifelong Learning, one million children in South Africa live in a household where no adult can read.

In a recent survey, it was found that just over 50% of South African families own no books for recreational or leisure time reading.

South Africa’s literacy crisis was compounded further in 2003 when The Department of Education found that the average Reading Comprehension and Writing score for entry level university students was 39%. A scathing indictment on a country that in the next 10 years analysts predict, will have its youngest population ever.

Chris worries about the way technology and tabloids have been adopted by young people as primary sources of information.

â€œReaders are leaders, it also matters what you choose to read, but before that we just need to get young people to read something. The day we have more library cards than credits cards in circulation, is the day South Africa gets its youth back,â€ he says.

He points to a quote above the door by the late Maya Angelou: â€œIf I were a young person today, trying to gain a sense of myself in the world, I would do that again by reading, just as I did when I was young.â€

â€œWhy did you stick it outside the store?â€ I ask.

â€œBecause many youngsters pass by but never enter. If they donâ€™t leave with a book, they should leave with those words.â€