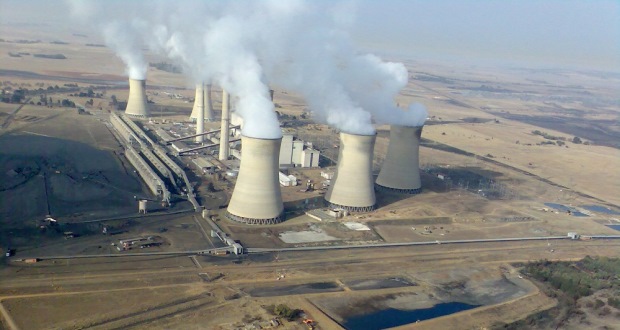 Ahead of their three-day long campaign against fossil fuels and its impact on peopleâ€™s livelihood, climate change organisation,Â 350.orgÂ held a press briefing to detail the structure of the campaign, Break Free from Fossil Fuels. 350.org, together with other organisations presented a mouthful at the briefing and THE DAILY VOX sums up the nitty-gritty.

Mzansiâ€™s addiction to coal has resulted in the doubling of CO2 (carbon dioxide) emissions in the past 56 years. We are ranked the 12th largest CO2 emitter worldwide and the environmental impacts of the coal sector are huge. 350.org is calling on South African government to stop clinging to volatile fossil fuels and consider a cleaner and fairer renewable energy.

From May 12 â€“ 14, a series of events is planned by 350.org to keep coal under the ground and lead the fight against coal mining and the sectorâ€™s corruption. The events, under the umbrella Break Free from Fossil Fuels will include protests and a visit to South Africaâ€™s coal mining hub, Emalahleni in Mpumalanga to raise awareness. The campaign will speak out against fossil fuels, climate change, and their impact of drought and hunger.

Climate crisis and fossil fuels
Coal-fired power plants are the biggest source of man-made CO2 emissions, making coal energy the greatest threat facing our climate. People are already living the impacts of the climate crisis, with 2014 and 2015 recorded as the hottest years. South Africaâ€™s El NiÃ±o-induced drought is exposing weaknesses in the stateâ€™s response. 2015 was the driest year on record for SA. Harsher and longer droughts, heat waves and extreme rainfall canâ€™t be separated from the causal impact of climate change.

Climate change, drought and hunger
South Africaâ€™s drought is affecting millions of people and increasing starvation. Climate change is further exposing the problems with a corporate-controlled food system. All measures of food prices are showing a dramatic increase in food inflation, with year on year increase of staples particularly. The biggest increases have been in mealie meal, samp, cooking oil and potatoes. Food profiteering denies us the right to food under the constitution.

The hunger crisis and high food prices
Food price inflation has increased by 13.4 % since November 2015. In January 2016, food prices had increased by 6.9%. Bread companies are taking advantage of the drought and artificially increasing their prices. A brown loaf now costs 5.73% more than it did last year.

While the state is responding to commercial farmers, it is not doing enough for smaller scale farmers and poor communities. Moreover, food inflation has eroded the value of social grants. According to PACSA (Pietermaritzburg Agency for Community Social Action, the total of old age pension (R1, 510 in April/October 2016) cannot actually cover the cost of a food basket (R1,879.24 in February 2016). Moreover, a minimum food basket for a household of four costs R2, 420.77 in February 2016. In South Africa, 27 million people earn less than R3, 000 per month. With food price increases, particularly of staples, hunger is going to worsen. Already, one in five children suffers from malnutrition and learning disabilities.

For more information and how you can play your part, email chris@350.org or visit southafrica.breakfree2016.org.