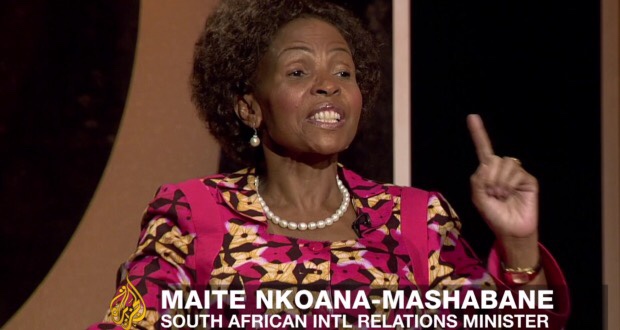 South Africaâ€™s international relations minister Maite Nkoana-Mashabane appeared on Al Jazeeraâ€™s Talk to Al Jazeera over the weekend and gave one of the most bizarre interviews the network has ever seen. AAISHA DADI PATEL explains.

After already interviewing EFF and DA representatives Julius Malema and Mmusi Maimane, Al Jazeera framed the interview with Nkoana-Mashabane as one to discuss Parliament, corruption allegations, and the future of the ANC, particularly in the lead up to municipal elections in South Africa later this year. But the usually poised Nkona-Mashabane – who was labelled a â€œsleepistâ€ by the EFFâ€™s Mbuyiseni Ndlozi earlier this year when she fell asleep during the debate on the impeachment of President Jacob Zuma Â – lost the plot a little bit, evading questions and answering incoherently and haphazardly.

Actually what was Maite Nkoane Mashabane doing in that Al Jazeera interview? What was she doing ??

Nkoana-Mashabane sat down with Jane Dutton – a South African journalist based at Al Jazeera in Doha – and made a series of jibes at Dutton during the cringeworthy 22-minute interview. When Dutton opened by asking about what kinds of messages violence in Parliament sends out, Nkoana-Mashabane responded by saying â€œThere’s so much positivity in your country. I thought you’d remember that.â€

Nkoana-Mashabane – formerly the ambassador to Malaysia – attempted to switch roles and ask Dutton her own questions. â€œLet’s talk about the most relevant issues. You and I are the same age group, but you never carried water cans on your head – I did. When I was ten, I marvelled at a flush toilet for the first time because that was a pipe dream for me but not for you. You and I come from different worlds.â€

And while Nkoana-Mashabane no doubt speaks of a reality of the inequality in South Africa, particularly as it was under apartheid, Dutton asked whether this was relevant when talking about moving forward. Nkoana-Mashabaneâ€™s reasoning for why it is? â€œIâ€™ve got a hole in my head.â€

*uncrushing Nkoane Maite Mashabane for being an airhead with a hole in her head* ?

When Dutton again brought up the issue of fights breaking out in Parliament, Nkoana-Mashabane gave a slightly confusing answer after reiterating that she was an â€œELECTED member of Parliament.â€

â€œThe South Africans I represent – my generation – 80% of them no longer do that and 20% want Parliament to be dealing with the real issues.â€

And when asked what she made of Julius Malemaâ€™s statement that the EFF â€œwill take power by the barrel of the gunâ€, her response was that she doesn’t know because â€œsome of us had to raise small babies. Before I’m frightened of Malema I’m frightened to see a woman with a water can on her head in South Africa in 2016.â€

She dismissed questions on the recent shifts in Cabinet (“Nene is not the first minister to be removed from Cabinet”), avoided questions around Pravin Gordhan (“I’ve never sat in an interview where I discuss speculation”), and defended President Zuma. “I learnt so much from that order of mine because he fought for freedom and he is a very patient man.”

When questioned about Zuma’s corruption, she didn’t miss the opportunity to turn it into a jibe at Trevor Manuel. After Dutton said that “high-level players” such as Manuel urged Zuma to step down, Nkoana-Mashabane coolly responded, “When he was appointed, because of the colour of his skin he was called the minister of common sense… I don’t know if there are categories of people whose opinions we value more that than the rest.”

But perhaps the most shocking bit came when the the minister completely dismissed a clip of a young South African, speaking about how he is worried that the ANC is not the same as Mandela’s ANC, and is marred by corruption. “I don’t know if he’s even old enough to vote,” she said. “I’m a mother of six and a grandmother of a six-month-old. I want to say to this young man, I wish you could be like my children who say South Africa is the only country where 300-350 years of apartheid’s legacy has been demolished in less than 20 years.”

When Dutton pressed about the EFFâ€™s growth in popularity, Nkoana-Mashabane immediately dismissed it. â€œEFF is a party led by young people who got 6%. The little arithmetic I know means that 100% minus 6% doesn’t equal popularity.â€

Nkoana-Mashabane insisted that there is no political uncertainty in South Africa. All South Africans want, she said right after reminding Dutton that the ANC is the oldest liberation movement in Africa, is to have jobs and bread on the table.

And in an attempt to shift the focus slightly right before the interview ended, Dutton asked Nkoana-Mashabane whether she had a favoured candidate for the US elections. Our dear minister of international relations (you know, the one who needs to pay attention to what happens in other countries?) responded rather aggressively. We quote verbatim:

â€œMy children are still concerned about their own country. And for your information, because you don’t stay at home, South Africa is still intertwined globally as it was and that’s why people want to know what’s happening on a daily basis and we answer all the questions. The sun shall rise and set and South Africa will remain a global player, a member of BRICS, a member of the G20, of all other respected multilateral institutions, a country led by such solid leadership that the French are thanking us todayâ€¦â€

And after a very exasperating 22 minutes, the interview came to an end – without any kind of substantial contributions from Nkoana-Mashabane.

Department of International Relations and Co operation spokesperson Clayson Monyela defended the minister on Twitter by saying that she was â€œtired and irritableâ€, but that he was arranging media training for her.

But there’s no doubt about it – Jane Dutton is a soldier for sitting through the most.