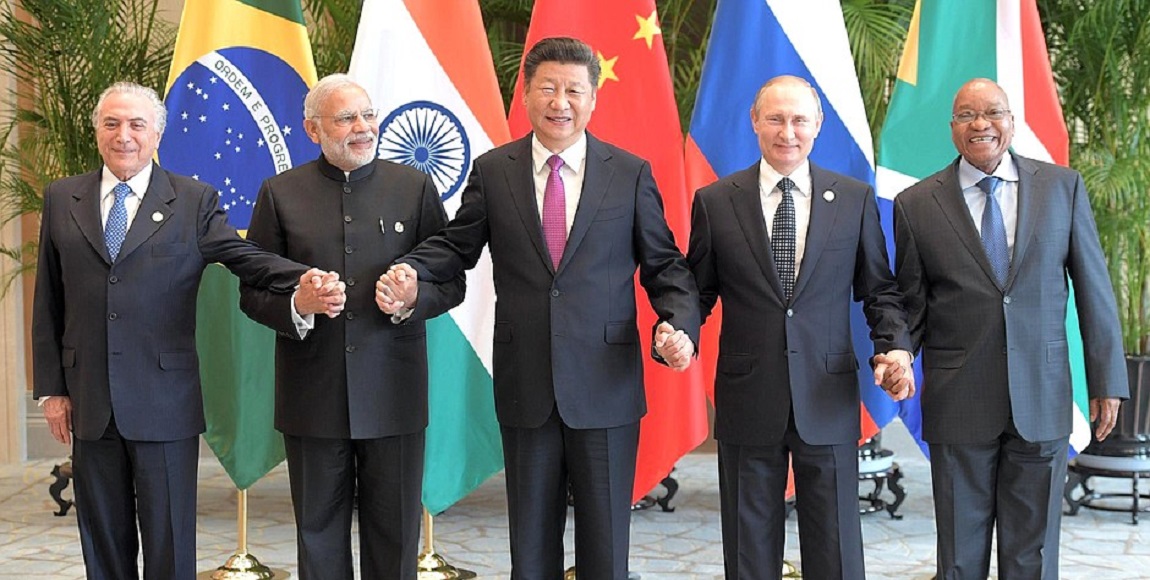 The Brics Summit is taking place from July 25 to 27 in Johannesburg, South Africa. BRICS is made up of Brazil, Russia, India, China and South Africa. The Summit is the Brics countries meeting with each other to discuss policies and developments. The grouping has been hailed as an alternative to international institutions like the G20. It has been called revolutionary in some circles. But is that the only way we should be looking at the Brics grouping? FATIMA MOOSA takes a closer look.

However, that is not the only lens we should be using to examine the summit and the grouping through. A group of workers, feminists and activists have gathered at the Wits School of Governance to discuss the Brics summit and how it does not represent an alternative world order but rather a continuation of more of the same. The teach-in will be a platform to debate on the need for the internal problems with Brics to be fixed before it can be portrayed as an alternative.

Geopolitricks: thereâ€™s nothing radical about President Jacob Zuma or BRICS

Patrick Bond, political economist at the University of Witwatersrand, said in an interview with The Daily Vox that there has been a failure to ask the tough discussions about the Brics Summit and the grouping as a whole.

He said there has been big push from Iqbal Surve and the Independent Media and DIRCO (the Department of International Relations and Cooperation) to make it appear like Brics has all of the solutions. However, Bond says Brics has been an amplification of neoliberalism, climate destruction, ecological disasters, exploitations, gendered violence and a general amplification of the problem.

“We are of the view that you can’t have an overarching network of tyrannies that will do any good and therefore you need to change the Brics internally,” says Bond.

Bond says groups like trade unionists, feminists movements, student movements etc tend to be sidelined when dealing with global change and the teach-in wants to showcase those views as very necessary.

“The crucial thing is Brics from below is what we’ve been doing for five years starting in Durban and every other Brics conference is a critique of Brics from above but also Brics from the middle,” said Bond

He said the middle is the layer of journalism and academia and civilised society like Oxfam who promotes a harmony model with the tyrants. Bond says there needs to be more nuance as the “middle” which is buying into the sunshine story is very dangerous. This is especially as there is no courage to ask the difficult questions.

The Brics summit brings together ministers, academic and media from the five members countries and all around the world. Most importantly, it brings together the heads of states of each of these countries, all whom are impressive in their own right. There will be Russia’s Vladimir Putin, China’s Xi Jinping, India’s Narendra Modi and Brazil’s Michel Temer along with South Africa’s Cyril Ramaphosa.

Hereâ€™s What You Need To Know About The Brics Summit

However, with the exception of Ramaphosa (who arguably has not been president for very long) all of these leaders have very spotty careers. There is the human rights violations, media freedom violations and corruption, just to name a few.

Russia has just completed the hosting of the 2018 World Cup. The tournament was hailed by all as a successful tournament with even the naysayers being won over. However, looking at just the World Cup, the human rights violations were so high.

There was the workers who worked on the stadiums being treated terribly. Then there was Chechen ruler Ramzan Kadyrov, who is one of the most renown human rights violations being given a platform during the World Cup. Russia has notorious anti-gay laws which all seemed to disappear during the duration of the World Cup. yet, queer people continue to discriminated, jailed and killed for their identity.

So while all of that goes on in Russia in terms of huma rights violations, any queer laws and terrible labour practises, somehow we don’t expect these to be raised during the Brics Summit. Questions need to be asked about what type of platform this is if these are the conditions which people in Russia are being forced to live in.

While in Russia, there are the anti-queer laws and human rights violations, in India there is rampant Islamophobia which is on the rise. Muslims are victims of violence almost on a daily basis and it is the government institutions who are failing them the most. The laws of the country favour the perpetrators of the violence while the politicians especially those from the Hindu far-right continue to support them as well. As of this has happened and is being partly supported by Narendra Modi’s government.

Additionally there is the response from the Indian government to Kashmir. There has been a huge crackdown on people and activists in Indian-controlled Kashmir. The United Nations have called for an enquiry into the disparate use of violence in the area. The Indian security forces have been accused of using excessive violence against civilians in Kashmir.

Civil society organisation, Muslim Lawyers Organisation in fact filed a charges to arrest the Indian Prime Minister the moment he arrives in South Africa. However, because the event is protected under international diplomatic rules, he won’t be able to be arrested.

The other members countries Brazil and China don’t fare much better in dealing with their citizens in a just and fair manner. In China, human rights violations are high and the media freedom to report on these happenings is severely curtailed. In July 2010, a Nobel Peace Prize winner Liu Xiaobo died surrounded by state security. There is an international blindness and normalisation of the human rights violations that are taking place in China.

Brazil’s Temer who became the president after Dilma Rousseff was removed on impeachment charges. While Temer was the one who pursued the corruption charges against Rousseff to get her removed, he was later implicated on corruption charges as well. While he denied any of the charges against him which were posed, there have remained a huge stain on his presidency. Temer had record low popularity ratings from the Brazilian population.

Other leaders expected to attend the Summit include Turkish president Recep Tayyip Erdogan and Egypt’s Abdel Fattah el-Sisi, both of whom have been accused of atrocious human rights violations against civilians and the opposition in their countries.

Many countries and corporations have been called on to criticise these governments and the actions they perpetuate. However, when it is those countries (the so-called free world) and companies are the ones who also perpetuate the system of inequality and injustice, the solution evidently lies in changing the system.

The Brics is meant to be a resistance against the global hegemony that exists and present an alternative global order. However, if the leaders and institutions involved with it continue to reinforce the same behaviours and injustices, there is really no cause to celebrate. There needs to be louder calls for internal reforms and changes in leadership if the Brics is truly to be called an alternative.