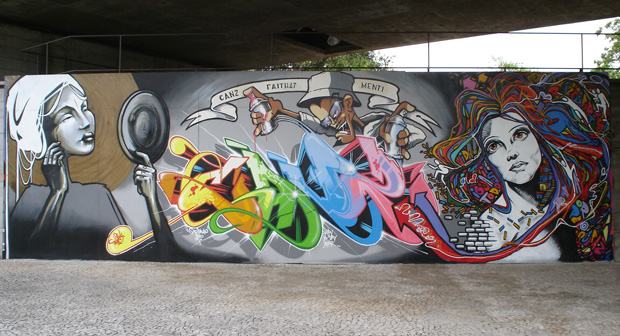 In 2014, we heard about Tokolos Stencils and their graffiti bombing against the powers that be, we heard about Brett Bailey and his human zoo theatre (no, really), and we couldnâ€™t get away from Michael Elion and his big olâ€™ sunglassesÂ dedicated to Nelson Mandela. Amid all this hoopla, South Africaâ€™s female artists might have slipped under your radar. To make sure that doesnâ€™t happen this year, here areÂ someÂ emerging South African female artists to watch in 2015.

Arts and culture writer Stefanie Jason sifted through many names to narrow down a list for Okay Africa of nine female artists that she predicts will make 2015 that much more exciting. Some of them are already forces to be reckoned with.

Zama Phakathi, for example, is 23 years old and already owns her own gallery, StopSign Art Gallery, in the heart of Johannesburgâ€™s trendy Maboneng Precinct.

â€œThe inspiration behind starting the gallery was that I saw a gap in terms of resources for young people; there werenâ€™t enough resources for upcoming young artists,â€ Phakathi told Art Africa.

The gallery is inventive â€“ itâ€™s constructed inside a shipping container, making it a mobile showcase of art produced by emerging young artists from South Africa.

While Phakathi has created an innovate way to exhibit art, a young artist in Cape Town is using digital art to challenge what it means to be a black woman living in South Africa.

Tshabalala created a conversation around poverty and black women, and also helped set up donation page on social media for schoolgirls in Langa who canâ€™t afford sanitary towels and so stay home from school when they have their periods.

Tshabalalaâ€™s commitment to â€œtruth-tellingâ€Â when it comes to black experiences in South Africa sets her apart.