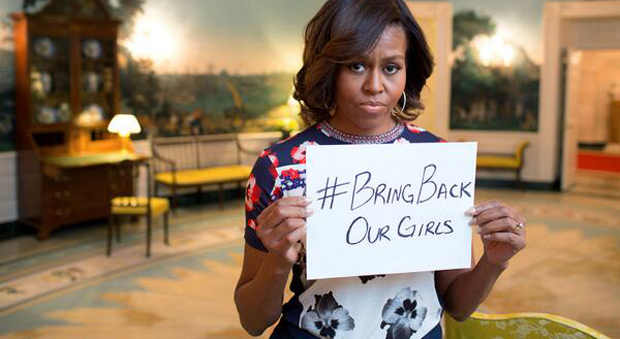 Monday 14 AprilÂ marked a year since the disappearance of the Chibok girls in Nairobi at the hands of Boko Haram â€“ the kidnapping that gave rise to theÂ #BringBackOurGirlsÂ hashtag, which launched millions of tweets and is arguably a primeÂ example of hashtag activism. In the year since it became a household hashtag, several other social-advocacy campaigns have run on Twitter also seeking to draw attention to their causes. But did they really make a difference? AAISHA DADI PATELÂ takes a look.

1. #YesAllWomen
After misogynist Elliot Rodger murdered six people and left almost 20 more injured before killing himself in May 2014, the #YesAllWomen hashtag trended worldwide for days. Rodger had publicly detailed his hatred of women and attempted to justify his actions by saying that his victims deserved it, because of what he perceived to be their rejection.Â People used the hashtag to speak about their own experiences of of misogyny and patriarchy, as well as violence inflicted upon them by men. #YesAllWomen became a symbol of solidarity with the victims and, at the same time, a celebration of womanhood.

2. #BlackLivesMatter
In August 2014, unarmed black teenager Michael Brown was killed by a police officer in Ferguson, Missouri, for no apparent reason.Â African-Americans immediately took to Twitter to voice their outrage against police brutality in the US, and soon many people joined in from all over the world to reiterate that black lives matter, and that police brutality and discrimination against black youths must end.

3. #WhyIStayed
In September 2014, a video of an American football player beating up his fiancÃ© in an elevator went viral â€“ but the woman in question, Janay Rice, said that she was standing by her husband and that she had forgiven him. Many women berated Rice for staying with her abuser, and said that if she stayed she had no one to blame for the abuse but herself.Â This sparked off the hashtag #WhyIStayed, where women and other victims of domestic violence and abuse shared their stories about the complex reasons why women often choose toÂ stay with their abusers. The hashtag enabled women to reach out to each another, to show their supportÂ andÂ also give people a deeper insight into the complex, often taboo topic of domestic violence.

4. #OccupyCentral & #UmbrellaRevolution
In October 2014, thousands of Hong Kong students took to the streets to protest against electoral reformsÂ that would have put limits onÂ their democracy. The Twitter hashtag was #OccupyCentral and people all over the world added their 140 characters.Â The crowds continued to swell in a movement that was labelledÂ â€œthe most polite protest everâ€ and what was originally a student movement developed into a mass movement where people of all ages, cultures, and social backgrounds came together in a unified call for democracy. Protesters used umbrellas to protect themselves not only from the incessant rain but also from the pepper spray used by policeÂ and soÂ the alternative hashtag, #UmbrellaRevolution, came into being.

#UmbrellaRevolution in #HongKong with over 2.3 million Tweets now, see how it played out – http://t.co/k4iI6vPHt8 pic.twitter.com/xFpQXHZlIP

5. #JeSuisCharlie
On 7 January 2015, two armed gunmen walked into the offices of satirical magazine Charlie Hebdo and opened fire, killing 12 people and injuring 11 others. The attack was purportedly carried out in protest of drawings and content that offended (some) Muslims.Â The attack was immediately labeled a â€œterrorist attackâ€ by French president Francois Hollande, and people the world over tweeted in a frenzy using the hashtag #JeSuisCharlieÂ to show their solidarity with victims. AÂ march organised in the French capital under the hashtagÂ wasÂ attended by world leaders and civilians alike.

Support forÂ hashtags like these have shown that social-media activism can become more than just â€œslacktivismâ€.Â HashtagsÂ get people talking, encourage solidarity and raise awareness. But even taking into account this fact, the question remains: when will the 219 Chibok girls who are still missing be brought home?