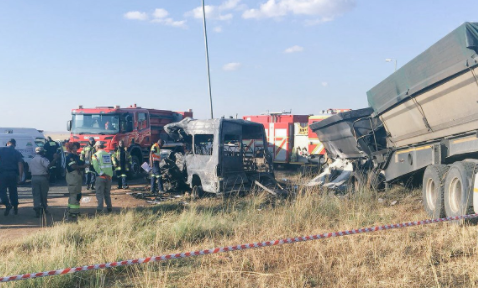 On Friday, a horrific accident took place outside Bronkhorstspruit. A minibus taxi carrying school children crashed into a truck. TwentyÂ people, including 18 children were killed, some burnt alive. The accident has sent shockwaves across the country. But this is certainly not the first time an accident has taken place in the area. In October 2016, anÂ accident, also involving a minibus taxi killed three children from the same area. TS Skosana, an educator at the neighbouring Sizakhele Primary School, says that this is an area where parents already find it hard to educate their children. Such a tragedy only sets the community back. She would know – she lost two of her grandchildren in the accident in October 2016.

I was in Bronkhorstspruit when the accident happened. Then I came over to the school where people were meeting. The families are really, really sad.

This is an area that is already struggling. Many of the school children are from home where parents don’t have work. If they have work, it is in Pretoria – where they work as drivers, builders, or domestics. Some of the children in the schools here are orphans. It is such a situation, that the teachers often give the children food. What ever is in our hands, we give them. When they come to school, we ask them if they have eaten. This is the kind of place.

In my school, we don’t have water. We have 670 children, with ten toilets. They are pit toilets, inside the school area, and it smells. We have textbooks but not even books for children to read, or get better at English.

I feel sorry for what has happened. Last year, two of my grandchildren died in an accident in the area. They were also in a minibus. Basically, the minibus tried to overtake a truck and it hit a car. My grandchildren were in grade one and grade eight.

So when I heard about this accident yesterday. I nearly fell down in shock. All the memories came back.

Men are the cause of most accidents on our roads

It takes time to recover from such a thing.

The families are so sad. When I saw them yesterday and this morning, they were crying. I did not ask if they blame anyone. But people seemed to have been blaming the driver of the taxi.

It took a long time for me to recover. I have done everything I could … it is difficult to be okay, to be better, after such an incident. And so when I heard about this accident, I felt the pain return, again.