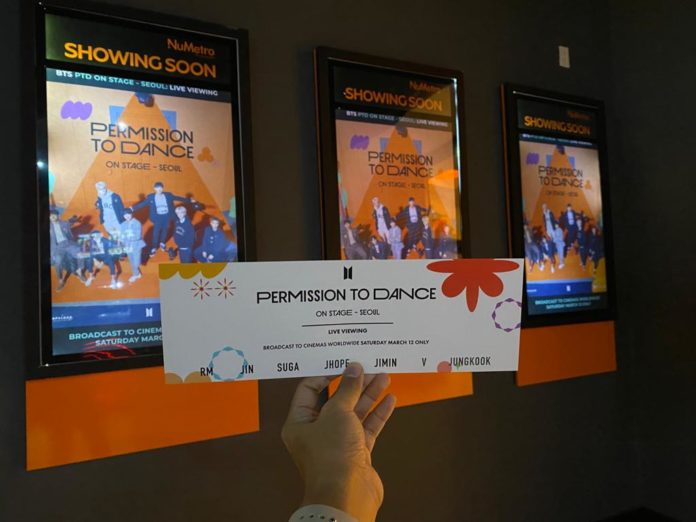 As a co-administrator of a BTS fanbase, I sometimes know things before the general public has confirmation. In this case, I knew that BTS’ highly anticipated Permission to Dance Live – Seoul would be streamed in South Africa. I also knew that Cape Town would, unfortunately, be the only city able to participate due to the technology and infrastructural requirements stipulated by the global distributor. This realisation was incredibly bittersweet. I knew that the live-streamed concert was something so many South African ARMY were looking forward to. But I also knew that roughly only 1000 people would be fortunate enough to be a part of this historic event. BY Naazneen Samsodien.

On Saturday March 12, when I entered Canal Walk in Cape Town, I could easily discern the BTS fans from regular mall-goers. It was evident from the t-shirts, headbands, backpacks and jackets all bearing the iconic BTS insignia. But it was also the determined walk, the sparkling eyes and the air of excitement radiating from the hundreds of eager cinema concertgoers. For almost everyone attending, this would be the closest they’ve ever come to an in-person BTS concert experience (for now). This anticipation was palpable; the air electric with expectation and nerves.

By 9 AM, NuMetro already had queues of ARMY lining up to get into the theatre. The staff, however, were well prepared and mindful of COVID protocols. NuMetro were organised and efficient – directing fans into the right queues quickly and processing their food and beverage purchases with speed. A delightful surprise was the specially branded soda cupsleeves and popcorn boxes for all Permission to Dance concert goers! It was a lovely touch by the cinema team and along with mini banners provided by our fanbase, was a precious keepsake for ARMY.

If you’ve been to a BTS concert, you’ll know that ARMY doesn’t wait passively for the concert to begin. It was no different in the theatre. By the time I took my seat at 11 AM, the entire cinema was buzzing with the voices of ARMY singing along to the BTS music videos playing on the massive screen. This fan tradition truly set the mood for what I was certain would be an epic time.

With the tension steadily ratcheting up inside the venue, when BTS finally emerged on screen to the strains of their hit song, “ON”, all I could hear were the near deafening screams of euphoric fans. ARMY jumped out of their seats, some with ARMY bombs, some without, dancing and singing along with unbridled enthusiasm. Crowd favourites, “Fire” and “Dope” followed in rapid succession, the screen and sound quality in theatre in perfect synchronisation with the live event in Seoul.

There are many outstanding moments, but it was the contemporary dance break for “Black Swan” that stole my breath. A sea of backup dancers joined the members on stage, using their bodies to create stunning visuals of water and swans rippling in motion. The camera swirled around the dizzying formations with ease, leaving us all feeling as if we were right there beside the stage, not thousands of kilometres away. Amidst plumes of smoke and feathers, BTS transitioned from “Black Swan”, to the crowd pleasing “Blood Sweat & Tears” and then “Fake Love”. Cacophonous fanchants of “Fake love! Fake love! Fake love” ricocheted off the soundproofed walls, accompanied by stomping feet and passionate expletives as Jungkook flashed his abs mid choreography.

If I thought the fever pitch could not be matched, I was proven wrong. The trio of “Outro: WINGS”, “Stay” and “So What” lay the perfect foundation for “IDOL”. Every ARMY in the theatre collectively roared in an outpouring of emotion. Feet stomping, hands waving, voices merging in perfect synchronicity, Cape Town ARMY lost all sense of time and place. The moment was heady and magnificent, goosebump-inducing even now, as I recall it. On screen, BTS’ energy was unwavering as they notch the tension even higher and carry the incredible momentum towards the concert’s end.

Despite the cold and rain in Seoul, the members give their all on stage. “HOME”, “Anpanman” and “Go Go” was where all of us dug deep to mime the accompanying choreography as our now hoarse voices refused to accept defeat.

Encouraging ARMY to dance with them, BTS ended the show with the concert’s namesake, “Permission to Dance”. Inside the theatre, the aisles are filled with ARMY who could no longer be contained by their seats. We had all reached communal euphoria, our fever pitch, actual bliss.

In my opinion, the cinema concert experience was the next best thing to an actual in-person show. The crisp visuals and clear sound were phenomenal and allowed attendees the opportunity to feel within reach of the action. Being close to the members, as well as being close to fellow ARMY is what a concert is truly all about. The cinema livestream was conducive to achieving both of those objectives.

BTS and their team pulled out all the stops. The show centred around all seven members, and the production made sure to highlight this in visually appealing ways. Switching from colourful stages with hoards of backup dancers to members traversing the stadium in giant carts, the concert offered something for everyone. The setlist switched between songs from their earlier discography and blended well with their newer additions. Most importantly though, the show focused on BTS and ARMY, with the song choices clearly crafted to celebrate the group as a whole and their connection to their fans.

The only downside to an otherwise perfect day was the unfortunate power outage that affected large parts of Cape Town and by extension, the NuMetro cinema. Hundreds of ARMY who booked tickets to the rebroadcast lost their opportunity to view the repeat screening. This was heartbreaking, made even more tragic because the show was an exclusive and would not be screened again. A once in a lifetime moment was cut short for so many deserving fans.

The experience, however, is one I will cherish forever. To the Cape Town ARMY who attended the show, what an epic display of ARMY might and power! And to all the ARMY who were not able to view the show, we hope there will be bigger and better shows just around the corner.

Naazneen is a Human Capital Head by day and an ARMY day and night. She fell in love with BTS in 2017 and now balances a busy professional life with the fun and excitement that comes from managing a BTS fanbase. In 2018, she was blessed to see BTS at their historical Citifield Stadium concert in New York City, as well as in Hong Kong a year later. In 2020 and 2021 she contributed to two books about BTS, “I Am ARMY: It’s Time to Begin” and “BTS by ARMY: 2020”, fulfilling her dream of becoming a published author.