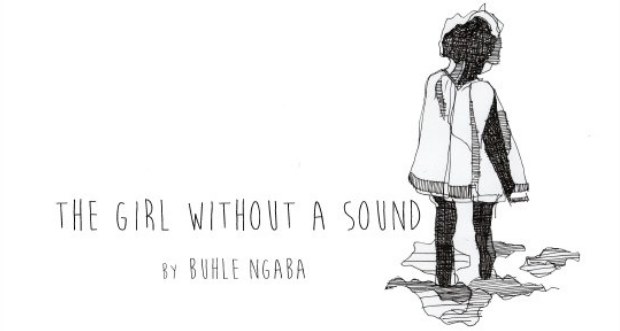 As an act of restoring power and agency to young black girls in South Africa, BUHLE NGABA wrote a story about a voiceless girl of colour in search of her own sound. For it to be the catalyst that reminds black girls of the power of the sounds trapped inside them. She describes the journey of her book, A Girl Without a Sound to MBALI ZWANE. The book was born out of defiance and as a response to the fairytales we were told as little girls. Stories about white princesses with blue eyes, flowing locks of hair and an overwhelming awareness of their beauty. More than that, I want it to be a healing balm for all who read it. For the black female bodies that are dismissed or violated in a white, patriarchal and racist reality.

Iâ€™m a storyteller, actress, activist and most recently a writer. I worked on a play written by John Kani called “Missing” which was on at the Iberoamerican Festival in Columbia on March 7. Iâ€™ll be launching a campaign in a few months to raise money for female sanitary products (specifically mooncups) for young girls in the North West district, who miss days of school due to a lack of sanitary products. I also launched a six-week Constitutional Law Drama Workshop series at Amazing Grace Children’s Home in Johannesburg under the banner of my NPO KaMatla Productions.

I am from a close-knit family whose foundations are built and strengthened by women. My fearlessness is a direct result of that so I would say relationships with women for young girls are vital. There are some strengths that can only be passed among women. The rawest version of the story was written for a very special woman in my life for her birthday. She handed me my first book of rhymes when I was six years old and I developed a love, a bordering obsession of imagination and literature. Without those two things, I donâ€™t think I would have been brave enough to be a storyteller.

I am at my best when I feel useful or stretched towards something bigger than me. That is why I was compelled to write this story and release it the way I did. The Girl Without A Sound is me but it is all of us and it is about time we all started searching for our sounds. The world needs them, especially now as it bleeds and festers. The book is a message of hope for all women of colour to keep searching for our voices, to fight to be heard and to use them loudly to implement change. It is a call to action.

The challenges I faced as a young black girl in South Africa havenâ€™t changed that much as Iâ€™ve grown older, which is why I was inclined to write this book. All that has changed is that my awareness of self and my place in the world has just become clearer with age. Along with my insistence on valuing my personal being in a world that dismisses it.

When I was younger, I was always aware of how a lot of people wouldnâ€™t bother to learn my name and were comfortable with either pronouncing it completely wrong, like “Bushle”Â or giving me a nickname. As a little girl, this dismissal of your name feels like a dismissal of your entire being, where you are from and your lineage. I think this taught me early that society is very comfortable with writing narratives over black bodies and if you let them, they will. Thatâ€™s just one very broad example of the challenges that all grown black women in South Africa face now. We are continuously ignored and devalued, which is why we need to raise our voices so we are heard.

One weekend my younger cousin finished reading the first Harry Potter book and then watched the movie. Later she asked if wizards were only white because there were no wizards who looked like her in the movie. She then went on to say that her friends Tshidi, Zandile and herself couldnâ€™t be wizards and only her friend Jessica could. This is one of the reasons we made this book and why the hashtags #BooksForBlackGirls and #GirlWithoutASound matter. Little black girls need stories written about them and for them. I walk into bookstores and thereâ€™s no sections of black literature in stock, and definitely none by black women. If we don’t use our words and use them loudly, we remain invisible.

Putting the book together wasnâ€™t all that challenging. We managed to complete everything in three weeks and thatâ€™s because I have such an incredible team. All of them donâ€™t know each other but they agreed to get involved because they loved the idea and were keen to contribute their skills and time. Challenges have arisen now only because we have found the response to the book overwhelming. Within an hour of our website going live and making the book free for download, we crashed the internet due to traffic and our Dropbox link was suspended.

The book [was] free to download because I want those who I wrote it for, to be able to access it easily. As a child, I used to photocopy the pages of books I loved, print them and stick them on my wall. I imagine The Girl Without A Sound in every little girlâ€™s room in South Africa on any wall she might have or even just a printout of her own. I devised the book with my being clear of two things: it had to be easily accessible and I wanted it to include multimedia.

I think I have begun to find my own voice, and Iâ€™m getting brave enough to use it through this book.