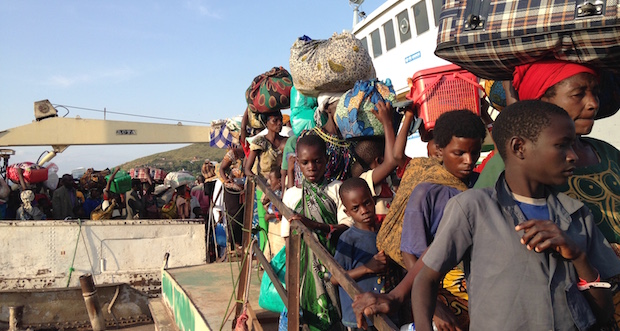 Thousands of Burundian refugees who have fled violence in their home country had found themselves stuck in the Kagunga village in Tanzania, where overcrowding and cholera now threaten lives. For the past 10 days, the UNHCR has been evacuatingÂ 2,000 people per day to the town of Kigoma.Â

The Nyarugusu camp outside Kigoma is heaving with refugees. Writing for Al Jazeera, journalist Azad Essa* says that with the latest influx of more than 64,000 Burundians into Tanzania, the camp is beyond its capacity. Essa travelled with hundreds of Burundians to from Kugunga village to Kigoma via a 100-year-old vessel. The vessel is one of two ships used by the UNHCR to transport refugees from Kagunga, where thousands had been living on the shore of Lake Tanganyika, and Kigoma, further south.

Though most of the refugees have made their way to Kigoma, there was still a high risk of disease after enduring significant overcrowding and poor sanitary conditions in Kagunga.

â€œReaching the refugees from Tanzania is only possible by boat. It is on these shores that the threat of disease, especially cholera, is at its most extreme,â€ Essa writes.

Sospeter Boyo, camp manager at the Nyarugusu camp where refugees were headed, told Al Jazeera that the site, initially built to shelter 50,000 people, was now sheltering double that number of refugees. As a result, there were plans to build a second camp.

Kapitorina Niyibizi, a 90-year-old refugee, says that she saw some of her fellow passengers die along the journey to the camp.

For Burundians fleeing political unrest, the conditions in the boat and in the camp are a long way from the peace they desire.

For more on the Burundian refugees fleeing into Tanzania, see Essaâ€™s photos from the boat.

Editor’s Note: Azad Essa is an executive editor at The Daily Vox.Â