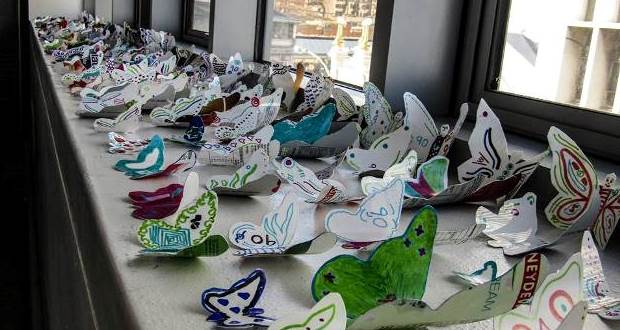 In the build-up to the International Aids Conference 2016, 600 youngsters are participating in the Butterfly Project run by the Denis Hurley Centre in Durban, in conjunction with Umcebo Design and DramAidE. The project, which is a legacy project initiative of the US Consulate in Durban, ran a six-day workshop which is aimed at getting young people from KZN involved in #AIDS2016 to envision an Aids-free generation by 2030.

Seth Piers, the project manager, told The Daily Vox, â€œThe Butterfly Project aims to involve and teach teenagers about the AIDS 90-90-90 initiative. If 90% of people get tested and of those, 90% are positive and 90% of those go on ARVs, they will eventually suppress the virus within themselves. If that happens, by 2023 we will have an Aids-free generation and then we will hopefully see a reverse of HIV epidemic and maybe a way of combating the virus without a cure – not that we are no longer looking for the cure.â€

Zamashenge Buthelezi (17), from Newcastle, plans to teach others what sheâ€™s learnt from the workshop. [dropcap]â€œ[/dropcap]My sister introduced me to the programme and when I got here I realised that it is a great initiative. It basically teaches us as young people on how to take care of ourselves and I have actually learnt a lot that I didnâ€™t know. Now that I am part of the Butterfly Project, I will be able to keep myself and those next to me safe. I will also make sure that I donâ€™t keep this information to myself but will pass it on to the other people such as my peers at school.â€

The projectâ€™s slogan is â€œFlying free from HIVâ€, and it targets teenagers because the organisers believe this is the stage at which they begin experimenting. But Kelvin Ifeonu (17) from Berea thinks the work should start at an earlier age; it’s nothing he hasn’t learnt before. [dropcap]â€œ[/dropcap]I was invited to the project by one of the organisers and it has all been informative. But I personally think that it is more important to the younger generation because most of us are now familiar with all the information and are already practising most that has been mentioned. This project will especially help the youngsters about the importance of protected sex and not being involved in sex at a young age. I will certainly share the information and knowledge with my younger siblings back at home.â€

South Africaâ€™s future is safe if there are more young people like Thobeka Mzimela (17), from Marianhill, who was inspired to get involved in this project after she had learnt about HIV/AIDS at another event. [dropcap]â€œ[/dropcap]As young people we are exposed to sex and we actually need to get a grip of how things are done. The session has already taught us about the use of condoms and protected sex in order to keep safe and since knowledge has been passed on to us, it is now up to me to pass it on to others. I was introduced to the Butterfly Project by some guys I met at the Nkosi Johnson Memorial summit where we were taught about HIV/AIDS, and as a young person I found it fundamental to become part of the project.â€ The project, while educating young people about HIV, was also an opportunity for them to express their creativity. They worked on making butterflies out of recycled materials, which were installed in the middle of the centre on Monday. Robin Opperman, of Mcebo Design explained the significance of the butterfly design: â€œWe chose the butterfly because we needed a symbol that would get the message across and the butterfly symbolises flying free from the HIV epidemic. Also, we decided to use the butterfly to represent the advances that are being made with HIV treatments. We involved teenagers of different nationalities so that the whole art piece will represent different people.â€

Images of the completed installation were uploaded to Facebook: