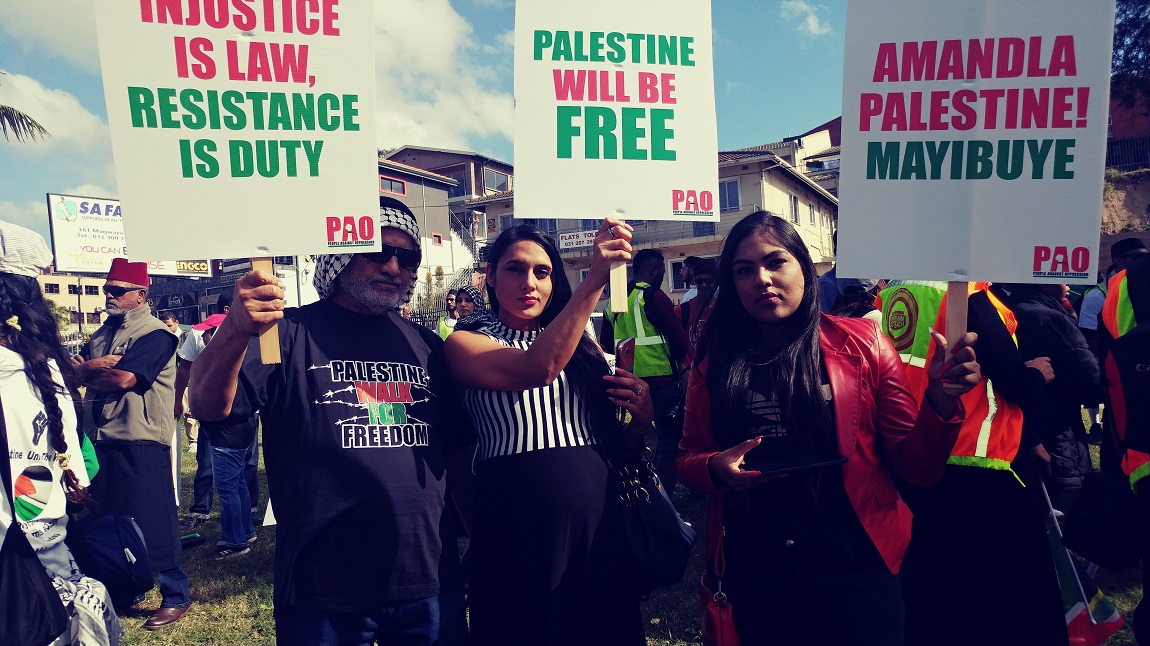 Concerned black marchers have called on the black community to support protests against Apartheid Israel in support of Palestine. This comes after the 14 May killings of over 50 Palestinians, including children, by Israeli troops. The march, organised by various groups under the banner of People Against Oppression was held in Overport, Durban on Saturday. Among the attendees were civic bodies, religious groups, and political leaders.

“People are being slaughtered just for fun. The very same thing that South Africans endured when the boers descended into our country and oppressed us,” said Sandiso Zungu, who was part of the march.

Zungu also said “Palestine was one of the countries that helped South Africa to fight against Apartheid, it’s our turn now to show them our support. We are now free and [the] Palestinians are being oppressed. We must unite against Israel and show Palestinians that we are with them.”

The march was to highlight the plight of Palestinians and show solidarity. More than 100 Palestinians have been slain at the hands of Israeli troops since the beginning of Gaza protests in late March. Recently, a 21-year-old paramedic Razan Najjar was shot and killed.

Another supporter Sifiso Duma said: “As South Africans it’s important that we play a role in fighting for other countries’ freedom as a nation that experienced oppression. Palestinians are human before they are Palestinians, and the blood that runs through their veins is the same blood that runs in ours. We are brothers and sisters.”

Mandela called on South Africans to join hands and show solidarity to Palestinians who he called political prisoners. He said that it was South Africansâ€™ turn to adhere to the international solidarity movement that called for a free South Africa and release of Nelson Mandela.

“Today we are gathered here to say that we calling for all political prisoners to be released by the Israeli government. We are calling on the Israeli government to give the six million Palestinians living in exile the right of return…apartheid Israel must be held accountable for genocide and crimes against humanity,” he said.

“Madiba said that our freedom is incomplete without the freedom of the Palestinian people. For myself personally, it is a continuation of Madiba’s commitment,” Mandela said.

Boycott Divestment Sanctions South Africa’s Muhammed Desai said that the march was to condemn the violence against Palestinians by Israeli forces.

He also urged people to come together and stand in solidarity with Palestinians during their struggle for freedom.

“Really it was the Palestinians, long before it was fashionable, who gave us the military resources, financial backing and other various forms of solidarity,” he said about their support of South Africa’s anti-apartheid struggle.