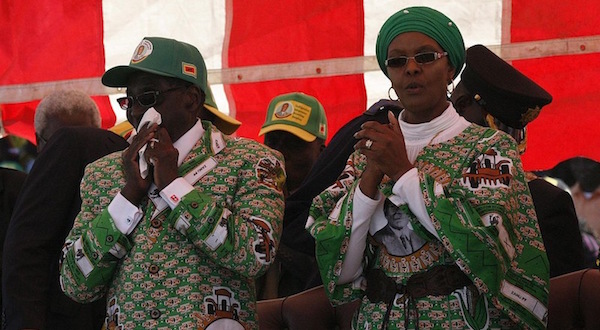 Bulawayo, Zimbabwe – From the sharp-tongued First Lady, Grace Mugabe, holding a string of rallies bluntly demanding that she be charged with treason and college students issuing a 14-day ultimatum for her to resign, Zimbabwe’s first female vice president, Joice Mujuru is under intense pressure to step down.

Accused of mass corruption and leading a faction within the ruling party to oust Mugabe, Mujuru has come under attack lately from Mugabe loyalists who allege she has used her office to bribe voters and extort money from investors. Mujuru and senior officials aligned to her are also accused of threatening to kill President Robert Mugabe and holding secret meetings with potential hit men from South Africa and Israel.

According to the state weekly, the Sunday Mail, Mujuru backers, Minister of State for Presidential Affairs Didymus Mutasa and suspended party spokesperson Rugare Gumbo, threatened to take Mugabe out like the late Laurent Kabila of the Democratic Republic of the Congo, who was shot by his bodyguards in 1998.

Gumbo has dismissed the allegations as part of a smear campaign to sully his name. He is being questioned by police over his involvement with Baba Jukwa, the sensational Facebook blogger and whistleblower who in the leadup to the 2013 general elections claimed ‘the people would topple the Zanu-PF dictatorship’.

Although the Mjuru has flatly denied any involvement in a murder plan and has threatened to resort to legal action to defend herself, the First Lady has upped the ante. Addressing hundreds of cross-border traders gathered at her orphanage close to the capital, Grace said of Mujuru, “We will dump you in the streets and the hyenas will sniff at you, but the flies will not come near your body and neither will the dogs because they don’t eat rotten meat.”

Wary of the bad publicity and immense pressure on Mujuru to step down, Jessica Moyo (32), an unemployed quantity surveyor told the Daily Vox, “She should just go, this is not good for her. The First Lady is constantly on TV talking about this issue and it’s swaying people in their minds to think that Mujuru is corrupt and evil, so she must resign. For her own sake it’s better if she goes. Mujuru should just bow out with grace.”

Speculating on the chances of Mujuru’s political survival, analyst and former National Constitutional Assembly spokesperson Blessing Vava, told the Daily Vox Mujuruâ€™s prospects appeared bleak. Nine party provincial chairs and several national figures who are allegedly aligned to Mujuru have had votes of no confidence passed over them in recent weeks.

“She will not survive this. She doesn’t have the capacity to resist. What has happened recently with Rugare Gumbo and others who have lost their positions indicates there is little she can do to avoid her removal, if it happen,” said Vava.

The ongoing purge within Zanu-PF is seen as a strategy to weaken one faction competing to succeed the 90 year old. The other, led by Justice Minister Emmerson Mnangagwa, Mugabe’s perceived political heir, has apparently been buoyed by Grace’s entry into party politics, raising suspicion she could be positioning herself and her allies for the vice presidency and ultimately, to succeed Mugabe.

With the party’s congress two weeks away, the veteran liberator is expected to receive his endorsement as the party’s presidential candidate for the 2018 elections when he turns 94. Mugabe is also due to appoint two vice presidents and a Zanu-PF national chairman. According to Zimbabwe’s Constitution, Mugabe has the power to appoint and dismiss the vice presidents without consultation. Traditionally, one of the posts is held by a politician from the Ndebele minority ethnic group and, since Mujuru’s appointment in 2004, the second vice presidency has been occupied by a woman. But with so much controversy over the incumbent, the gender balance could change at this year’s crucial congress.

As the ruling party prepares to meet to endorse Mugabe to run for another term in 2018, the future leadership of Zanu-PF is a key concern. On Mugabe’s succession, a prickly issue that has plagued the party for years, Vava said: “Mugabe will be very careful of leaving the leadership to Mujuru. What would happen to the First Family after all this? Besides, many of the people the First Lady has said are disloyal have gone so Mugabe is likely to leave leadership to someone who is loyal to him and his family.”

Firmly on the out with Grace and facing a raft of indictments, Mujuru’s political fate hangs in the balance. Her survival ironically depends on her detractors and Mugabe’s next move remains to be seen.