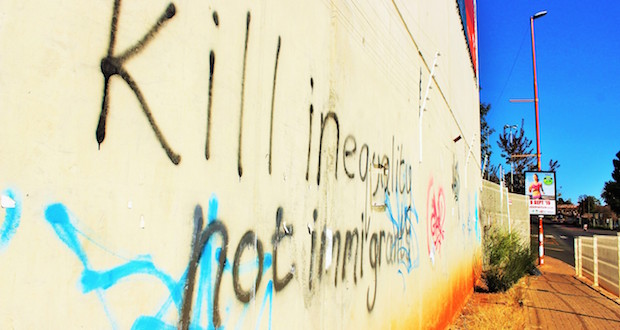 It has been a Â year since the outbreak of xenophobic violence in Kwazulu Natal, which killed seven and displaced about 5,000 others. China Ngubane returned to Durban and spoke to NOMVULA MINELLI, a South African trader at a Durban flea market, about doing business in the midst of police checks and home affairs raids.Â

I was affected in 2015. This is when people looted from my business. Since then, I never managed to recover the loss, and I never managed to get back and do the same business. At the time, there were people willing to compensate for the damage but as they realised that we were speaking Zulu, they withdrew. In our fight to defend other African traders, there were insults from the locals. Nothing has come back to normal.

There are more police coming to the flea market. Yes, it could be that they were doing their own check-ups, which is understandable. If there is no notification that the police will be coming to do [something], I find it degrading that police actually come and grab one or two people that we are trading with.

And when we say to want to know what the issue is the police response is always, â€œThey are breaking the lawâ€. But how do you define breaking a law in a place where it is supposed to be respected for business? The eThekwini municipality or the Market Centre should know that police are coming for sporadic checks or Operation Fiela.

Post-xenophobia attacks, there was a lot of police who were stationed opposite the City Hall. They would look at you, if you are dressed in a certain way and when they greet you and you do not respond in Zulu;Â obviously the communication extends: what is your name, who are you…. This reminds me of the apartheid era.

It could be that there is a certain plan that the municipality and the police have in curbing xenophobia, but from the perspective of a victim, this could be viewed as xenophobic; itâ€™s segregation. It [says] that the flea market is infested with people who are involved in criminal activities, who are there illegally etc. Post-xenophobia, the Department of Home Affairs (DHA) was at the flea market (near the City Hall), ensuring that everybody who is operating a stall is the owner of the stall or they have the right papers. This is not communicated in a formal manner and we get it through rumours. The DHA comes and checks for papers; if you donâ€™t have then you have to go back home and bring them. Isnâ€™t this still apartheid?

The police and DHAâ€™s approach is very selective, and the people who suffer most are the Senegalese, Nigerians and the Mozambicans.

Since the 2015 attacks, there are no changes at all. My understanding of a change is empathy. Now there are leaders who can still go out on media sowing the seeds of division. Looking at the business programme by Minister Lindiwe Zulu, one would question whether it is a sustainable plan. Were we not given RDP houses as part of promoting the dependency syndrome? Now, people are also being given assistance in terms of finance and stock to start tuck-shops, but do they understand running that business in the long term? Because money will come in and they will feed [themselves] instead of generating that money to stay in business. In my view, this is creating a problem, because over 80% of South Africans are dependent and live on social grants, so you cannot reason with those people. These are the people who may feel that they need to get rid of all â€œforeignersâ€. And that “foreigner” translates to people who speak Sotho, Venda, or [are] darker skinned people.

Xenophobia is institutionalised and I think the problem lies with the policies that we have; the DTI [Department of Trade and Industry] and NYDA [National Youth Development Agency] are supposed to be helping, but all of these are failing.

There are always means; the issue is in building this social cohesion. People come with different expectations, only to find when they get here that itâ€™s a different story altogether.

Xenophobia also comes as a result of the political climate back home, and this includes people who suffer food shortages and fear for their lives. But how do you tell people that are coming in with pangas and homemade petrol bombs that, no, we are one people? It doesnâ€™t work that way.

We cannot have an African foreigner in Africa.