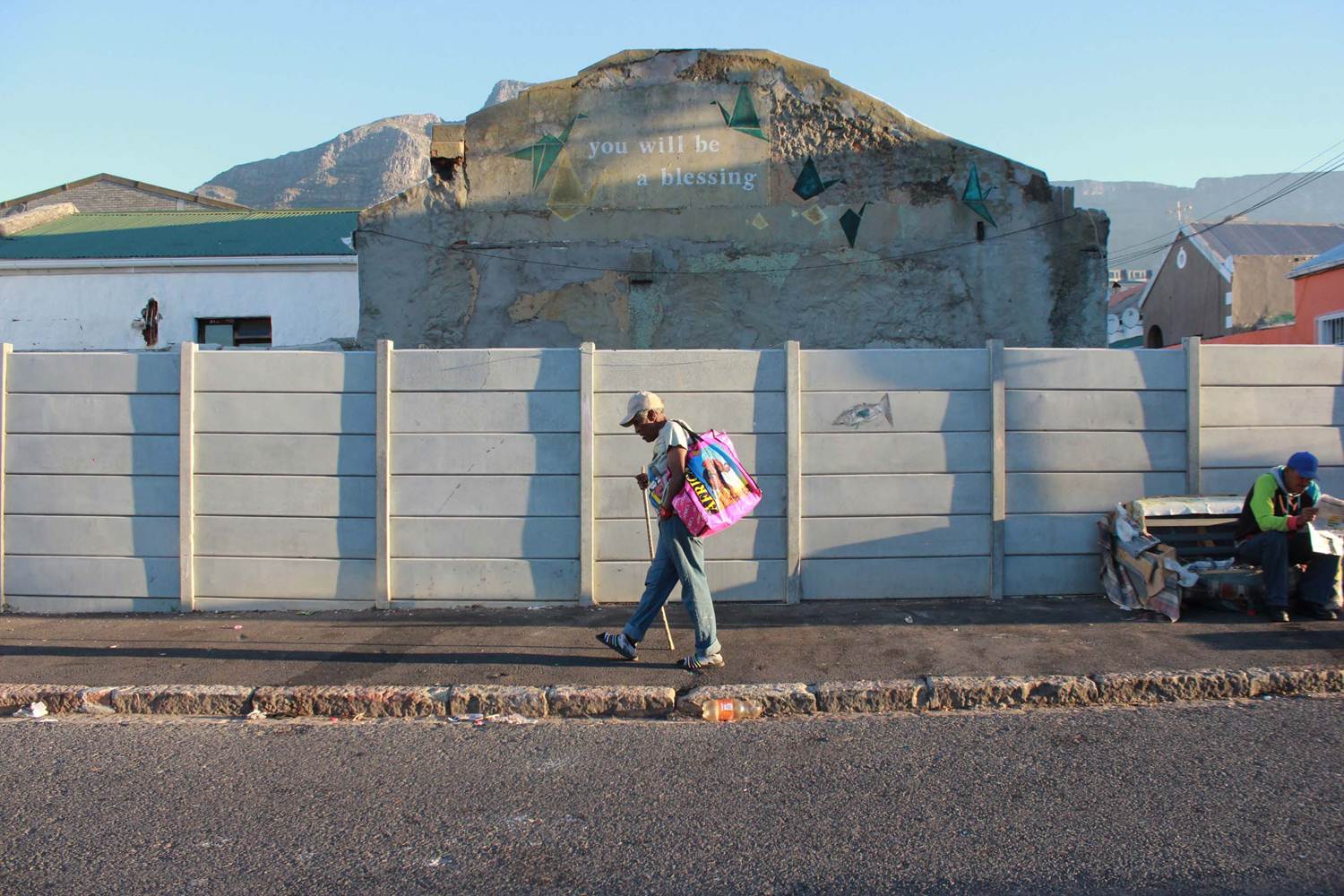 “In District Six people went throughâ€¦ It broke peopleâ€™s hearts. We were pushed around, and some of us moved to Woodstock. Now we sitting in Woodstock and the whole situation is coming back to what it was. What freedom do we have when they taking our homes away? In 1976 I was shot. I fought for the freedom of this country, but we got no gains back.â€ – Mohamed â€œRashidâ€ Sheik Rahim, 51, unemployed, Woodstock â€œItâ€™s just in words democratic, but each one hasnâ€™t been given their own equal rights. We had the Freedom Charter that said â€˜the people shall governâ€™ the country, but this has not happened.â€ – Mohamed â€œRashidâ€ Sheik Rahim, 51, unemployed, Woodstock

There shall be peace and friendship! â€œNo, we donâ€™t have freedom, because most of the people is still living in the past. The old regime, old grudges, whatever, they still live according to that.â€ – Dante Myburgh, 40, construction worker, Elsies River â€œHow can the youth enjoy the new South Africa? Imagine me and him are having an argument, we are both men. Now, why must you put racism in there? Itâ€™s a white issue, itâ€™s a black issue, itâ€™s apartheid issue. No, leave the pastâ€- Dante Myburgh, 40, construction worker, Elsies River

There shall be houses, security, and comfort! â€œSouth Africa is not free now. I donâ€™t have rights. You see now, four people in one room, and they share one toilet. No education, look we selling the sheep and itâ€™s four children. Like now, I donâ€™t have a grant and I have four children. Thereâ€™s still racism and no one comes to ask how we feel.â€ – Victoria Hlathana, 50, informal trader, Langa â€œThings are better now than they were before, there is change. Now we donâ€™t go to jail, before we go to jail if we selling umqombothi (traditional beer). We work now, and when we selling the sheep, nobody comes to throw our work away.â€ – Victoria Hlathana, 50, informal trader, Langa

All national groups shall have equal rights! â€œWeâ€™re an interracial couple, we worry when we have to look for accommodation whether the kids will be accepted. I want the kids to be where they are accepted, instead of asked why you darker or why you lighter.â€ – Patricia Nielsen, 43, stay at home mom, Century City â€œSouth Africa is a free country, itâ€™s just a couple of stereotypes are keeping people where they are. They are still locked up in the idea that they are not free. I think freedom in South Africa is a choice, you have to choose to be free.â€ – Patricia Nielsen, 43, stay at home mom, Century City “Freedom is a joke. Leaders know what the freedom is, because they experience freedom. Not us. From day one we didnâ€™t experience any freedom in any way. Especially financial freedom.â€ – Andrew Julius, unemployed, Elsies River All shall be equal before the law! â€œWe left here in 1989 because my husband was offered a very exciting opportunity in London, and I was very worried about what was going to happen in this country, that there would be a violent change-over. We came back four and half years ago because we love the country. My whole family is here, my daughters came with us and now my granddaughter is here, so it just goes to show how much we love it here.â€ – Katrine Collins, 65, Retired, Tamboerskloof â€œOstensibly, yes it is a free country. Thereâ€™s meant to be a democratic government, but thatâ€™s where the problem lies. Under the law there is equality, and I think with the race relations and affirmative action theyâ€™ve done their best. Ironically now, itâ€™s actually harder for whites to get jobs. I think whites, coloureds and Indians have difficulties, so thereâ€™s been a whole reversal.â€ – Katrine Collins, 65, Retired, Tamboerskloof

There shall be work and security! â€œI would say, ‘Yes, we have freedom now.’ I wasnâ€™t around, but itâ€™s just the things I hear from my grandfathers and my grandmothers how things were before. Look now how we talk, back in the day this was not possible. I came here from Durban to change my life, but I donâ€™t have any freedom here on the streets, I donâ€™t have any rights. We living like rats. Freedom to me means equal rights for everyone. I donâ€™t have enough rights, you know? I want to leave from here, and I am free because I can leave.â€ – SifisoNcube, 23, unemployed, Sea Point â€œWe are not free. Poor people arenâ€™t part of the country, because the rich donâ€™t give the poor the chance to use what was meant for them. The only thing to make South Africa a better place is try to be reasonable to all people and donâ€™t look what colour they are, what race, what religion. Just be fair. Iâ€™m living in Mitchellâ€™s Plain now, and the gangs take over. If you donâ€™t join then they take bread from your table. If you sell flowers there, then itâ€™s like you are in a crossfire. You canâ€™t do it.â€ – Nadeem Jacobs, 47, flower seller, Mitchellâ€™s Plain â€œPeople donâ€™t have an understanding. We all made sacrifices, everybody that went through the difficult time of apartheid. You wasnâ€™t allowed to do what you want to do, talk to anybody. When the change came they said they were going to make fairness for everybody. But maybe in the future it will happen.â€ â€“ Nadeem Jacobs, 47, flower seller, Mitchellâ€™s Plain

The doors of learning and culture shall be opened! â€œI think it has progressed in the sense that there is equality in terms of rights and things like that, but in a practical sense I donâ€™t think there is a lot of freedom. People are still living in poverty, people donâ€™t get the same education.â€ – Jessi Williams, 19, student, Lansdowne

â€œI donâ€™t know if we should celebrate yet, thereâ€™s still a lot of work to do. Just because time has elapsed and thereâ€™s democracy, it doesnâ€™t mean that everything is right yet. Itâ€™s hard to say. I guess in South Africa, we do have a lot of opportunities that we didnâ€™t have before. I suppose, thereâ€™s opportunities, but not everyone can get themâ€ Amalia Krupandan, 18, student, Sybrand Park â€œWe do have freedom, but not everybody is able to get access to that freedom. The accent thing still comes up. It happened to me a month ago. A girl asked me if I was Xhosa and I said yes, and she said â€˜but you donâ€™t sound black thoughâ€™. I got really upset, because how does black sound?â€ â€“ Luvuyo Duda, 18, student, Mowbray

â€œSuperficially we have progressed, there arenâ€™t any obvious forms of suppression, but I think it will take a while for the mentality that was built in people after all those years to be fully gone. I feel like there is still racial tensionâ€ â€“ Tara Nair van Ryneveld, 18, student, Kenilworth â€œYes, we are free because now we have a lot of things. I feel free, because now I vote, I have free school, I have a free home. Iâ€™m not staying in the hokkie (shack), Iâ€™m staying in the flat.â€ â€“ Masibulele Potelwa, 19, student, Langa

All shall enjoy equal human rights! â€œPeople are not treated equally, because we are not staying in the same areas. Some are treated better than others. Itâ€™s not the same, because the whites, they have a lot of things. Blacks donâ€™t have a lot of things. But now we play world cups, we have trance, we make houses. I am free, because I do everything that I want to do in this country.â€ â€“ MasibulelePotelwa, 19, student, Langa