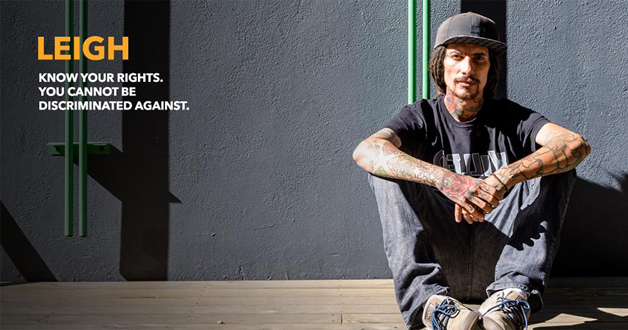 Cape Town has a racism problem. We know that. In a new campaign that seeks to build an inclusive city, the City of Cape Town is trying to do some damage control, but RAâ€™EESA PATHER argues that itâ€™s missing the point.Â

Cape Townâ€™s streets arenâ€™t safe for black people. Tim Osrinâ€™s assaultÂ of Cynthia Jonie â€“ a black domestic worker who was simply walking down the street in his suburban neighbourhood â€“ is just one example of a violent, race-motivated crime thatâ€™s been perpetrated in the city.

â€œThe City of Cape Town has shown leadership and courage by launching this campaign and we challenge all other municipalities to create similar platforms for open dialogue on racism,â€ the DA said in a statement endorsing De Lilleâ€™s initiative.

Capetonians are encouraged to participate in the campaign through social media. The photographs they submit are shared with the words â€œKnow your rights, you canâ€™t be discriminated againstâ€ and â€œDonâ€™t let racists speak for youâ€.

Donâ€™t let racists speak for you. Pledge your support for Cape Town against racism. http://t.co/ORrr0w2o5n

But the campaign hasnâ€™t achieved the widespread support it may have anticipated, and for good reason â€“ it makes victims responsible for the racism they endure, instead of holding racists to account. The Inclusive City project seems to focus on groups who are often accused of racism, encouraging them to stand up and fight against the stereotype, while doing little to include the experiences of people who are excluded from the city as a result of the prevalent racism. In one tweet, the misguided approach of the campaign is strikingly obvious, as one participant claims that racism hurts â€œespecially the tourismâ€ in Cape Town.

In a city where people are denied access to property, are discriminated against at universities, and are shooed away from public spaces, the biggest issue is not that racism hurts tourists, but that it hurts the people of Cape Town.

Through excluding victims of racism in this process to build an â€œinclusiveâ€ city, the City has contradicted itself. Instead â€“ and to its detriment â€“ it has apologised for racists, saying that not everyone is a racist, and disregarding the views of victims whose experiences may suggest otherwise.

Yes, not all people within minority groups are racist, but the subversive nature of racism today also means that not everyone knows when they are being racist.

The infamous incident at the 12 Apostles Hotelâ€™s Azure restaurant, where a black family were at first denied a table even though they had made aÂ reservation, then shuffled off into a corner of the restaurant, and then told to keep their voices down, proves that.

Beyond the narrow scope of the campaign is a wider failure to acknowledge the structural racism that persists in the city.

Verwoerdâ€™s â€œGrand Designâ€ is still alive and kicking, and although the City has partnered with the SA Property Ownersâ€™ Association (Sapoa) to battle spatial exclusion, itÂ needs to show a proper understanding of how racism works before itÂ can tackle the problem.

– Featured image: via City of Cape Town on Twitter.