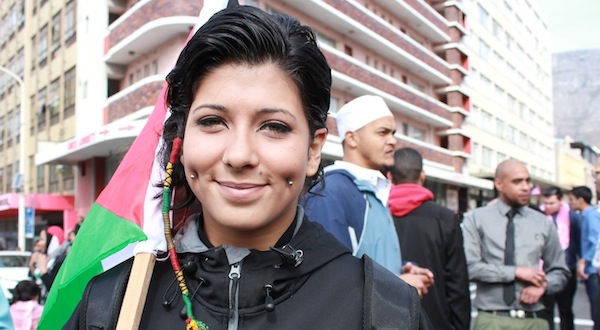 In the wake of Israelâ€™s bombardment in Gaza, Capetonians gathered on Wednesday to demand the end of human rights abuses in Palestine and the expulsion of the Israeli ambassador to South Africa. The march began in District Six and ended outside the gates of Parliament. RAâ€™EESA PATHER spoke to protestors and found out what they thought about the tensions in Gaza. Iâ€™m standing in solidarity with Palestinians trying to put pressure on the government to actually take action, because they offer a really nice rhetoric and moral support for the Palestinians, but I want them to take action now. The struggle I think is very reminiscent of the South Africaâ€™s struggle for freedom, and I think there are such strong parallels between apartheid South Africa and whatâ€™s happening in Israel now. Terrible things happen all over the world, but whatâ€™s happening in Israel is supported by some of the biggest powers in the world like the United States and most Western countries. Itâ€™s a real issue of people being oppressed by the most powerful countries and we need to stand up. Iâ€™m here to support, because I think everyone should show their support. Itâ€™s just inhumane whatâ€™s happening at the moment with the bombs and ordinary people being killed. I think if everyone can stand together then we can make a difference because itâ€™s just unacceptable whatâ€™s happening.

I came to march for Palestine, because Iâ€™ve been doing a lot of research thanks to my friend putting everything on Facebook, and it just touched me, whatâ€™s happening in Gaza. I read a post by a 17-year-old guy on Facebook that said â€œWhen are you coming to kill me? When are you coming to bomb my home?â€. Two days later he died, and that just touched me so much, and then I started doing more research and I had to come to this march. Iâ€™m here to fight for Gaza, for their freedom, because thereâ€™s lots of bombing thatâ€™s happening, theyâ€™re being attacked and their rights are being violated. We need to support them because weâ€™re like family, and all of the same religion. But itâ€™s not about religion, itâ€™s all about freedom and being human.