Home Sport We asked grade 4s to draw Caster and what they did is...
WhatsApp
Facebook
Twitter
Email
Print 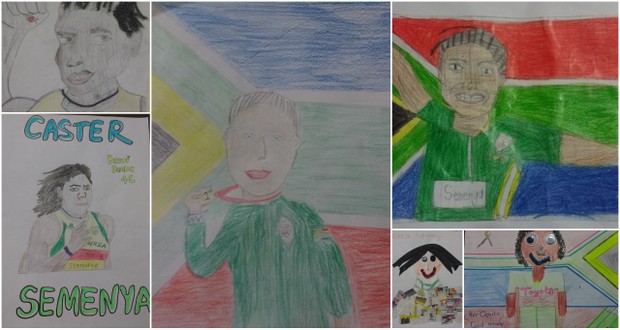 When Caster Semenya won Olympic gold last Sunday, the whole country lit up with pride – and its children were no exception. The Daily Vox visited a primary school in Johannesburg and asked a few grade 4s what they think of South Africa’s star athlete.

First, we asked them who Caster Semenya is.

“Sheâ€™s a woman of South Africa, sheâ€™s one of our athletes, sheâ€™s a middle distance runner that runs the 800m. Sometimes she runs the 400m and 1500m. [People are talking about her] because last week in the Olympics, she won a gold medal for South Africa.â€ – Musabbihah, 10

“She is a middle distance runner, she came first place in the 800m and won first place for South Africa.â€ – Dutt, 10

“Caster is a middle distance runner who believes that she can let her dreams come true and nobody can tell her anything. She can fulfilÂ her dreams.â€ – Nooriyah, 9

“Caster Semenya won a gold last week at 2 o’clock. I didnâ€™t watch it [the race], I was asleep, but I heard on the news the next day. I feel so happy because she represented South Africa.â€ – Mariam, 9

What does Casterâ€™s gold mean for South Africa?

“It’s very important for South Africa that she won a gold medal. She doesnâ€™t let us down.
She inspired people to work hard and achieve their goals.â€ – Dutt, 10 “Caster Semenya is a world champion for South Africa because she won a gold medal. Itâ€™s important [for South Africa to win gold medals] because it makes us look famous, I donâ€™t know how to describe it.â€ – Zahra, 10

Can Caster Semenya be a role model?

How do you feel about Caster Semenya?

“She means really a lot, she inspired people to be brave. Sheâ€™s brave because her dream was just to run, she didnâ€™t care about the government. All she wanted to do was run.â€- Ahmed, 10

“I felt happy because she represented South Africa, she really worked hard and gave South Africa a good name.â€ – Nooriyah, 9

Yahya, 10, was not too impressed. “I think Wayde van Niekerk is better than Caster Semenya because heâ€™s a boy.â€

“Many people said that she is not a woman and she was in fact a man so she had to undergo many gender tests. Itâ€™s not fair because she is herself and she knows if sheâ€™s a woman or a man. She is an inspiration because sheâ€™s courageous and strong.â€ – Ameerah, 10

“Nelson Mandela fought for racial equality and Caster Semenya today is fighting for sports to end their warfare on women, on human biology, that she has fought for seven years. I think that her gender testing wonâ€™t matter if she wins or loses because sheâ€™s not going to listen to anyone who says that she must wait for her test results. All she wants to do is run and win for South Africa.â€ – Zahra, 10.

Editor’s note: The Daily Vox obtained written permission from the parents of all the children quoted in this piece.